Feb 27, 2012 2:42 AM PHT
Facebook Twitter Copy URL
Copied
Party leaders expect that the victory of their future presidential bet will make them a ruling party 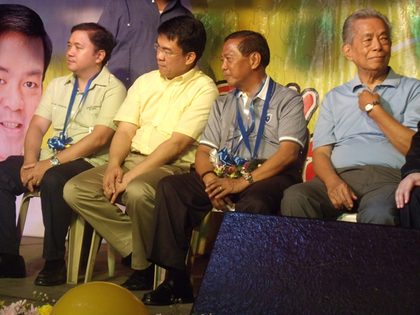 MANILA, Philippines – The Partido Demokratiko Pilipino-Lakas ng Bayan (PDP-Laban) expressed confidence that it will eventually become the country’s reigning political party, as they have the “main force” to make it happen.

At the PDP-Laban’s 30th anniversarry party on Sunday, February 26, party leaders, allies and supporters cheered the early-planned bid of Vice President Jejomar Binay for the presidency in the 2016 national elections.

Partymates shared to the crowd some good words for their chairman and presidential bet.

Supporters, on the other hand, gave Binay a standing ovation and chanted his name.

PDP-Laban president and Sen. Aquilino “Koko” Pimentel has made it clear that there’s no other way for the party to rise but through the presidency. “Pag ang party po ay hindi naka-capture ng Malacanang, eh patapilok na po sila (If the party fails to capture Malacanang, then they are doomed),” he said.

PDP-Laban secretary-general Jose de Venecia III also reflects assurance as to the party’s fate. “We have to accept the fact that we will eventually become the ruling party of this country,” he told his cheering crowd of allies and supporters.

The party has enough reasons to believe in their candidate. In the 2010 national elections, Binay pulled off a surprise victory in the vice presidential race when he defeated frontrunners Mar Roxas and Loren Legarda.

But it’s not all about confidence, as De venecia pointed out that “it is important for a political party [not only] to be ambitious, but [also be] cautious.”

Aside from announcing their presidential bet early, PDP-Laban has also declared that they already have at least 18 possible candidates for the senatorial race. Party leaders declined, however, to identify who these senatorial hopefuls are, claiming that it is too early to discuss the line-up.

De Venecia also said that they still have to study trends in surveys in determining their lineup. “As a former senatorial candidate, I know we [have to] study the survey,” he said. De Venecia ran and lost in the 2010 senatorial elections.

But de Venecia explained that the party is focused now on the local level. “Local coalition works better than the national coalition at the moment this early,” he said. – Rappler.com