Sep 11, 2017 6:41 AM PHT
Agence France-Presse
Facebook Twitter Copy URL
Copied
(UPDATED) Irma is threatening dangerous storm surges of up to 15 feet (4.5 meters), enough to cover a house, as it collides with Florida after sowing devastation through the Caribbean 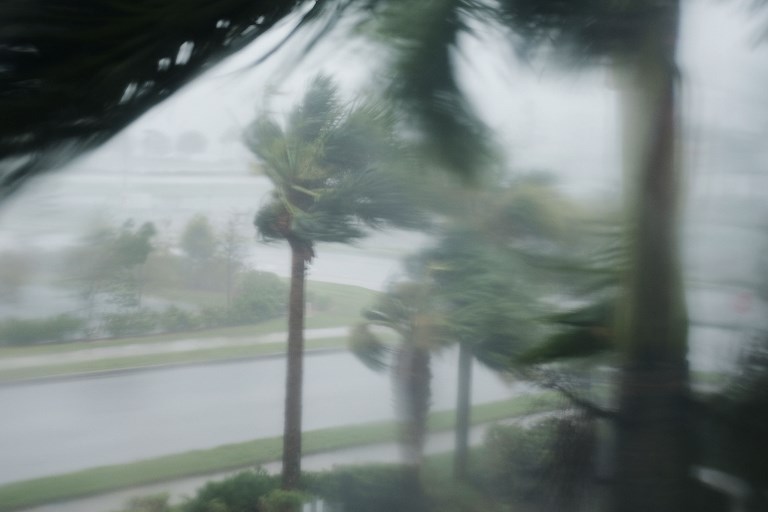 MIAMI, USA (3rd UPDATE) – Hurricane Irma toppled cranes, swallowed streets and left millions without power Sunday, September 10, as it unleashed its terrifying fury on the US state of Florida after wreaking a trail of death and destruction through the Caribbean.

Six million people have been ordered to flee the path of the hurricane – one of the biggest evacuations in US history – which is expected to trigger massive storm surges through vast swaths of the Sunshine State.

Irma was packing dangerous winds of up to 105 miles (169 kilometers) per hour as it neared Fort Myers late Sunday, a major tourist destination in southwestern Florida.

Although Irma was downgraded to a Category Two storm, it was expected to remain a hurricane through at least Monday, September 11, with a turn to the north-northwest overnight, according to the National Hurricane Center.

The storm killed 3 people when it struck the southern Florida Keys island chain as a more powerful Category Four earlier in the day.

About 3 million people were without power throughout the state, according to utility company Florida Power and Light, which said it had “safely shut down” one of two nuclear reactors at its Turkey Point power plant.

Handfuls of holdout residents, having defied calls to evacuate, hunkered down as Irma tore over the Keys, ripping boats from their moorings, flattening palm trees and downing power lines across the island chain popular for fishing and scuba diving.

Hours later, the storm made a second landfall on Marco Island near the beach resort of Naples, unleashing high winds and rain across southern Florida and cutting power to two million people as it moved up the western Gulf coast.

One of the mightiest hurricanes ever to slam the state, Irma is threatening dangerous storm surges of up to 15 feet (4.5 meters), enough to cover a house, as it collides with Florida after sowing devastation through the Caribbean.

“I am concerned about people that don’t believe in the storm surge,” said Virginia Defreeuw, 76, who fled her mobile home in Naples to a shelter. “You need to be afraid of the storm surge! People are not listening.”

While southwest Florida bore the deadly brunt of Irma’s wrath Sunday, the coastlines of Miami and the neighboring island of Miami Beach were heavily inundated by storm surges as hurricane winds sent two giant construction cranes crashing down.

The sea swallowed the coastal walkway of glitzy Brickell Avenue in the center of Miami, flooding the streets and leaving cars half-submerged.

At least 30 deaths are already attributable to the storm. The US victims included a sheriff’s deputy killed in a head-on collision early Sunday as she drove home for supplies after working in a shelter all night.

Irma smacked the Keys 57 years to the day that Hurricane Donna hit the same area in 1960, destroying nearly 75% of the island chain’s buildings.

A shelter of last resort set up in the Middle Keys city of Marathon was reported to be without power or running water, and surrounded by surging waters.

Irma also led to some uniquely Floridian responses, with a sheriff forced to warn residents not to shoot at the storm after an online prank promoting the idea went viral.

“To clarify, DO NOT shoot weapons @ #Irma,” the office of the sheriff of Pasco County, on the state’s west coast, tweeted hours before landfall.

In Miami, where emergency services were sheltering in place, a dispatcher talked a woman through delivering her own baby on Sunday morning, Assistant Fire Chief Eloy Garcia told the Miami Herald.

Before reaching the United States, Irma smashed through a string of Caribbean islands from tiny Barbuda on Wednesday, to the tropical paradises of Saint Barthelemy and Saint Martin, the US Virgin Islands, Puerto Rico, the Dominican Republic, Haiti and the Turks and Caicos.

Terrified Cubans who rode out Irma in coastal towns – after it made landfall Friday on the Camaguey archipelago as a maximum-strength Category Five storm – reported “deafening” winds, uprooted trees and power lines, and blown rooftops.

There were no immediate reports of casualties in Cuba but it caused significant damage, and enormous waves lashed the Malecon, Havana’s emblematic seafront, with seawaters penetrating deep into the capital.

Residents in the old colonial city were waist-deep in floodwaters after Irma cut power and forced the evacuation of more than a million people.

Irma is so wide that authorities faced destructive storm surges on both coasts of Florida and the Keys as it follows a path north toward Georgia.

Businesses on both Florida coasts were shuttered while Miami airport was closed and not expected to reopen until Tuesday.

MacDill Air Force Base in Tampa, the military installation home to US Central Command, issued mandatory evacuation orders ahead of the storm’s passage early Monday, September 11, while the Kennedy Space Center on the east coast was also closed. – Rappler.com