Sep 11, 2017 2:16 PM PHT
Camille Elemia
Facebook Twitter Copy URL
Copied
Senator Richard Gordon says former Customs chief Nicanor Faeldon is not disrespecting the Senate despite his insistence that he would not face the probe because of Senators Panfilo Lacson and Antonio Trillanes IV 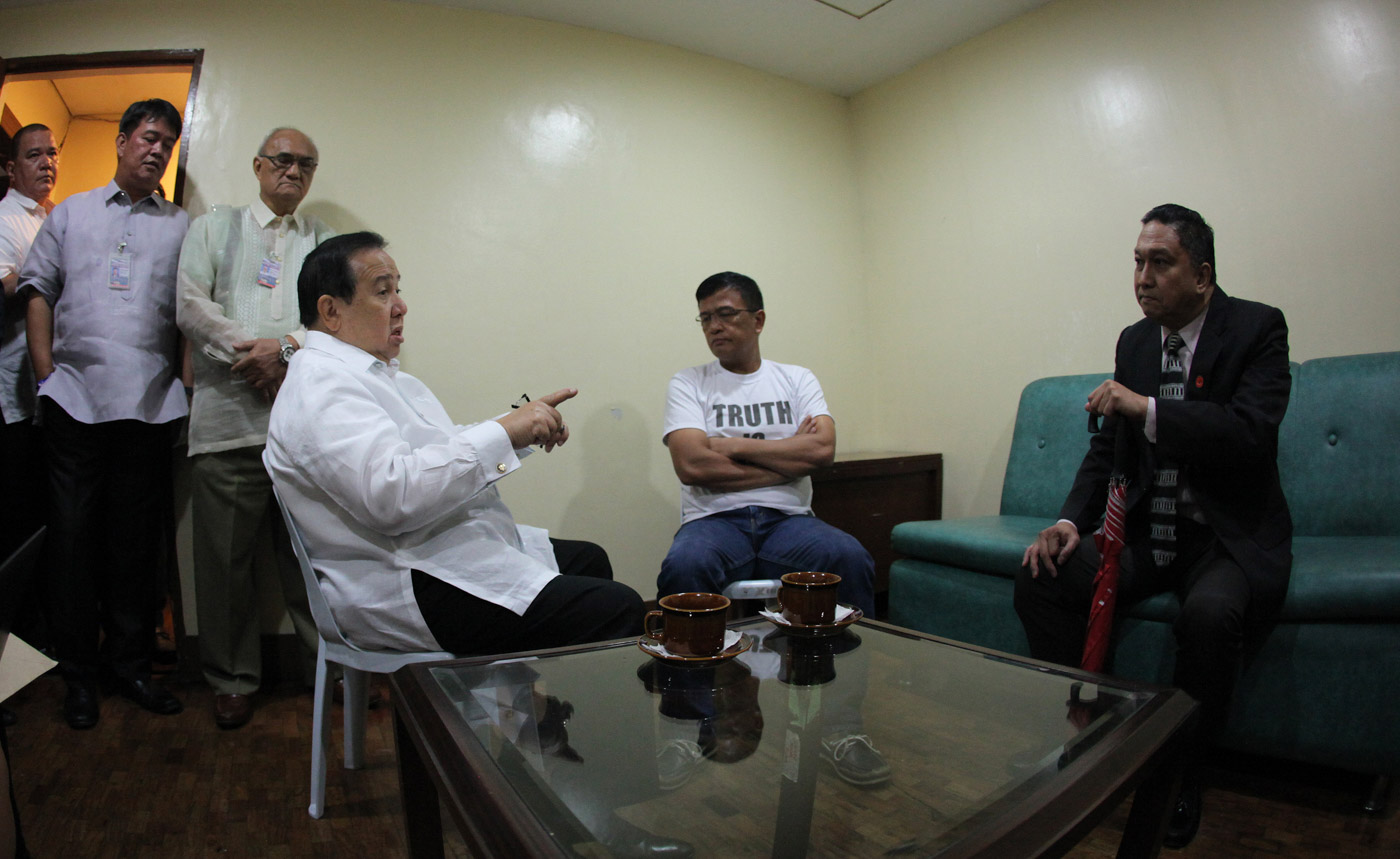 MANILA, Philippines – The Senate detained former Customs Commissioner Nicanor Faeldon, who was earlier cited in contempt after repeatedly skipping Senate investigations despite the issuance of a subpoena.

Faeldon turned himself in at the Office of the Senate Sergeant-at-Arms on Monday, September 11, and insisted he would not face the ongoing probe into the corruption at the Bureau of Customs.

Senate blue ribbon committee chair Richard Gordon personally talked to Faeldon to convince him to face the panel but the latter refused.

“I spoke to him para kako yung side mo marinig at lugi ka kung di ka aakyat. Sabi nya respetado naman nya Senado at handa sya magstay dito at makulong. Pero pakiramdam nya habang nandito, di sya mananalo dito,” Gordon told reporters after the meeting. (I spoke to him and told him to face the panel so his side could be heard and that he will be at the losing end if he does not go up. He said he respected the Senate and he was ready to stay here and be detained. But he felt while he was there, he won’t win.)

Gordon said Faeldon would rather face the court than the Senate, as Faeldon lamented the unfair playing field in the chamber. Faeldon supposedly cited Senators Antonio Trillanes IV and Panfilo Lacson’s allegations against him.

“Hindi siya nagmamatigas, humble, magalang. Sabi niya yun ang desisyon niya, sinulat na daw nya sa akin at sa committee na di sya haharap, sa husgado na lang sya mag-aabang,” Gordon said. (He was not firm. He was humble, respectful. He said that was his decision and he wrote to me and the committee to say he won’t attend the probe. He would just face the court.)

Gordon said Faeldon would be detained in the Senate indefinitely, until he decides to face the panel or until the “Senate says [he] may go.”

Asked about it, Gordon said Faeldon’s insistence is not a disrespect to the Senate. The senator also claimed Faeldon “respects” the chamber except for two of its members.

“No, he was very respectful. [He said] I respect the Senate except the two: Lacson and Trillanes,” Gordon said.

Gordon also defended Faeldon and said the former Customs chief was not defying the chamber.

“He did not defy the Senate, he’s just not willing to go to the Senate na nandyan yung dalawa (while the two are there),” Gordon said.

“Napaka-unfair na husgahan na raw sya ng lahat ng bumoto kay Senator Lacson at Trillanes. Wala na siya kalaban laban doon. Para manalo sya sa husgado nya ifi-file,” Gordon said. (It was unfair that he would be pre-judged by all those who voted for Lacson and Trillanes. He did not have a fighting chance there. For a chance to win, he would a case in court.)

Trillanes earlier said Faeldon is “at the heart” of the P6.4-billion worth of smuggled shabu from China while Lacson said Faeldon is among the officials receiving “tara” or bribe money.