Sep 11, 2017 6:52 PM PHT
Camille Elemia
Facebook Twitter Copy URL
Copied
The justice secretary is caught on camera texting a VACC member to expedite cases against the opposition senator – cases whose probable cause will be determined by Aguirre's office 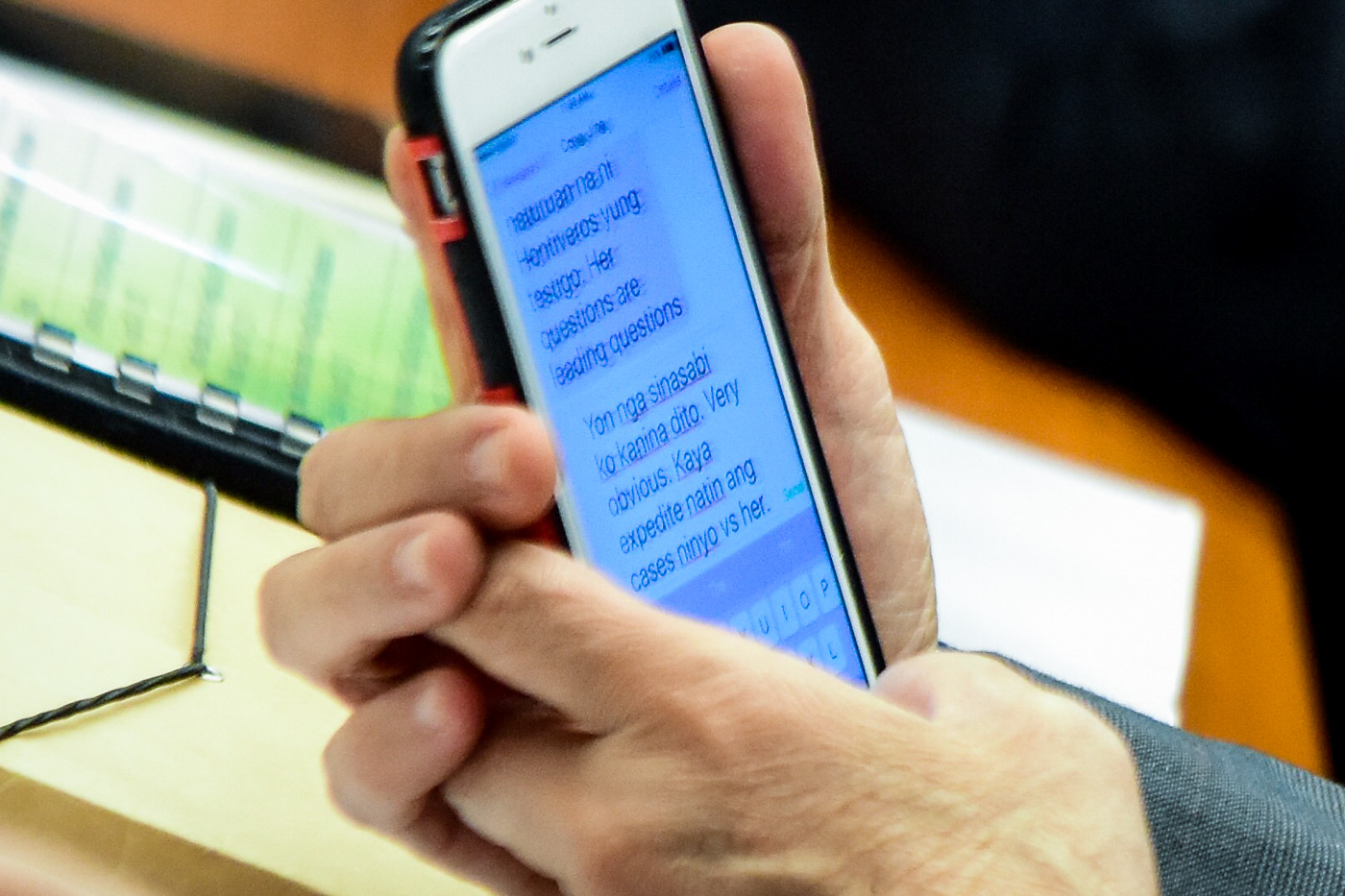 MANILA, Philippines – Justice Secretary Vitaliano Aguirre II was caught on camera, texting a member of the pro-administration Volunteers Against Crime and Corruption (VACC) of the need to “expedite” the cases against opposition Senator Risa Hontiveros.

What’s worse, Hontiveros said, was that Aguirre was caught sending the message while the Senate probe into the death of 17-year-old Kian delos Santos was ongoing.

Hontiveros presented a photo on Monday, September 11, during a privilege speech calling for Aguirre’s resignation. She said Aguirre violated Republic Act 6713 or the Code of Conduct and Ethical Standards for Public Officials and Employees. (READ: Hontiveros asks justice secretary Aguirre to resign)

The photo was taken last Tuesday, September 5, during a Senate public order committee hearing, where Aguirre was one of the resource persons present.

“The photographer was inadvertently able to capture the text message exchange on the screen of the phone of the DOJ secretary,” Hontiveros said.

Aguirre was seen texting someone named “Cong Jing,” who turned out to be former Negros Oriental Representative Jacinto “Jing” Paras, a VACC member.

Paras’ message, as can be seen in the photo, read: “Naturuan na ni Hontiveros yung testigo (Hontiveros already coached the witnesses). Her questions are leading questions.”

Hontiveros said experts authenticated the photo but did not say who these experts are.

(While we’re conducting a hearing to pursue justice for a 17-year-old who was killed, facing down, by the police, it seems our justice secretary was busy plotting how to get back at his enemies.)

“Hindi ako magtataka kung sa mga susunod na araw ay may mga kaso nang isasampa laban sa akin si Justice Secretary o ang kanyang mga galamay sa VACC (I would not be surprised if in the next days there will be cases filed against me by the Justice Secretary or his minions in the VACC). If the justice secretary wants to file cases against me, see you in court, Mr Aguirre!” she said.

The senator said Aguirre’s actions are “unethical” and “so unbecoming” of a government servant, as he is the head of the principal law agency of the state.

“Kung ang opisina niya ang nagpapasya kung tutuluyan ang kaso laban sa akusado (Since his department decides whether or not charges against someone should be pursued), anyone with that kind of power must hold himself to the highest standard of impartiality. But this is apparently not important to the good secretary. Siya po ay nakikipagkuntsabahan sa isang grupo para magsampa ng kaso – kaso na opisina din niya ang magpapasya kung may probable cause o wala (He is conniving with a group to file cases – cases that his department would assess and then determine if there is probable cause or not). There are no words for this kind of lutong macau. There are no words!” Hontiveros said.

The VACC was also responsible for the impeachment complaint filed against Chief Justice Maria Lourdes Sereno. The group also announced it would file a complaint against Ombudsman Conchita Carpio Morales.

Aside from Paras, other members include Dante Jimenez and lawyer Ferdinand Topacio.

On Thursday, September 7, Paras and Topacio went to Hontiveros’ office to get the witnesses in Delos Santos’ slay from the senator despite consent letters from the two minors’ mother, father, and adult sister. They were, however, unsuccessful as the witnesses were turned over to Caloocan Bishop Pablo Virgilio David. – Rappler.com