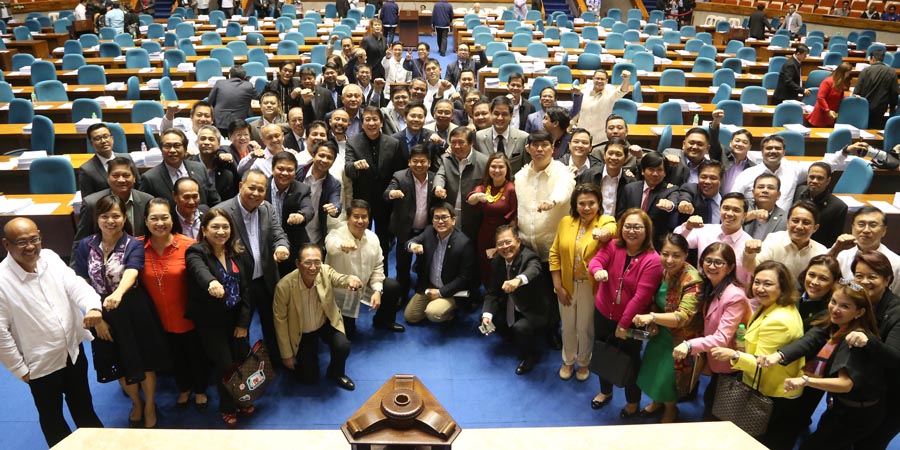 MANILA, Philippines – Despite stormy weather in Metro Manila, the House of Representatives passed on second reading the proposed 2018 national budget on Tuesday, September 12.

The House pushed through with the last day of budget debates on Tuesday despite the suspension of work in almost all other government offices. (READ: How will government fund the 2018 budget?)

From here, “small committees” will be discussing and processing individual amendments to the proposed budget. (READ: ‘Build, build, build’ gets a third of proposed 2018 national budget)

House appropriations committee chairman and Davao City 1st district Representative Karlo Nograles said they expect the bill to be approved on its 3rd and final reading by September 21.

The last roll call held on September 12 at 4pm showed 236 out of the 294 House members present, according to Nograles.

Plenary debates for the 2018 budget began earlier last week. Legislators have debated over HB 6215 from 10 am each day until late into the evening and in at least one instance, into the wee hours of the morning.

Prior to this, the appropriations committee held hearings on the budgets of each department.

According to a breakdown from Majority Floor Leader and Ilocos Norte 1st District Representative Rodolfo Fariñas, legislators spent 83 hours and 43 minutes deliberating on the budget.

At least 3 agencies – the Commission on Human Rights, the Energy Regulatory Commission, and the National Commission on Indigenous Peoples – were given a mere P1,000 to work with in 2018.

Once passed, the budget will be transmitted to the Senate, which is also holding its own deliberations on the budget. The Senate will eventually pass its own version of the proposed 2018 budget.

Should there be any differences between the two chambers’ budgets, it will be ironed out through a bicameral conference, which representatives from both Houses will attend. – Rappler.com