Sep 14, 2017 4:15 PM PHT
Chrisee Dela Paz
Facebook Twitter Copy URL
Copied
(UPDATED) While Budget Secretary Benjamin Diokno is not worried over conflicts on the proposed budget of the Commission on Human Rights, a foreign business leader says the issue is 'not sending the right signals' to investors 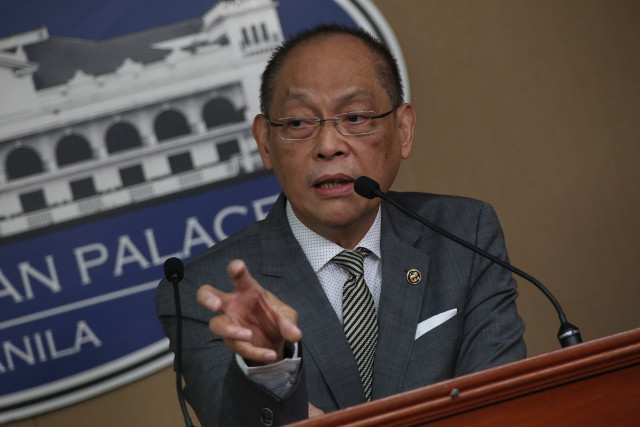 MANILA, Philippines (UPDATED) – Budget Secretary Benjamin Diokno said a deadlock over the 2018 budget is unlikely to happen, as the Senate and the House of Representatives will likely find common ground on the budget of the Commission on Human Rights (CHR).

A deadlock would mean reenactment of the P3.35-trillion 2017 budget, if the P3.76-trillion 2018 General Appropriations Act (GAA) would not be passed.

“I don’t think it will happen,” Diokno told reporters on the sidelines of the Arangkada Philippines Forum 2017 in Pasay City on Thursday, September 14.

“At this time, I’m not worried about what’s going to happen. I’ll just look at what will come out of the third chamber (bicameral conference committee). Let’s not speculate on what’s gonna happen,” he added. (READ: How the House voted for a P1,000 CHR budget)

On Wednesday, September 13, Senate Minority Leader Franklin Drilon warned of a possible deadlock in the 2018 budget, should the House insist on a P1,000 budget for the CHR, the constitutional body mandated to look into alleged abuses by state forces.

While the House approved a measly P1,000 budget for the CHR, the Senate vowed to restore the proposed P678-million allocation.

“The budget process is like this – we submit the budget to the House, copy-furnish the Senate, so the House, under the Constitution, has the first crack at the budget. If there are disagreeing provisions, they will form what is called a [bicameral] conference committee or what we call the third chamber,” Diokno said.

The committee will be composed of lawmakers from the Senate and the House, tasked to reconcile differences and come up with a national budget that is acceptable to both chambers. (READ: Bicol lawmaker: P1,000 budget a ‘wake-up call’ for CHR)

“Under the Constitution, each branch of government – the executive, the Senate president, the senators, the House, plus the constitutional commissions – they can augment. So as long as there is a P1 budget there, it can be augmented,” Diokno said.

While Diokno is not worried over conflicts on the proposed budget of the CHR, the European Chamber of Commerce of the Philippines (ECCP) said slashing the allocation to P1,000 is “not sending the right signals” to investors.

“We will not be able to grow [investments] if we can’t contain peace and order. It is vital to bring businesses here. More so with ASEAN (Association of Southeast Asian Nations) integration, people have more options on where to project their investments,” ECCP president Guenter Taus said in a press briefing.

He pointed out the 14% decline year-on-year in net inflow of job-creating foreign direct investments (FDI) to $3.6 billion in the 1st half of the year.

“We have to look at long-term solutions, meaning that goes with the political stability of the country,” Taus told reporters.

Aside from the CHR, the Energy Regulatory Commission and the National Commission on Indigenous Peoples were also given a P1,000 budget each. – Rappler.com