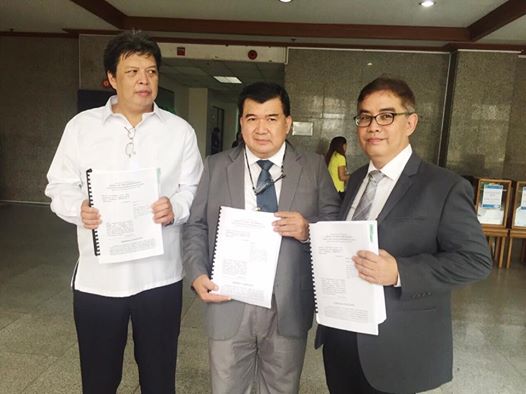 BURI blamed Department of Transportation (DOTr) Undersecretary for Railways Cesar Chavez for “whimsical delays” in the payment of P176 million worth of fees.

BURI won the MRT3 maintenance contract in January 2016. But last August, amid issues of train service interruptions, Chavez told the House committee on appropriations that the government would scrap the P3.8-billion contract with BURI.

Chavez said then that the company “was not procuring the proper spare parts, consumables, and capital spares” for the MRT3.

But according to BURI’s lawyer Redentor Roque, Chavez deliberately caused the undue delay in payments. Aside from the DOTr official, also included in the complaint are Senior Technical Assistant Hernando Cabrera and Program Head Jorgette Bellen.

“Respondents’ concerted acts were intended to achieve their objective of terminating the contract and transferring the same purportedly to the Light Rail Transit Authority (LRTA) despite the fact that BURI is performing its obligations under the contract and performing better than LRT1 and LRT2 in terms of fleet and train availability,” the complaint reads.

BURI added that the unpaid fees could have been used to further improve the MRT3. (READ: MRT3 maintenance provider Busan claims fewer glitches since takeover)

Chavez said he is only being careful with DOTr funds and is still waiting for documents from the Commission on Audit (COA) to clear the payment of fees.

“How can I be charged [with] graft when I am only protecting public funds?” he said.

(Why do I need to be thorough in assessing the billing? To make sure that the spare parts are original, and not “cannibalized”or just taken from other coaches. This is for the safety of commuters.)

Lawmakers earlier questioned the contract signed in January 2016, which was not signed by then transportation secretary Joseph Emilio Abaya. When it lapsed into the Duterte administration, it also did not bear the signature of Transportation Secretary Arthur Tugade.

Under the 3-year contract, the DOTr has already paid BURI about P650 million for its services.

Roque said it is unfair to always blame BURI for MRT3 glitches.

(In the first place, not all glitches are maintenance issues. For example, power glitches, passenger issues, and driver error are not our fault.)

Roque added that BURI has submitted to Chavez its findings that design flaws lead to glitches in the MRT3, but that the undersecretary ignored them as well.

“Maybe he is protecting somebody? Maybe the group responsible for the design flaws,” the lawyer said.

Chavez insisted that BURI’s service is questionable, saying that a P4-million Logic Vehicle Unit (LVU) for the trains’ signaling system provided by the company has no proper certification.

The LVU will not be paid until BURI can provide a Certificate of Origin, Chavez said.

Issues over railway contracts continue to be scrutinized in congressional hearings amid service interruptions that are a hassle for commuters. – Rappler.com