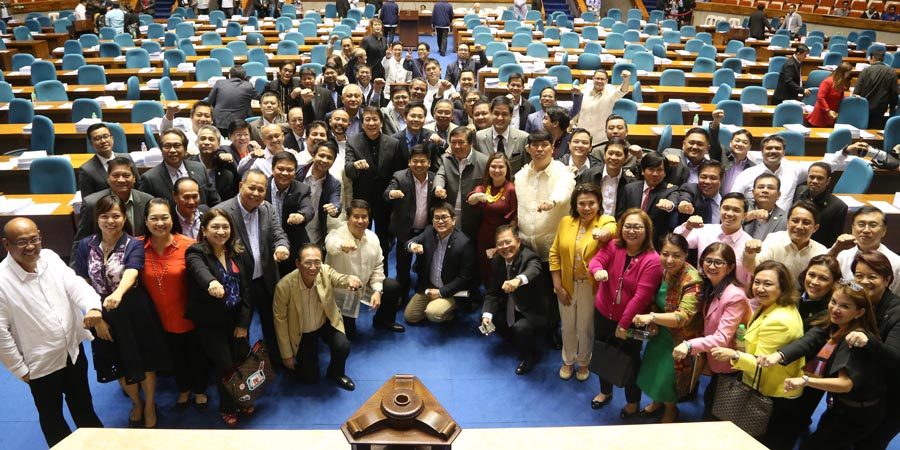 Facebook Twitter Copy URL
Copied
(UPDATED) The House of Representatives agrees to restore the budgets of 3 agencies it earlier cut to a mere P1,000 each for 2018

MANILA, Philippines (UPDATED) – Following a meeting between key House officials and the heads of the Commission on Human Rights (CHR), Energy Regulatory Commission (ERC), and National Commission on Indigenous Peoples (NCIP), the budgets of the 3 agencies would be restored by the time the House passes the proposed 2018 budget on 3rd and final reading.

The announcement was made by House appropriations committee chairman and Davao City 1st District Representative Karlo Nograles in a press release on Wednesday evening, September 20.

The House, during plenary deliberations, decided to allocate only P1,000 for each of the 3 agencies for 2018.

In the statement, Nograles said CHR Chairperson Chito Gascon, ERC Commissioner Geronimo Sta Ana, and NCIP Chairperson Leonor Oralde-Quintayo reached out to both Nograles and Majority Leader Rodolfo Fariñas “to act as bridge between them and Speaker [Pantaleon] Alvarez.”

The meeting happened on Wednesday, a day before the House was set to pass the budget on 3rd and final reading.

During the meeting with Alvarez, Nograles said Gascon agreed that the CHR “should extend its investigations beyond human rights violations allegedly perpetrated by state agents to also include other groups who victimize members of the police, the military, and even civilians.”

“The Speaker basically told Chairman Gascon that we are not the enemy. The Duterte government is not the enemy. We are one with the CHR in the fight against all forms of human rights violations but they must start looking also at the violations committed by criminals and insurgents,” said Nograles in the statement released to media.

The ERC and NCIP, meanwhile, assured Alvarez and Fariñas “that they would start taking all the necessary steps to fight graft and corruption and to carry out the full mandate of their office.”

“The dialogue was very frank but cordial. In the end, the Speaker was magnanimous in his decision and gave the green light to restoring their budget,” said Nograles.

Shortly after slashing the budgets of the NCIP and CHR on the last day of plenary budget deliberations, the House passed the proposed 2018 budget on 2nd reading. From there, a small committee was formed to reconcile amendments to it.

Nograles said the “restored” budgets of the 3 agencies will already be part of the proposed 2018 General Appropriations Bill, which the House is expected to pass by Thursday, September 21.

The House cut the budget of the ERC over controversies surrounding its top officials. Meanwhile, the NCIP budget was slashed because of its supposed failure to address the needs of minorities. Legislators said they cut the CHR budget because it allegedly failed to fulfill its mandate.

Once the House passes its version of the proposed 2018 budget, it will be transmitted to the Senate, which has already begun its own deliberations.

Differences between the Senate and House versions of the budget will be reconciled by a bicameral conference committee.

Nograles earlier said the budgets of the 3 agencies could be used to fund a landmark free tuition law.

At the time the budgets were tackled before plenary, the CHR was asking for P649.48 million, the ERC for P350.95 million, and the NCIP, P1.13 billion. All in all, the budgets of the 3 agencies total more than P2 billion. – Rappler.com