Facebook Twitter Copy URL
Copied
'To keep quiet in the face of evil is a sin,' Archbishop Socrates Villegas says, as Filipinos mark the 45th anniversary of martial law in the face of abuses under President Rodrigo Duterte

MANILA, Philippines – Lingayen-Dagupan Archbishop Socrates Villegas warned that the Philippines is losing its soul to the “Father of Lies and Prince of Darkness,” as he urged Filipinos to wake up to killings, fake news, and other abuses.

In Catholic teaching, the names “Father of Lies” and “Prince of Darkness” refer to Satan.

“We are losing our national soul to the Father of Lies and Prince of Darkness. They are killing the poor and poisoning our consciences. We must return to the Lord and regain our national soul,” Villegas said.

Villegas wrote this in a homily set to be delivered in Dagupan City at noon on Thursday, the 45th anniversary of martial law under dictator Ferdinand Marcos. His Mass is scheduled at the Cathedral of St John the Evangelist in Dagupan City.

Villegas added on Thursday: “We have a right as people to demand change. We voted for change and we want to see it. Keep on demanding for it. Do not relent. Do not tolerate excuses and jokes. Demand for the change promised. Bayan gumising (Nation, wake up)!”

“To keep quiet in the face of evil is a sin,” he said.

It also comes in the face of alleged abuses under President Rodrigo Duterte – including the deaths of more than 14,000 Filipinos in police operations and vigilante-style killings linked to Duterte’s war on drugs.

Villegas, who is turning 57 on September 28, is the outgoing president of the Catholic Bishops’ Conference of the Philippines (CBCP).

He, too, was the 25-year-old private secretary of the late Manila Archbishop Jaime Cardinal Sin when Filipinos ousted dictator Ferdinand Marcos through the bloodless EDSA People Power Revolution of February 1986. Sin helped in mounting this uprising. (READ: EDSA: ‘Hand of God’ seen from the House of Sin)

He later slammed “turncoats” from the martial law era. “Sa mga balimbing hanggang ngayon, walang kupas at walang kahihiyan, maawa kayo sa bayan!” (To the turncoats to this day, the incorrigible and the shameless, have mercy on our country!)

In a Rappler Talk interview on Monday, September 18, Caloocan Bishop Pablo Virgilio David earlier warned against the “killing of conscience,” as many Filipinos condone the killing of drug addicts in predominantly Catholic Philippines.

Read the full text of Archbishop Villegas’ homily below: 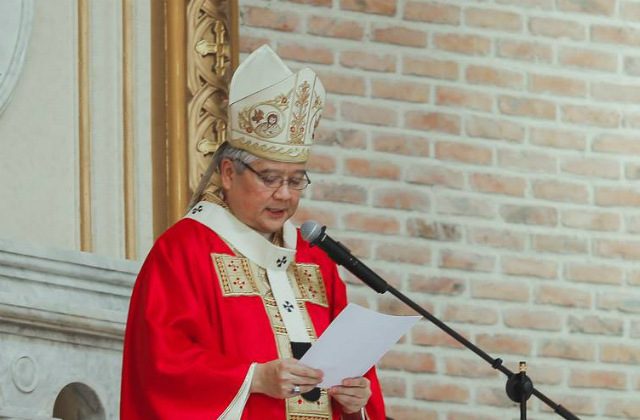 Today is the feast of Saint Matthew, one of the writers of the Gospel. He found Jesus. He followed Jesus. He wrote about Jesus. He died like Jesus offering the Mass and stabbed to death from behind his back.

When we were children 45 years ago, we were compelled to call this day Araw ng Pasasalamat. The vision 45 years ago was a new society – bagong lipunan – where discipline was observed but opposition was silenced. The streets were clean but dead bodies were mixed with garbage in the dumping sites. There were admirable cultural buildings and long bridges across wide rivers but the wheels of justice had stopped turning, and money was the right of a lucky few. Our elders spoke in whispers for fear someone was spying. We had elections but we knew the results even before the ballots were cast. Television and radio were censored and newspapers were controlled.

Martial law destroyed our national values and ruined our integrity. Martial law was sustained by a culture of lies. Martial law stayed afloat by murders in the dark of night and in the light of day.

But those years of murders and falsehood also brought about the best in so many. It made so many of our elders martyrs for freedom and heroes of democracy. When darkness set in, many of our leaders chose to light a candle rather to curse the darkness. Our heroes and martyrs of martial law fought darkness with light and fought evil with the power of good.

They refused to bow down to the authoritarian rule and made the grounds where they stood holy by their courage and conviction. The martial law years made us see the weeds from the wheat, the opportunists from the real patriots, the true Filipinos from the fake ones.

For the martyrs and heroes of martial law, we offer our thanksgiving to the Lord. We are standing on their shoulders, they who died in the darkness without seeing the sunrise. Sa mga balimbing hanggang ngayon, walang kupas at walang kahihiyan, maawa kayo sa bayan!

We have only martial law in Mindanao but the murders are all over more than 13,000 now since last year. Killing the poor and the poorest is the only solution they know to stop crime. Fake news abound and liars succeed to mislead and confuse. Decency has given way to cuss words. The respectful and the polite are ridiculed and the rude and ill-mannered are the new saints. Human rights and the indigenous peoples are worth P1,000.

We must stand up for the real Filipino. Marangal tayo. Magalang tayo. Makabuhay tayo. Matapat tayo. Matapang tayo. We are losing our national soul to the Father of Lies and Prince of Darkness. They are killing the poor and poisoning our consciences.  We must return to the Lord and regain our national soul.

We pray to stay free. We ring bells every night. We light candles. We help the orphans of the killings. But we must do more!

We have a right as people to demand change. We voted for change and we want to see it. Keep on demanding for it. Do not relent. Do not tolerate excuses and jokes. Demand for the change promised. Bayan, gumising!

Wrong is wrong and right is right. When they confuse one for the other, stand up and correct the wrong with courage but with love. Stand up. To keep quiet in the face of evil is a sin. Bayan gumising!