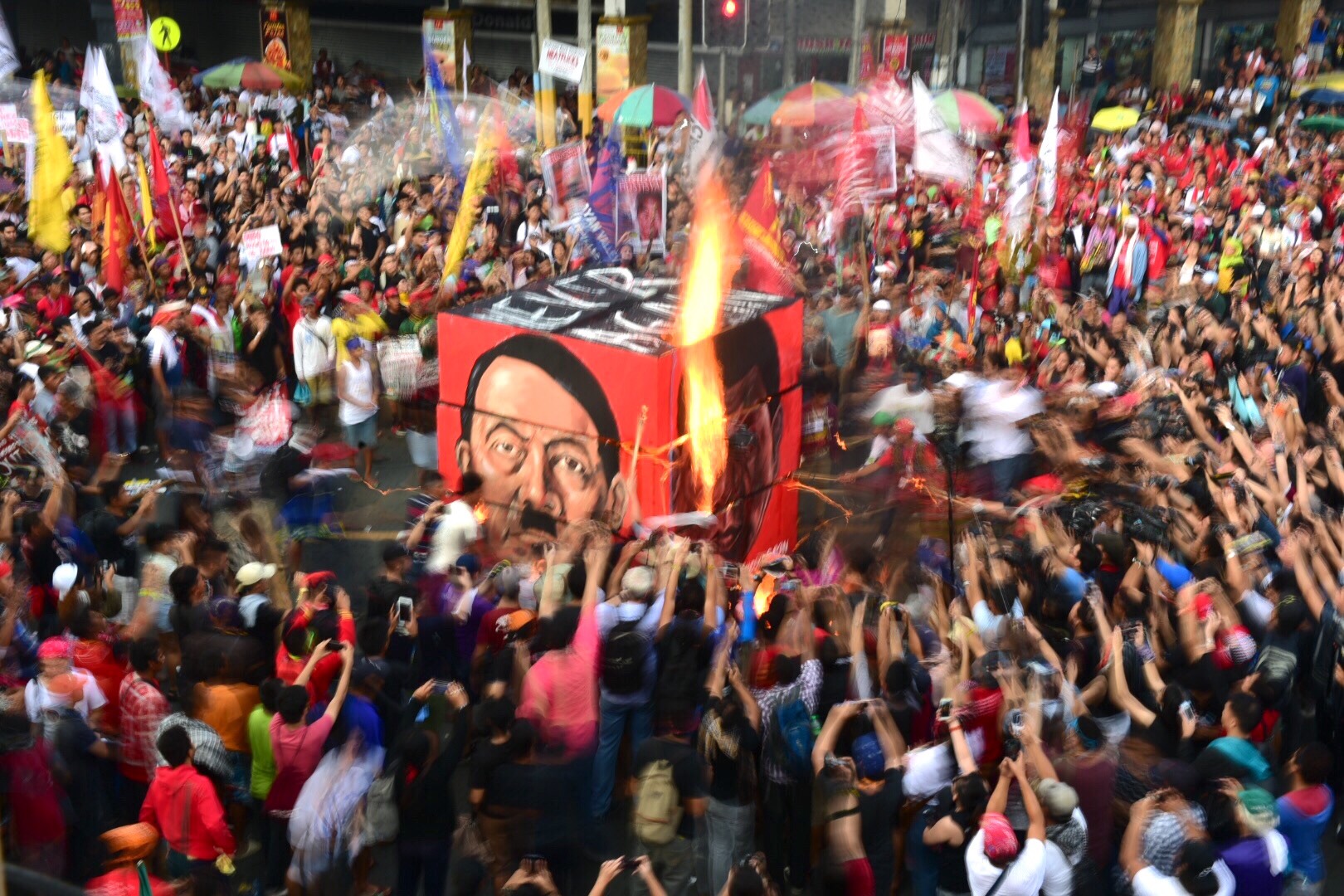 This popular chant during the protest movement against the Marcos regime resurfaced as an effigy in a big rally in Mendiola on Thursday, September 21, the 45th anniversary of the declaration of Martial Law.

The twist? The effigy depicted the “different faces” of President Rodrigo Duterte whom the militant protesters described as an “authoritarian leader and a puppet of the United States” in the mold of the late dictator Ferdinand Marcos.

Dubbed as “Rody’s cube,” the effigy mimicked the 3-D combination puzzle Rubik’s Cube that featured the face of Duterte which could be matched to the images of the strongman Marcos, German dictator Adolf Hitler, and a puppet.

Protesters burned the 10-foot effigy as a symbol of indignation against alleged martial law abuses in Mindanao and the rising number of deaths due to the Duterte administration’s war on drugs, according to organizers.

The war on drugs has already claimed at least 3,500 lives in police operations alone. Various reports by media and rights groups have put the number of drug-related deaths at around 12,000 deaths – including those allegedly killed by vigilantes. (READ: Things to know: Human rights in the Philippines).

(This government seems to be bent on marching towards the path of dictatorship. This government dreams of undermining institutions, silencing critics and the media, and stifling protests.)

The militant leader reminded Duterte to learn from the lessons of Martial Law.

(Fellow countrymen, let’s remind Rodrigo Duterte: What happened to the last president who tried to be a dictator and declared Martial Law? The people ousted him!)

Numerous stories of torture, repression, and enforced disappearances of activists hounded the darkest chapter of Philippines history. About 70,000 people were imprisoned and 34,000 tortured, according to Amnesty International, while 3,240 were killed from 1972 to 1981.

Another Duterte effigy – a skull clad in US flag on wild dogs – was also set on fire by activists on Thursday to protest alleged US intervention in solving the Marawi crisis and in other domestic policies.

Another effigy burns as it marks the end of the program. #martiallaw45 #neveragain #dayofprotest pic.twitter.com/KwjA404TyH

On Tuesday, September 19, activist artists portrayed Duterte as the “Night King,” the main antagonist  of the popular US TV series Game of Thrones, as part of their activities leading up to Thursday’s nationwide protests.  (IN PHOTOS: The Night King)

Effigies have been the centerpiece of rallies organized by the Left against various administrations. Militant groups were initially cautious in creating and burning Duterte dummies when the Left forged an alliance with the Duterte administration.

During Duterte’s first State of the Nation Address (SONA), demonstrators did not burn any effigy of the president for the first time in 15 years. Instead, a 6-panel mural dubbed “Portraits of Peace” served as the main attraction. The murals were meant to convey how the Left welcomed Duterte’s presidency and how hopeful they were of the change he promised.

However, in December 2016, a month after Marcos was buried at the Libingan ng mga Bayani, leftist groups burned the first effigy under the Duterte administration. (WATCH: Left’s 1st effigy under Duterte depicts fascist monster)

The effigy featured the head of dictator Marcos attached to a skeleton to symbolize the “resurrection and rehabilitation of the Marcoses” under the Duterte administration.

The burning of Duterte’s effigy on Thursday symbolized the collapse of the Left’s alliance with the administration. The pivotal moment took place during the President’s second SONA on July 24, when he announced his decision to end talks with the revolutionary Left.

On Thursday, thousands of militant activists joined other groups in condemning Duterte’s alleged acts of tyranny and the spate of extrajudicial killings in the capital and other parts of the country. – Rappler.com