Sep 22, 2017 7:58 AM PHT
Rambo Talabong
Facebook Twitter Copy URL
Copied
The loudest and most repeated call at the Luneta was for President Rodrigo Duterte to end the drug war and assure Filipinos he will not expand coverage of martial law

MANILA, Philippines – Thousands of protesters, led by the Movement Against Tyranny, gathered at Luneta Park on Thursday, September 21, to mark the 45th anniversary of the declaration of Martial Law.

Youth, sectoral, militant, church groups and educational organizations who had members, who experienced first-hand suppression under Ferdinand Marcos’ rule, came to be heard.

The loudest and most repeated call among protesters was for President Rodrigo Duterte to end the drug war and to give assurances he will not expand coverage of martial law in Mindanao to the entire country. 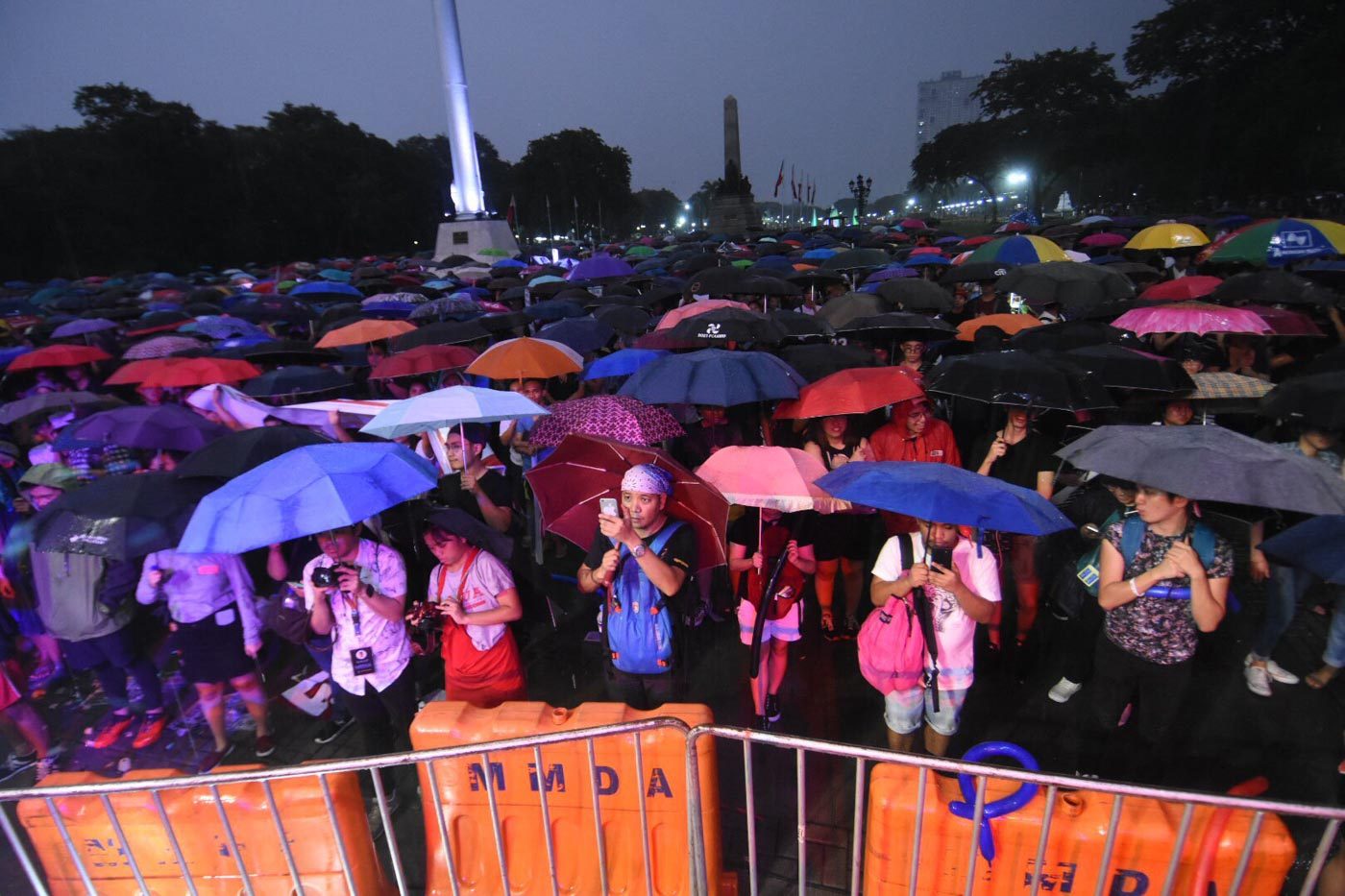 Authorities gave demonstrators the strip of Roxas Boulevard, which divided the Quirino Grandstand from the Rizal Park, for their protest rally.

Amid intermittent showers, the crowd reached a peak of 8,000 according to Manila police, while protesters claimed a much higher 30,000. The organizers initially expected 40,000. (READ: Sept 21 protest organizers to Duterte: Why limit space for rally?)

Present at the rally were people who experienced Martial Law and who are now again beginning to experience fear they felt only during Marcos’ rule. (READ: Except for killings, all crimes drop in Duterte’s 1st year)

One of them is Former St Scholastica’s College president Sister Mary John Mananzan, who condemned the killings related to the drug war. Another veteran from the dark days of the dictatorship, former Bayan Muna Representative Neri Colmenares said he is seeing the same suppression of institutions by the President. (During Martial Law, Marcos did not want anyone to go against him. If he did not like a critic, the critic got imprisoned and killed. Under President Duterte now, whoever disagrees with him, he hits hard, whether you’re Ombudsman, Supreme Court, Congress, Commission on Human Rights, church, media, or activist.)

The old-timers urged protesters from youth groups and educational institutions to continue the fight they had started with EDSA People Power.

Speakers from youth groups then committed to pick up from the work of the veterans. Belle Castillo, daugher of political prisoner Ferdinand Castillo, called for the release of people who do not share the same beliefs as the government, saying “repression” is a tool of the government for power.

Karla Yu of the Millennials Against Dictators group, on the other hand, called for unity and courage in the endeavor.

“Iisa lang ang layunin natin, wakasan ang marahas na rehimen ni Duterte…Ipakita natin na hindi tayo tatahimik. Magkaisa tayo (Let’s be one in ending the violent rule of Duterte… Let us show that we will not be silenced. Let us unite),” she said.

Performers too
With their talents, performers expressed their grievances and made calls to action.

Juan Miguel Severo, a spoken word poet, performed a piece slamming and mocking the dictatorship of Marcos, likening his administration to the story of creation gone wrong.

Mae Paner, a performance artist more popularly known as “Juana Change”, came to the stage wrapped in packaging tape and painted bloody, mimicking the vigilante killings that have swept the nation ever since the administration launched its unrelenting war against drugs. (READ: In the PH drug war, it’s likely EJK when…) (It’s all right with you that I die right? But m*th*rf*ck*r, why did you have to include my child? Me, I’m okay being killed. Don’t you refer to me as society’s plague? An addict?)

The Philippine Educational Theater Association (PETA) inspired the crowd through songs, but taking the highlight was a rendition of the Filipino version of the Les Miserables classic ‘Do You Hear the People Sing?’.