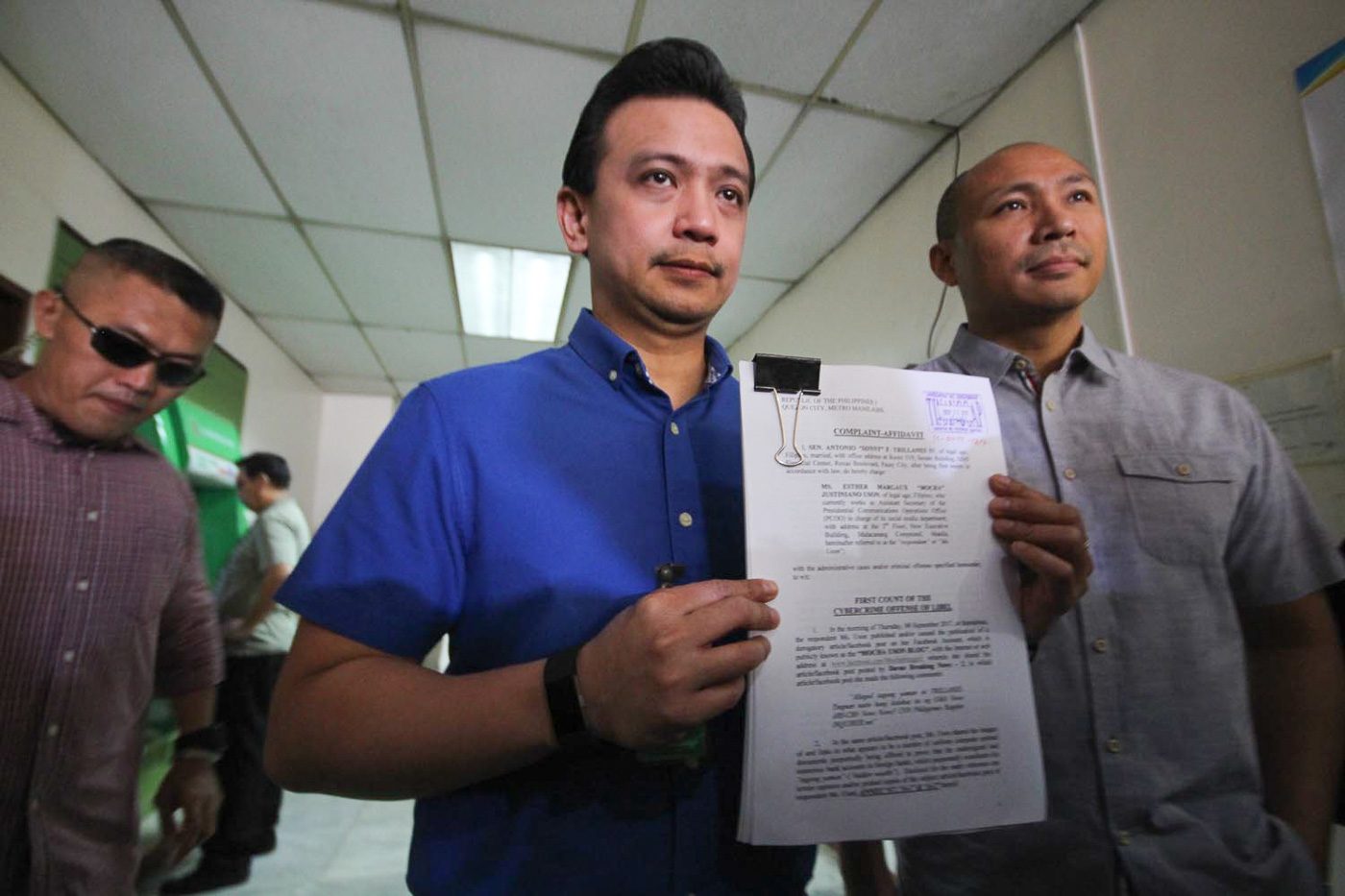 Trillanes filed the charges against Uson 3 days after he went to Singapore to personally disprove allegations of President Rodrigo Duterte and his supporters  that the senator had accounts in two banks there. (READ: Singapore bank says it has no Trillanes account)

The cyberlibel charges stemmed from Uson’s shared post on her popular Mocha Uson Blog on Facebook, which alleged that the senator had a secret bank account in Singapore.

Trillanes said he would also file libel charges against radio commentator Erwin Tulfo, who also shared the post, and a certain Ben Tersiona for spreading fake news about his supposed offshore bank accounts.

When asked why Uson was liable for cyberlibel when she just shared the post, Trillanes said that a different standard applied to Uson, a “senior government official” who is supposedly in charge of government social media.

“As a responsible senior government official, we have a higher standard. The truthfulness of the information should have been verified before it was shared. Let this be a lesson not only for Ms Mocha Uson but also others who have a penchant to share fake news,” the senator said.

He added that Uson cannot separate her social media posts with her official functions because “precisely her job is as head of social media whatever at the PCOO.”

Responding to questions, Trillanes said his move should “definitely not” be seen as an act of censorship.

The senator said he filed a graft complaint against Uson “for using her position to cause undue harm to another party.” He said Uson violated the Republic Act 6713 or the Code of Conduct and Ethical Standards for Public Officials and Employees for continuing her other profession as an entertainer, when she was already a public official.

In filing the administrative complaint against Uson, Trillanes said he was seeking her “immediate dismissal” from the service.

‘Get a good lawyer’

Uson has been criticized for continuing to spread fake unverified news even after she became an official of the Presidential Communications Operations Office. (READ: Asec Mocha Uson herself spreads fake news, says Nancy Binay)

In August, Uson posted a story about a slain cop and asked why members of the opposition did not visit his wake when they had time to personally condole with the family of 17-year-old Kian Lloyd delos Santos, who was killed in a police operation. It turned out that the story on the cop was published over a year ago.

On September 9, Duterte told businessmen in Davao City that he would “destroy” Trillanes with “evidence” of the opposition senator’s supposed bank accounts all over the world.

Nearly a week later, in an interview on government station PTV-4, Duterte bared information supposedly obtained by “another country” that aside from accounts in Malaysia, Australia, United States, and Hong Kong, Trillanes has accounts in Shanghai, Zurich and Geneva in Switzerland, Singapore, the Cayman Islands, and the British Virgin Islands.

Trillanes had consistently denied the allegations and submitted bank secrecy waivers to the Anti-Money Laundering Council and the Office of the Ombudsman to scrutinize his local and foreign bank accounts. – Rappler.com