Sep 27, 2017 8:44 AM PHT
Lian Buan
Facebook Twitter Copy URL
Copied
To pave the way for its investigation, the SC rejects an attempt by Judge Exequil Dagala to resign in 2016 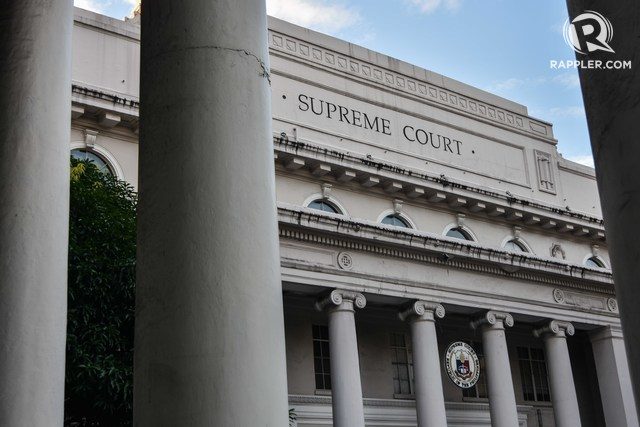 MANILA, Philippines – Judge Exequil Dagala was fired and perpetually barred from office by the Supreme Court (SC) over immorality and gross misconduct charges. He was accused of threatening neighbors with a rifle and having a child with another woman.

Dagala, the presiding judge of Dapa-Socorro, Dapa, Surigao del Norte Municipal Circuit Trial Court (MCTC), was earlier named by President Rodrigo Duterte as one of the judges with alleged links to the drug trade.

Although Dagala’s dismissal is not related to drugs, the SC cites an anonymous complaint accusing him “of involvement in alleged illegal activities.”

“He denied involvement in illegal activities but admitted to owning Sugba Cockpit in Del Carmen, Surigao del Norte, but added that he had sold its rights in 2008,” SC said in a statement. (READ: Sereno expresses concern over Duterte drugs list)

The complaint sent to the Office of the Ombudsman in 2015 triggered the SC’s investigation into Dagala. According to the complaint, Dagala had argued with his neighbor over who owns a lot and the trees planted there.

“Judge Dagala shouted invectives while brandishing an M-16 armalite rifle, which was caught on camera and tape by the other neighbors,” the SC said.

Worse, the Philippine National Police (PNP) Firearms and Explosives Office said that Dagala was not a licensed or registered firearm holder.

“Judge Dagala’s actuations as recorded in the video are unacceptable for a member of the bench and should merit a finding of administrative liability. This is without prejudice to any criminal action that may also be filed against him,” the SC said. The rifle incident is the root of the gross misconduct judgment.

The SC, through the Office of the Court Administrator (OCA), also found that Dagala is guilty of immorality for fathering a child with another woman “during the subsistence of his marriage to his legal wife.”

“The High Court said that it does not seek to interfere with a judge’s relationships but nevertheless stressed that immorality is a valid ground for sanctioning members of the Judiciary because it (1) challenges his or her capacity to dispense justice, (2) erodes the faith and confidence of the public in the administration of justice, and (3) impacts the Judiciary’s legitimacy,” the SC said.

In his answer, Dagala said that he fathered 3 children with 3 different women “with no remorse.”

“According to the OCA, while Judge Dagala may be excused for having sired two children prior to his marriage, the record was clear that he had his third child during the subsistence of his marriage with his legal wife,” the SC said.

The SC also said Dagala had tried to resign from his position as early as 2016 but the High Court rejected it to pave the way for its investigation. – Rappler.com