Power struggle in CHED after Vitriolo returns as executive director

Sep 27, 2017 3:25 PM PHT
Mara Cepeda
Facebook Twitter Copy URL
Copied
(UPDATED) Julito Vitriolo, who was reinstated by the Court of Appeals as CHED executive director, says Chairperson Patricia Licuanan has an 'axe to grind' against him 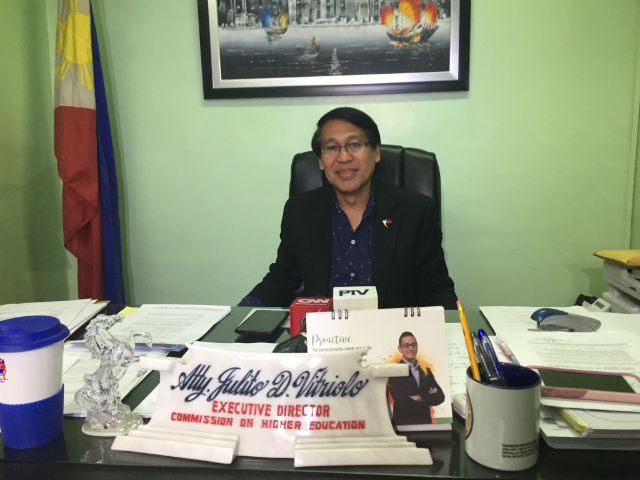 MANILA, Philippines (UPDATED) – Who is the real executive director of the Commission on Higher Education (CHED)?

For Julito Vitriolo, it is him because the Court of Appeals (CA) overturned his dismissal by the Office of the Ombudsman in January. He was “reinstated immediately” by the court on August 17.

Since then, a power struggle for the CHED executive director position has been brewing. Vitriolo has already been working at the executive director’s office, signing documents that Licuanan said CHED will not be recognizing.

Contrary to contents of the CA decision, Licuanan said Vitrolo’s reinstatement is only executory once the court rules on the motion for consideration that complainant Oliver Felix filed on September 13.

“Unless we have the final executory judgement, which will come after the period of appeals, then it is not executory. And that is what we stand by,” said Licuanan.

She claims Vitriolo had Yee’s things forcefully removed from the executive director’s office.

While the mood at CHED has been tense, Licuanan said CHED officials are “civil” in dealing with Vitriolo.

“In relation to the power struggle, we are trying to be as civil as we can. Vitriolo has been with CHED for a long time. I personally feel uncomfortable being unfriendly. But once he starts [issuing statements] for CHED, I draw the line,” said Licuanan.

The Ombudsman had dismissed Vitriolo in relation to the 1996 agreement between the Pamantasan ng Lungsod ng Maynila (PLM) and the National College of Physical Education (NCPE) to operate diploma programs using PLM’s facilities, which was then later found to be irregular.

The Ombudsman found Vitriolo guilty of grave misconduct, gross neglect of duty, incompetence, and inefficiency. He also violated the Code of Conduct and Ethical Standards for Public Officials and Employees for failing to investigate and stop NCPE’s diploma programs.

The CA 12th Division later dismissed these charges after concluding that these were “too harsh” and “disproportionate” to Vitriolo’s offense.

An axe to grind?

Vitriolo, however, believes it’s just right for him to take back his office already.

He cited Presidential Spokesperson Ernesto Abella saying on August 31 that Malacañang “will respect and abide by” the CA’s decision to reinstate him.

CHED commissioners, however, wrote several letters to Malacañang seeking guidance on how to handle the matter.

But for Vitriolo, Guevarra’s statement is merely an opinion. He believes the positions of the Office of the Solicitor General, Department of Justice, or the Office of the Government Corporate Counsel would have more bearing on the issue. None of these offices have issued statements yet.

Vitriolo claims Licuanan has an “axe to grind” against him, thus her refusal to recognize his return as executive director.

“On my part, I don’t see a power struggle because I just went back. I was duly reinstated by the Court of Appeals, but I’m not sure of their (CHED officials) motivation,” said Vitriolo in a separate media interview.

“Because as far as I know, Chair Licuanan has an axe to grind against me. She has actually filed many cases in the Ombudsman against me. So she’s the one which has a personal grudge, or I don’t know, about me. My actions are consistent with the order of the court,” he added.

Vitriolo mentioned Section 27 of Republic Act No. 6770 or The Ombudsman Act of 1989, which states: “Any order, directive, or decision imposing the penalty of public censure reprimand, suspension of not more than one month salary shall be final and unappealable.”

He said only a Supreme Court temporary restraining order or injunction can bar him from returning as executive director.

“I therefore urge Chair Licuanan and those around her to respect and abide by the CA decision if truly she has still respect for the rule of law,” said Vitriolo.

He also denied ordering the removal of Yee’s things from the executive director’s office. Before his return to CHED, Vitriolo said his staff had spoken to Yee’s staff, who were the ones who removed their boss’ things from the office.

Licuanan and Vitriolo have been involved in word wars in the past.

Prior his dismissal, Vitriolo had asked Duterte himself to designate CHED Commissioner Prospero de Vera III as officer-in-charge (OIC) to replace Licuanan, who was barred from attending Cabinet meetings in December 2016.

Malacañang previously asked Licuanan to resign through a memorandum circular given to appointees of former president Benigno Aquino III. Aquino had reappointed Licuanan in 2014, which means her full term extends until 2018.

Licuanan, however, said Vitriolo has a “track record” of undermining past CHED chairpersons.

She claimed Vitriolo had pressured other CHED officials to sign the manifesto urging the President to replace her with an OIC.

Duterte, however, did not respond to this manifesto. – Rappler.com