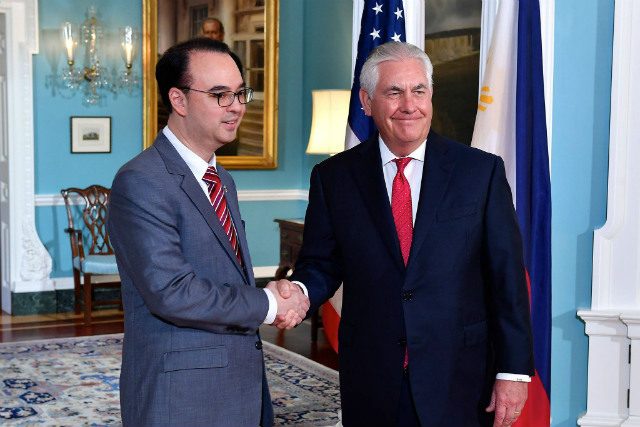 Facebook Twitter Copy URL
Copied
'We made it clear that we have nothing to hide,' Philippine Foreign Secretary Alan Peter Cayetano says after meeting with US Secretary of State Rex Tillerson

MANILA, Philippines – Philippine Foreign Secretary Alan Peter Cayetano told his American counterpart, US Secretary of State Rex Tillerson, that the Philippines is open to a probe into its drug war if investigators will not “politicize” the process.

“We made it clear that we have nothing to hide and that we are ready to work with experts or observers as long as they are independent and fair,” Cayetano said in a statement after his meeting with Tillerson in Washington DC.

“We would welcome experts if they can assure us they would not politicize the investigations because we want to make sure the outcome would be credible,” Cayetano added in the statement released by the Philippine Department of Foreign Affairs (DFA).

Cayetano and Tillerson’s meeting took place on Wednesday, September 27 (Washington time), in the Treaty Room of the US State Department.

Cayetano is undertaking an official visit to Washington DC after speaking for the first time before the United Nations General Assembly in New York.

In his meeting with Tillerson, Cayetano also stressed “that contrary to media reports, the Philippines does not have a state policy allowing extra-judicial killings, especially of illegal drug suspects,” according to the DFA statement.

Tillerson, on the other hand, said the partnership between the Philippines and the US is “on an upward vector.”

This comes as Duterte has slammed the US, especially when it was under President Barack Obama, for supposedly meddling in his bloody anti-drug campaign. Dubbed as “Trump of the East,” Duterte is now enjoying warmer ties with US President Donald Trump. – Rappler.com