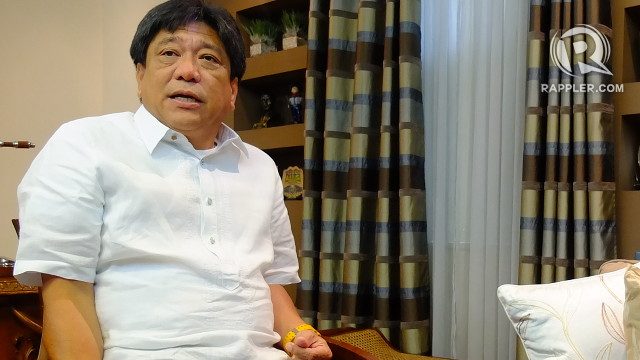 MANILA, Philippines (UPDATED) – Proceso Alcala, who served as secretary of the Department of Agriculture (DA) under the Aquino administration, has been barred from holding any government post.

The Office of the Ombudsman, in two separate decisions, found Alcala guilty of grave misconduct and conduct prejudicial to the best interest of the service.

The Ombudsman, in a statement on Monday, October 2, said Alcala was “found liable for the misuse of P13.5 million for the construction of the Quezon Corn Trading and Processing Center.”

He was also liable, in a second case, for “illegally allowing the DA to resort to the alternative method of Repeat Order despite the agency’s failure to comply with the requirements under the Government Procurement Reform Act.”

Misuse of funds for construction

In the first case, the Ombudsman cited records showing that the Isa Akong Magsasaka Foundation Incorporated applied for accreditation with the DA on September 27, 2012, to “help the farmers in Quezon.”

The Ombudsman said Alcala certified the foundation as compliant with accreditation requirements on November 5, 2012, then signed a memorandum of agreement (MOA) with Bautista Ella, president of the foundation, on February 11, 2013.

The DA made a fund transfer of P15 million to the foundation so it could establish the Quezon Corn Trading and Processing Center. A certain Laureano Arnulfo Mañalac issued two official receipts acknowledging that the foundation got the money.

But “according to complainant Field Investigation Office (FIO), Alcala authorized the DA to transfer the P13.5 million for the construction of the center on a lot privately owned by Ella which is contrary to the basic principle that public funds shall be used solely for a public purpose,” said the Ombudsman.

“The FIO also uncovered that Mañalac is Alcala’s Head Executive Assistant (HEA) who concealed his interest in the foundation as one of its incorporators and his relationship to Ella, his father-in-law. Mañalac was also the program director of the Agri-Pinoy Trading Center-Project Management Office (APTC-PMO).

“Since Mañalac was an incorporator of the foundation and given his functions as program director of the APTC program, the foundation would have been automatically disqualified from being granted any public funds from the program.”

Ombudsman Conchita Carpio Morales noted that Alcala “had the duty to review APTC project proposals” and he cannot claim that he “merely relied in good faith on the actions of his subordinates.”

The Ombudsman also said Alcala failed to look into the MOA and did not build a case that the DA could have pursued against the foundation.

In the second case, the Ombudsman narrated that former agriculture secretary Bernie Fondevilla awarded a contract for the delivery of 1,500 pump and engine sets for the Shallow Tube Well/Pump Irrigation System Open Source project on April 12, 2010.

Then on September 8, 2010, “Director Silvino Tejada of the Bureau of Soils and Water Management (BSWM) of the DA, wrote Alcala requesting for the procurement of 375 sets of pump and engine at a total cost of P29,231,250.00.”

Alcala issued a purchase order for Tejada’s request on September 22, 2010.

“Alcala’s defense that he had no knowledge of the nature of the previous procurement; that he relied on the recommendation of the BAC (Bids and Awards Committee) and that he acted on the documents in the regular performance of his duties cannot be countenanced,” Morales said.

“Reliance in good faith on the recommendation of subordinates does not justify non-compliance with the law. As head of agency, much is expected of Alcala.”