Oct 2, 2017 6:50 PM PHT
Lian Buan
Facebook Twitter Copy URL
Copied
Carandang issues the statement in the face of threats of cases to be filed against him for breaching confidentiality in investigating the wealth of the President and his family 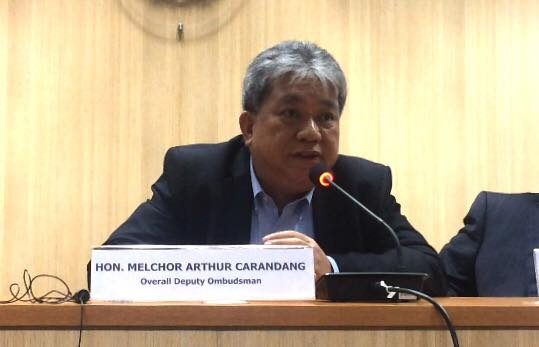 MANILA, Philippines – Overall Deputy Ombudsman Arthur Carandang said on Monday, October 2, that he “observed confidentiality” in the ongoing investigation into the wealth of President Rodrigo Duterte and his family.

In his statement sent to reporters on Monday, Carandang maintained that “a request was made to the Anti Money Laundering Council (AMLC) as part of the investigative process.”

Carandang earlier said that they had received Duterte’s bank transaction records from the AMLC, even as they await a final report from the council which would establish whether there were irregularities in the transactions.

Carandang said that the flow of money in the transactions totaled P1 billion.

Lawyers associated with the Volunteers Against Crime and Corruption (VACC) Manuelito Luna and Eligio Mallari have expressed intent to file a graft and betrayal of public trust complaint against Carandang for “breach of confidentiality.” The lawyers also accused Carandang of “indulging in misinformation.”

The AMLC released a statement denying that they had given a report to the Office of the Ombudsman.

In an earlier statement, Ombudsman Conchita Carpio Morales supported Carandang and said: “As to the documents in our possession, we stand by our word.” Morales said they will not be intimidated.

Carandang said he “was reading through the documents shown to him by the media during the ambush interview, in response to media’s inquiry on the status of the complaint after more than a year since its filing and in stating that a request was made to AMLC as part of the investigative process.”

Carandang heads the investigation which rooted from the complaint of Senator Antonio Trillanes IV in May 2016 alleging there is P2.4 billion worth of deposits in Duterte’s account which could have possibly been sourced from ghost employees in Davao City.

Morales has inhibited from all Duterte-related cases.

Duterte said he will not recognize the Ombudsman’s jurisdiction in this case and issued a counter-threat to investigate Morales and her office for corruption.

Duterte challenged Morales to resign with him and let the Armed Forces of The Philippines (AFP) take over investigations.

(I will not submit jurisdiction because it’s a lousy thing. Imagine this, Carandang, pray, Carandang. I’m not threatening you. If the Philippines goes to mess, you will be first.)

Duterte said his wealth would not go beyond P40 million and that he would immediately resign if somebody could prove that it went as less as P200 million. – Rappler.com