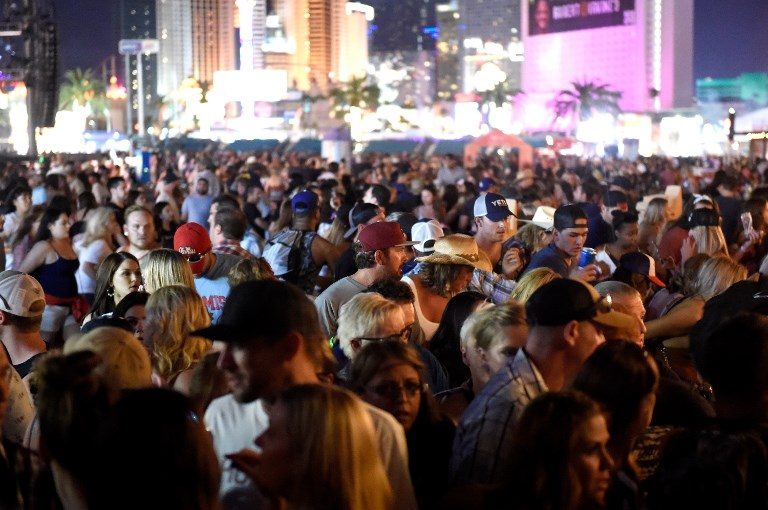 Facebook Twitter Copy URL
Copied
'We are coordinating with Las Vegas police authorities and with leaders of the Filipino community to check on our kababayans there,' says the Consul General

MANILA, Philippines – The Philippines’ Department of Foreign Affairs (DFA) said it is checking whether any Filipinos were among the victims of the deadly shooting in Las Vegas that killed at least 50 people.

On Sunday, October 1, a gunman identified as Stephen Paddock opened fire on a country music concert, killing at least 50 people and injuring more than 200 others.

“We are coordinating with Las Vegas police authorities and with leaders of the Filipino community to check on our kababayans (countrymen) there,” Consul General Adelio Angelito Cruz said.

“We hope and pray that all of them are safe and accounted for,” Cruz added.

The DFA also expressed condolences to the families of the victims of the deadliest mass shooting in modern US history.

“We offer our deepest sympathies to the United States over this disturbing act of violence that took the lives of 50 people in Las Vegas last night,” Cayetano said.

“We mourn with the families of those who perished and hope for the speedy recovery of the more than 400 people who were reported injured…Our thoughts and prayers are with the American people today,” he added.

Las Vegas police said they have located the shooter’s “companion,” a woman named Marilou Danley, who they called a “person of interest” in the case. No further details have been given on Danley as of posting. – Rappler.com