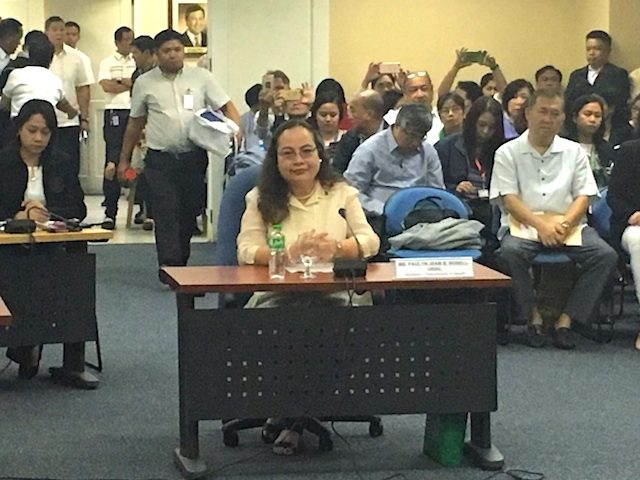 MANILA, Philippines – Senator Vicente Sotto III grilled Health Secretary Paulyn Ubial on the necessity of the 15 foreign trips that she took in the past year, when the Cabinet official faced her second confirmation hearing on Tuesday, October 3.

“Naturally, as head of the department, the secretary of health is invited to a lot of conferences abroad. However, I am a bit concerned about the numerous reports that reached our office that describe the secretary’s travels as being too numerous or too often for the length of time that she has occupied her post,” said Sotto.

“For example, 6 foreign trips in two and a half months. Some are saying these are wasteful for government funds because of the number of people accompanying the secretary on her travels,” he added.

Ubial said she actually took 15 trips abroad already, 3 of which were ordered and funded by the Office of the President. Most of her travels involved international conferences like the World Health Assembly of the World Health Organization (WHO) and the 7th Asia-Pacific Economic Cooperation (APEC) High-Level Meeting on Health and the Economy  in Vietnam.

The Philippines is a member-state of the WHO and APEC.

Twelve of Ubial’s trips are as follows:

“And I would like to categorically state that the difference between me and my predecessor is that I travel economy and I stay in budget hotels as that is the directive of the President to all his Cabinet members,” Ubial told the CA members.

Sotto then told Ubial that he received reports that 15 Department of Health (DOH) officials joined her entourage in her trip to Cuba last year. He even showed pictures of Ubial joined by several people during the said trip.

Ubial clarified that only 10 officials duly approved by the DOH travel and selection committee traveled with her.

“Those are pictures of the interpreters, the guide in Cuba, and the Philippine mission in Mexico sent two representatives. In the picture are 4 Filipino students who are studying medicine in Cuba,” she said.

“Any of the travels that I do is within the bounds of the previous and current, shall we say, allowed by law. And it is recommended by our travel and selection committee who will join the secretary and if there is availability of funds for such officials to join [the trip],” said Ubial.

Of all the CA members present, only Sotto was able to ask Ubial substantial questions because of lack of time. The CA suspended voting on Ubial’s confirmation until next week.

WHO has ‘vested interest’ on Ubial’s trips?

During the hearing, Sotto took issue with the WHO funding some of Ubial’s international travels.

He told the DOH secretary that the WHO “advocates use of condoms not just for adults but also for actively promoting the distribution of these condoms among teenagers and the youth.”

For Sotto, the WHO has “vested interests” in funding Ubial’s trips, supposedly to promote condom use among Filipino youth.

“The WHO definitely has vested interests in funding the travels of the secretary….Of course, they’re getting into your good graces. I’m sure that is why they want you to promote condom use among the youth,” said Sotto.

He then asked Ubial if WHO’s funding of her trips can be considered as a gift. Ubial explained the WHO does not focus on reproductive health and family planning alone.

The senator had earlier hit Ubial for her proposal to distribute condoms in schools, which did not push though as Education Secretary Leonor Briones was opposed to it.

Ubial also told the CA that she will not pursue her plan to distribute condoms to students.

Ubial was also questioned about relatives tagging along during her international trips. She clarified that they shouldered their own expenses and that she does not sacrifice her duties just to spend time with them during the trip.

Senator Manny Pacquiao asked Ubial if she had a son named Karl and whether or not he supported her work. The DOH chief confirmed this and said he supported her. Pacquiao said he would ask the rest of his questions involving Karl in the next hearing.

In an ambush interview with reporters, Ubial said Karl has joined her official trips. He is a 22-year-old freshman at the University of Santo Tomas College of Medicine.

“Yes, my son traveled with me but I paid for it,” Ubial said, adding that her son briefly served as a consultant for her between June and July.

“He signed a contract, P1 as consultant. He’s without pay but he has a contract. June and July he was with me when I was already proclaimed by the President as health secretary,” said Ubial. – Rappler.com