Marawi general is next Army chief 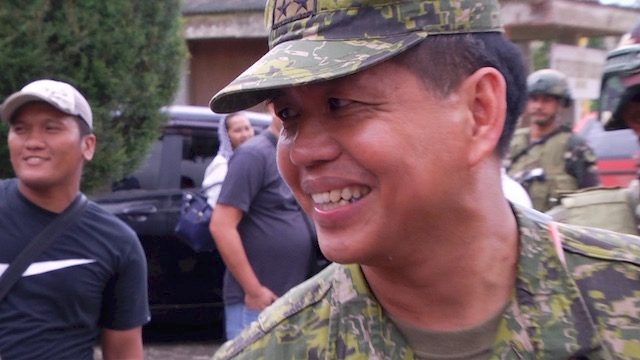 Facebook Twitter Copy URL
Copied
It's a fast rise for Major General Rolando Bautista under President Rodrigo Duterte. He is the overall commander of military operations in Marawi, where troops are fighting local terror groups linked with ISIS.

MANILA, Philippines – The overall ground commander in Marawi City, Major General Rolando Joselito Bautista, will be the next commanding general of the 90,000-strong Philippine Army.

“Yes, siya na nga (it’s him). He is still in Marawi leading our troops but he has to come to Manila before the change of command ceremony,” Año told Rappler.

Año was all praises for Bautista, a member of the Philippine Military Academy (PMA) Class of 1985.

“He is a silent worker, achiever and very qualified having passed the career ladder of a professional Army combat officer. He has directly led our troops against the Maute-ISIS group in Marawi City since Day 1,” Año said.

“It’s a tough decision for the President because all the contenders are really good and able military leaders of the Philippine Army,” Año added.

It was a fast rise for Bautista under President Rodrigo Duterte. He was Duterte’s first Presidential Security Group (PSG) chief. He got his post as 1st ID chief 10 months later and now the Army chief post another after 7 months.

The war in Marawi

His promotion comes as the military is pushing to end the war that has dragged on for over 4 months.

The military reported up to 951 people have been killed in the war, including 155 government forces, 749 enemies, and 47 civilians.

Up to 1,600 soldiers were reported wounded in the war although the military said more than half of them have returned to the battle area.

It’s one of the longest, biggest, and bloodiest military operation in recent history. The urban terrain proved difficult for troops used to jungle warfare.  (WATCH: The final push: Inside the Marawi battle area)

The Philippine Army comprises the bulk of the 120,000-strong AFP.

Bautista is expected to continue to focus on threats from local terror groups linked with ISIS. Government troops are fighting two groups in Marawi City – the Maute Group and the Abu Sayyaf Group faction of Isnilon Hapilon – but more armed factions in other provinces have pledged allegiance to the international terrorist network. (READ: Terror in Mindanao: The Mautes of Marawi)

Before becoming PSG chief, Bautista was commander of Joint Task Group Basilan and has been hunting down Hapilon, the purported emir of ISIS in Southeast Asia.

The Philippine Army is also fighting a 5-decade-old communist insurgency as the formerly promising peace talks with the Duterte administration faces stumbling blocks.

Peace with the dominant Muslim rebel group Moro Islamic Liberation Front continues to hold as the government promises to enact the Bangsamoro Basic Law (BBL) that will establish a new a region that will replace the Autonomous Region in Muslim Mindanao.  – Rappler.com