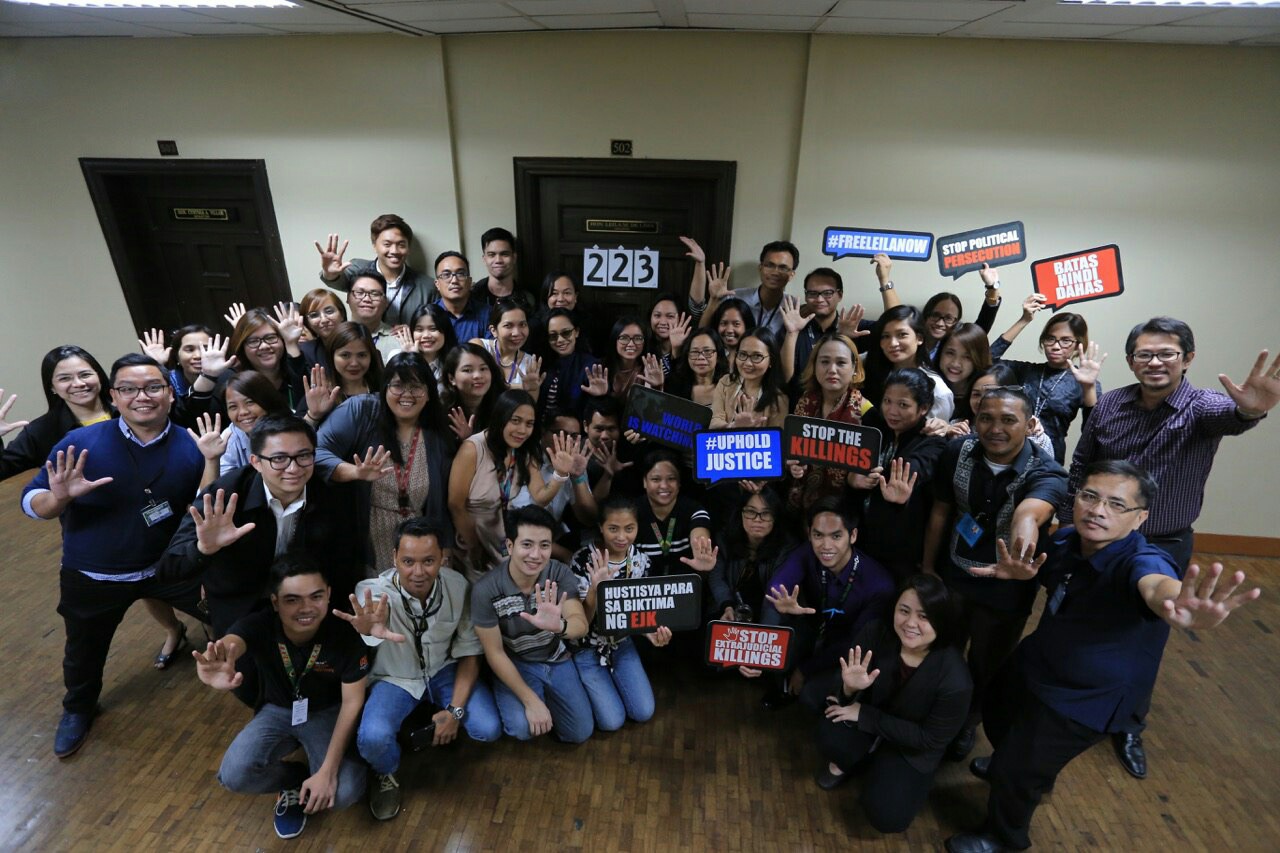 MANILA, Philippines – The members of detained Senator Leila de Lima’s staff want an “immediate public apology” from two pro-administration bloggers after they posted a “taunting” photo in front of the senator’s office.

Lopez posted a photo of him and Nieto taken outside De Lima’s office, seemingly rejoicing over her detention in Camp Crame for drug charges. The two were at the Senate for an interview with administration Senator Richard Gordon.

“We take serious offense at the discourteous behavior of individuals by the name of Rey Joseph ‘RJ’ Nieto and Mike Acebedo Lopez when they posed taunting photos to ridicule Senator Leila M. de Lima right in front of our office as they visited the Senate for an interview last October 3,” Maglalang said.

Nieto, who is behind the Thinking Pinoy blog, is head of the Strategic Communications Unit under the Department of Foreign Affairs (DFA) Office of the Undersecretary for Migrant Workers Affairs. Lopez is a known pro-administration personality.

“Their misconduct aimed at mocking a sitting, albeit detained Senator, and her staff, is unacceptable and contemptuous, and should never be tolerated… Posting photos to mock Senator De Lima and her staff would not earn you legitimacy but only speaks of the crudeness of your character,” Maglalang said.

During Wednesday’s hearing on fake news, minority senators slammed the two for their behavior against a fellow sitting senator.

Senator Antonio Trillanes IV asked Nieto for an apology but the latter insisted he would not do so.

“I’m entitled to my own political opinion,” he added.

Trillanes then quipped: “You’re entitled to your own sick opinion.”

“What bloggers like Mr Nieto did is a demonstration that they want the stature of mainstream media without similar limitations,” Hontiveros said.

“I’m very disturbed madame chair, that a resource person invited by the Senate has disrespected a member of the Senate and right at her place of work to pose such poses and then to post such posts and share them, gloating over the continuing misfortune of a person,” she added.

In a separate post, Lopez stood by the photo and said they did not “wish anyone ill” there.

“We did not burn effigies, raise our middle fingers, spew profanities, and wish anyone ill in that post. All we did was flash our pearly whites and pose spontaneously in front of a door that was begging for photos. The caption was even unusually benign,” he said.

Nieto, accused of propagating falsehood and disinformation online, claimed he was just exercising his right to freedom of expression. Even if he works as a consultant of the DFA, Nieto said he is not considered a government employee.

He claimed that his job only kicks in when he gives “advice” to DFA Undersecretary on Migrant Workers’ Affairs Sarah Lou Arriola, a close aide of Duterte’s former running mate and now DFA Secretary Alan Peter Cayetano. (READ: ‘DFA needs me more than I need them’ – Thinking Pinoy)

“So as to the question whether I should be nicer to people on my personal blog, I do not think so. So instead of blaming me for what I say, maybe people should start to listen, because after all, [there’s] democracy,” he said. (READ: NUJP hits Thinking Pinoy blogger RJ Nieto as ‘barefaced liar’) – Rappler.com