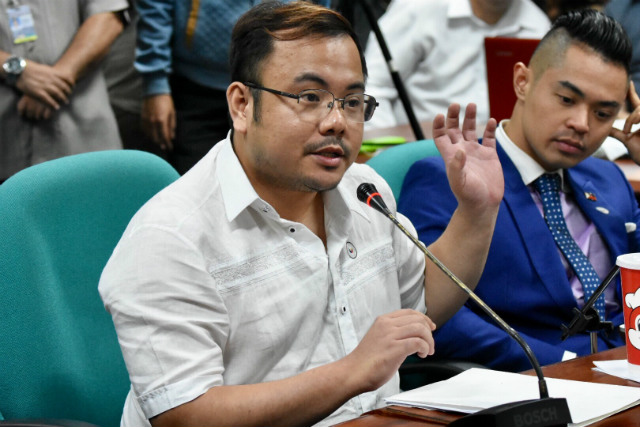 MANILA, Philippines (3rd UPDATE) – Blogger Rey Joseph Nieto, also known as Thinking Pinoy, did not disclose in a Senate hearing that he won a government consultancy deal on top of his job at the Department of Foreign Affairs (DFA).

Based on a document downloaded by Rappler from a government website, Nieto clinched a P30,000 ($587) consultancy contract with the Bases Conversion and Development Authority (BCDA) on August 17.

The notice of award, signed by BCDA executive vice president Aileen An Zosa, stated that this P30,000 consultancy contract covers a period of at least 6 months at the BCDA.

“We are pleased to inform you that the contract for consulting services as an individual consultant under the Office of the President and Chief Executive Officer (PCEO) of BCDA, where trust and confidence are the primary consideration, is hereby awarded to you at a contract price equivalent to Pesos: Thirty Thousand and 00/100 (P30,000), net of all applicable taxes, for a period of 6 months, renewable at the option of the PCEO, but in no case shall exceed his term,” Zosa told Nieto.

In a statement, the BCDA said that they wanted to engage Nieto’s services “because of his huge following and tremendous reach on social media.”

“However, Mr Nieto informed us that he was no longer interested to be engaged by BCDA, thus no Notice to Proceed was given, and Mr Nieto did not receive any compensation from BCDA,” the BCDA added.

Read Nieto’s notice of award from the BCDA below:

A screenshot of this BCDA document went viral on social media earlier on Thursday. Rappler downloaded this document from the BCDA website soon after getting a tip about this.

Minutes after it went viral, the notice of award for Nieto can no longer be accessed on the BCDA website.

A cached version of the page, however, is stored online.

Rappler accessed this cached version, and found that the status of the Nieto contract remains “awarded.” 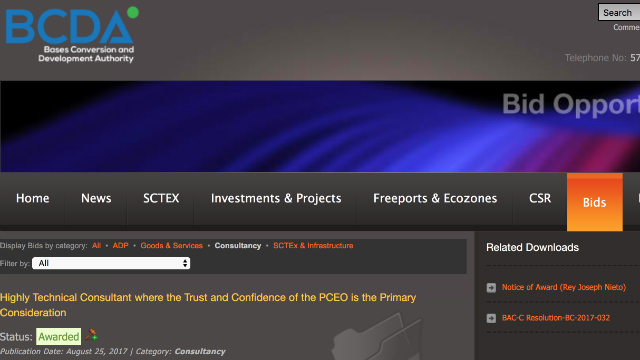 The page comes with two previously downloadable documents, which also can no longer be accessed except through the cached version:

The notice of award for Nieto also contains a signature that reads “Rey Joseph P. Nieto,” to indicate his “concurrence.”

At the Senate hearing on Wednesday, October 4, Nieto only said he is a consultant with DFA, earning an amount of P12,000 ($235), which, he said, is not even enough to pay for his taxi rides. (READ: ‘DFA needs me more than I need them’ – Thinking Pinoy)

Nieto made this disclosure after Senator Francis Pangilinan asked him, “Are you being compensated now by government?”

“I am a consultant for the Department of Foreign Affairs,” Nieto answered. He made no mention of the BCDA.

Nieto made these statements under oath.

At the DFA, Nieto works as “head of strategic communications” for the DFA Office of the Undersecretary for Migrant Workers’ Affairs (OUMWA).

OUMWA is now headed by Undersecretary Sarah Lou Arriola, who served as the chief of staff of then-Senator Alan Peter Cayetano.

Nieto’s direct superior at the BCDA is Vivencio Dizon, the agency’s president and CEO. Like Nieto’s boss at the DFA, Dizon used to work for Cayetano as his consultant at the Senate.

The Cayetano connection links Nieto’s bosses at the DFA and the BCDA.

Here is the partial transcript of Nieto and Pangilinan’s exchange at the Senate, where Nieto was speaking under oath:

SENATOR PANGILINAN: Are you being compensated now by government?

REY JOSEPH NIETO: Right now I work for the – I am a consultant for the Department of Foreign Affairs. I am the head of strategic communications, content, of the office of the undersecretary for migrant workers’ affairs. Initially i wanted to work there pro bono because I don’t want to get hit just like how Mocha got hit when somebody said she earns like P100,000 a month.

SENATOR PANGILINAN: How much are you receiving?

SENATOR PANGILINAN: So you are now a consultant?