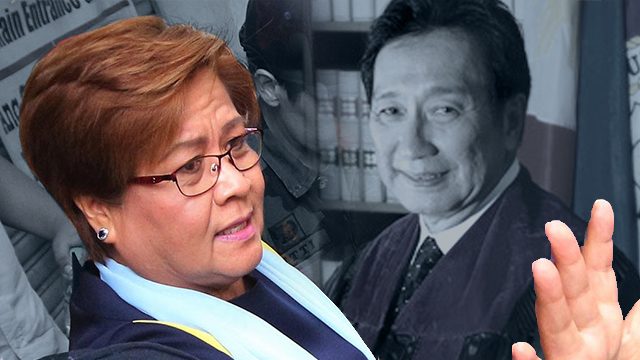 De Lima submitted her motion for inhibition to the SC en banc on Thursday, October 5.

The SC is set to vote on De Lima’s motions questioning the jurisdiction of the Department of Justice (DOJ), and consequently the Muntinlupa Regional Trial Court (RTC), over the drug charges against her. If the SC rules in her favor, it would give De Lima temporary liberty.

De Lima alleged that Velasco is “unfit to decide the case” because of links to convict German Agojo. Agojo is among the inmates who submitted an affidavit, claiming that he was ordered to sell drugs to fund De Lima’s 2016 senatorial campaign.

Citing the investigative report of Rappler editor-at-large Marites Vitug in her book Shadow of Doubt, De Lima said Velasco once pushed for the acquittal of Agojo at the High Court.

Agojo was convicted of drug charges by a Batangas court in 1999, and the ruling was affirmed by the Court of Appeals (CA) in 2007. When it reached the SC, the justices voted unanimously to uphold the conviction.

Vitug wrote in her book, however, that “Velasco disagreed and pushed for the acquittal of the drug lord.” Retired SC justice Arturo Brion supposedly clashed with Velasco’s dissent on the case.

De Lima further cited Vitug’s book in saying that Velasco was suspected by Brion of leaking information to Agojo.

De Lima said that when she was DOJ secretary, she even ordered an investigation into the death threat against Brion which supposedly came from Agojo due to Velasco’s leak.

“German Agojo, the drug lord that Justice Velasco moved to be acquitted, figures prominently not only as an integral witness for the prosecution but also as a complainant against herein petitioner in several criminal and administrative cases,” De Lima’s motion said.

In a statement to media, Velasco “vehemently denied” that he ever pushed for Agojo’s acquittal.

“Justice Velasco does not know nor has he met Mr Agojo and has no relationship whatsoever with the alleged drug lord,” reads the statement.

Velasco also said he sued Vitug for libel over the report but later withdrew the case “out of compassion.”

On September 9, 2017, Agojo submitted a sworn affidavit accusing De Lima of orchestrating the drug trade inside the national penitentiary:

(I remember in January 2014, our group was called to a meeting and we were instructed to sell drugs…Our group needed to collect P20 million within 3 months, to support Secretary Leila de Lima’s 2016 senatorial bid. Non-cooperation meant corresponding penalties.)

De Lima recalled that she was sued in 2014 by Agojo for ordering his and 18 other inmates’ transfer from Bilibid to the National Bureau of Investigation (NBI).

Agojo’s lawyer Ferdinand Topacio filed administrative cases against De Lima over the same issue, the senator said. Agojo’s son Renz also filed a petition of amparo “for alleged violation of the rights of his father due to the transfer to NBI.”

“The inordinate link and actuations of Justice Velasco with regard to German Agojo will significantly taint the credibility of the impending decision of the Supreme Court if he is to participate in the deliberations of the instant case and permitted to signify his position accordingly,” De Lima said.

De Lima cited Rule 137 Section 1 of the Rules of Court as basis for Velasco to inhibit. She also cited an SC ruling which says “a judge has both the duty of rendering a just decision and the duty of doing it in a manner completely free from suspicion as to its fairness and as to his integrity.” – Rappler.com