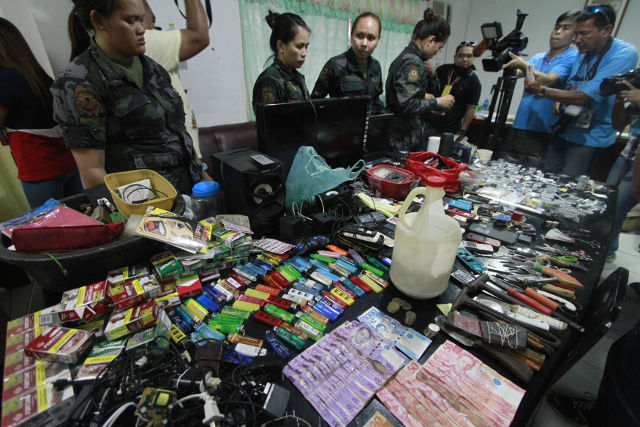 The Greyhound Operation was conducted by elements of the Provincial Public Safety Company (PPSC) of the Cebu City Police Office (CPPO) and the Special Weapons and Tactics as part of continuous efforts to rid the provincial jail of drugs and other contrabands, said PPSC head Mario Baquiran.

The CPDRC is home to the world-famous dancing inmates. At past 6 am on Thursday, however, the inmates, including the dancers, were stripped half-naked and gathered at the jail ground while operatives searched 15 cells occupied by high-value drug personalities.

At noon, an initial inventory showed that several small packs of a substance believed to be shabu, valued at least P71,000, 5 tablets of valium, improvised weapons, drug paraphernalia, and several mobile phones and gadgets were seized during the Greyhound Operation.

The cell of alleged Cebu drug lord Alvaro Alvaro, alias Baruk, yielded a flat-screen television but no drugs were found. The inventory was still ongoing at noon today following a 3-hour search operation.

It was the fifth Greyhound Operation conducted at the CDPRC this year. In May, an operation headed by the Philippine Drug Enforcement Agency (PDEA) 7 became controversial when photos of inmates stripped naked circulated online.

Yogi Filemon Ruiz, who was then PDEA 7 director, said that prior to Operation Greyhound, he had already received information that some inmates possessed bladed weapons. There was also word of drug-injecting inmates who might use their syringes to hurt PDEA operatives.

The test was conducted among the 90 personnel of the CPDRC.

Cebu Governor Hilario Davide III said he will recommend a rehabilitation program for the job order employee, who is under the payroll of the provincial government. – Rappler.com