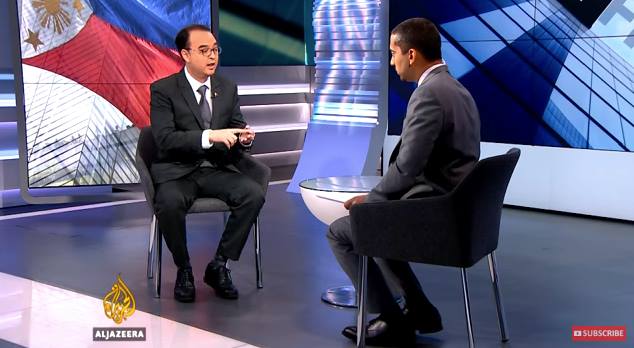 In the interview uploaded on Friday, October 6, Cayetano falsely claimed that all 3,800 Filipinos killed in the Duterte administration’s war on drugs were drug dealers.

Cayetano also said that the Philippine National Police can be “trusted in general,” as he downplays President Rodrigo Duterte’s pronouncement in January that the police force is “corrupt to the core.” (READ: 19 cases of drug war deaths filed in court – DOJ)

Here is the transcript of the drug war portion on Al Jazeera’s Upfront:

HASAN: Let’s talk about perhaps the most controversial aspect of your government record in office, at least in the eyes of the international community. President Duterte’s so-called drug war – between 3 to 4, 5, 6, 7 thousand dead depending on which figures, which study to look at, including many innocent children.

Senior police officers admitting to executing suspects, planting evidence at crime scenes. Is it any wonder that the Catholic Church in your country has described your government’s drug war as a “reign of terror”?

CAYETANO: Well, if you won’t believe the Filipinos, and won’t believe Philippine surveys, let’s believe American surveys. The Pew, they just came out with a survey that 78% of Filipinos support the crusade against crime, corruption, and drugs; 68% believe that the drug war is actually working. Why? Is it because we believe in human rights violations, we believe in killing people? No. The perception that was thrown to the international community was led by certain human rights groups associated with our opposition and associated with some people in the Catholic Church, but they did not give the international community the correct facts.

HASAN: When you said believe the US, you quote a poll, I’m not disputing that Filipinos support President Duterte and support the… I’m not disputing that. I’m disputing the record. The US Assistant Secretary of State for Southeast Asia says: “We have a very sustained, deep concern that the drug war is operating outside the rule of law. The growing number of extrajudicial killings is troubling, we have raised those concerns.”

The US State Department, the Catholic Church, they’re all just biased against the Philippines?

CAYETANO: Yes, because the point is, Filipinos will not support human rights violations. We’re a very spiritual people, whether Muslim or Christian, Filipinos believe in the dignity of life. If I ask you, how many extrajudicial killings in the Philippines in 2013 or 2012 or 2011, the minimum was 11,500, the maximum was 16,000. Every year, 11,000-16,000 extrajudicial…

HASAN: Let me just speak for the record, you as the foreign minister of this government, your position is that a few years ago on the last government, there were 11,000 deaths. But this year, don’t believe any of the numbers about deaths. Not very convenient, isn’t it?

CAYETANO: No, that’s not…

HASAN: Everyone died in the last government, nobody died under your government. Even the human rights groups, the US State Department, the Catholic Church have all attacked you for your record.

CAYETANO: Not at all the point. The point is…

HASAN: Other people did bad things?

When Duterte came in, they went back to the old definition and anyone murdered or killed was charged against the drug war. But the opposite is happening in the country – you have 13,000 to 16,000 killings because of drugs, not because of the police or the drug war.

HASAN: Hold on, Your own report says 3,800 people have died in anti-drug operations.

CAYETANO: What do you…

HASAN: Killed by who? By police officers who admitted that many of those killings are false killings…

HASAN: Filipino police have not admitted that?

HASAN: Filipino police have not admitted to any false killings?

CAYETANO: No, absolutely. There are a couple…

HASAN: So they have admitted.

CAYETANO: They did not admit, because they’re guilty. No guilty guy would admit. There are a couple of policemen who were caught murdering, and they’re being charged by murder.

HASAN: So every single one of the 3 and a half thousand people who was killed was a drug dealer?

CAYETANO: You’re absolutely saying it as if you’re not on the ground. Come and look. If I pull a gun on you, here, right now, and you shoot me, it’s your fault? Or my fault?

HASAN: That’s not what I asked. I said 3 and a half thousand people have been killed by the police, are they all criminal drug dealers?

HASAN: How do we know that? None of them were tried. Normally, you arrest someone, put them on trial, the Philippines is just killing…

CAYETANO: So you mean in the US or even in any country your show is shown, if someone pulls a gun on the police, they have to bring them to court first before they fire back? The police are doing what they can.

HASAN: Can we trust the Philippine police?

CAYETANO: Last time I checked, hyperbole and figures of speech are allowed.

HASAN: 40% of the police in the Philippines are corrupt, he says, is that true or false?

CAYETANO: That’s his estimation. Their chief of police estimation is 2%.

HASAN: So who’s right, the President or the chief of police? I can’t believe you’re throwing [him] under the bus.

CAYETANO: I’m not throwing him under the bus. What I’m saying…

CAYETANO: When you make an estimation…

HASAN: Is it a correct estimation?

CAYETANO: That is his estimation. That’s not the point. The point is he’s trying to clean up the police, and he admits that there is a problem.

CAYETANO: No, we’re not saying we should trust them, we said we should follow the law which is presumption of regularity, but investigate.

HASAN: How many investigations have there been into the 3 and a half thousand killings?

CAYETANO: 3 and a half thousand. Every single one of them are being investigated.

HASAN: Most independent observers have said there have not been investigations at all of those killings.

CAYETANO: That’s not true. That’s not true. Independent investigators have seen the progress. It is the ideological and the biased human rights groups, they said there are 3,000 cases, they pick out 28 cases, no scientific method of picking out 28, they only interviewed the families of the death of the alleged pushers. They did not interview anyone from the government. So is that fair to you? And then they came out with their findings generalizing the 3,000 from the 28 without interviewing the other side. And then what did their report say? That they believe that possession of drugs should be legalized. So you tell me, is that the kind of group that is there to investigate, or has already made the judgment? For them, any country that does not legalize the possession of drugs, is not handling the drug case properly. We’ve invited them to investigate.

Now let me tell you where the confusion comes in. Western countries use heroin, marijuana, and also cocaine. None of these drugs is associated with violence and paranoia to the users. It’s the drug sellers who fight it out. But methamphetamine hydrochloride has been proven by the WHO, by the UN office of drugs crimes, to have paranoia and violence.

HASAN: But shouldn’t you treat these people, not just shoot them in the head? You’re cutting funding [for] rehabilitation, from $16 million to $15 million in 2018. (READ: Drug rehab to get P2 billion cut under 2018 nat’l budget)

CAYETANO: That’s not true. It’s going into the buildings, and we’re putting up billions worth of drug centers all around…

HASAN: But do you agree it’s better to treat drug addicts than shoot them in the head?

CAYETANO: Yes, but if they have a gun and they’re gonna shoot you…

HASAN: All 3 and a half thousand people had guns?

CAYETANO: Yes. More than that.

HASAN: That’s just not, that’s not…

CAYETANO: Come to the Philippines and see, because you’re talking from space with what you’re saying now.

HASAN: With respect, I’ve quoted the US State Department, Amnesty, Human Rights Watch, and the Philippine Catholic Church, and you’re saying I’m in space? I can only give you those references.