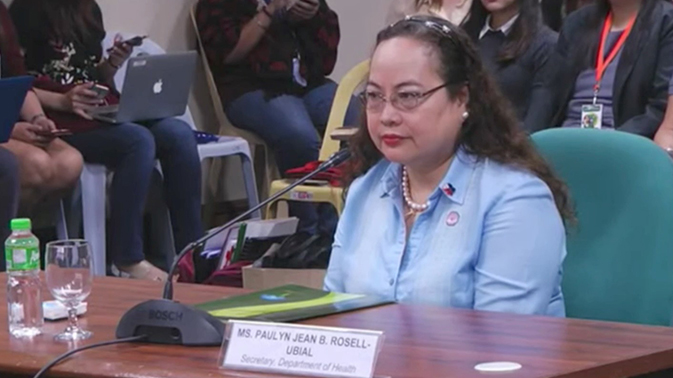 This was announced during the CA plenary session, after the CA health committee recommended to reject Ubial.

Senator Gregorio Honasan II, CA health committee chair, said before the CA plenary that after 3 hearings, the panel reached a “difficult decision” to “withhold its consent to the ad interim appointment” of Ubial.

Ubial did not attend the CA plenary session.

She is among 150 PhilHealth employees who signed a manifesto against Ubial’s appointment.

According to Francisco, Ubial and the PhilHealth board suspended allowances and salary adjusements of all employees, which “resulted in extreme demoralization and has in turn, affected corporate output.”

But Ubial said she had no choice but to follow the notice of disallowance issued by the Commission on Audit.

“It pains the board and it pains the chairman of the board to remove the compensation and allowances of all PhilHealth employees, but we have to follow the law, your honor,” she said.

Former PhilHealth president and chief executive officer (CEO) Hildegardes Dineros also manifested before the CA that Ubial was allegedly “peddling lies” when she claimed he voluntarily resigned from his post in PhilHealth.

“Secretary Ubial repeatedly claimed that I was not ousted but in fact resigned as PhilHealth president and CEO. She lied. I was ousted upon the instigation by the chairman of the board, Secretary Ubial,” said Dineros.

Occidental Mindoro Representative Josephine Ramirez-Sato then grilled Ubial over the PhilHealth board’s multiple appointments for their interim president and CEO without making a recommendation to President Rodrigo Duterte.

Only the President can finalize the appointment of PhilHealth’s president and CEO, the lawmaker said.

Ubial explained the PhilHealth board had already recommended the appointment of Dr Celestina de la Serna for the position in April, but Duterte is yet to offiically appoint her.

The DOH secretary reasoned they did not recommend to Duterte their past appointees because the Philhealth board “resolved there was lack of trust and confidence.”

Sato, however, did not accept this explanation.

“I don’t think you are getting my point very well. Why do you appoint an OIC (officer-in-charge) who you think and you say does not have [your] full trust and confidence? An OIC president should have all the qualifications of a regular president,” said Sato, a lawyer.

“You cannot abrogate it upon yourself to appoint successive OIC presidents because that is the diminution and a disrespect of the power of the President!” she added.

Sato also pointed out that PhilHealth is operating on a net loss.

“You are registering a positive income because you included the P13 billion contributions from senior citizens, which has not been collected for several years now,” said Sato.

Ubial defended the inclusion of the uncollected senior citizens’ contributions in the income statement of PhilHealth.

Sato, however, said this should not be the case.

“Is it right to include this in your statement of income? Because if you deduct this, you’re operating on a loss….You are dipping your fingers into the reserve, which should not be done,” said Sato.

She told Ubial she was asking the questions because PhilHealth will play a crucial role once the universal healthcare bill is passed into law. Under the mesaure, PhilHealth will be the “national purchaser of health services.”

He called out Ubial’s son Karl for criticizing his comment on the hero’s burial for the late dictator Ferdinand Marcos.

Karl had shared a GMA News Online article with the headline “Pacquiao says no one but God can judge ex-Pre Marcos.”

His caption on his post read: “’Only God can judge Marcos.’ Supports judgment through death penalty,” an apparent dig at Pacquiao.

Pacquiao also flashed one of Karl’s tweet, where he brought up the plagiarizism scandal faced by Senator Vicente Sotto III. Karl tweeted: “Well, yeah. Coming from the Senate expert on speech-reading from other people and claiming it as his.”

For Pacquiao, it is wrong for the child of a Cabinet appointee to call out another government official.

(Maybe you should tell Karl that it is not okay that you’re doing your job in the DOH and yet he’s commenting negatively on other leaders of the country, especialy those allied to the administration. That’s not good.)

Ubial said she had already spoken to her son, who is willing to make a public apology.

Roque, meanwhile, slammed Ubial for her “flip-flopping” statements on the Zika virus and the delay in the procurement of the dengue vaccine in favor of the pneumonia vaccine.

The lawmaker also accused Ubial, as PhilHealth chairperson, of controlling internal affairs for her own benefit.

He also complained about Ubial’s “excessive foreign travels” in her first few months in office, the subject of Sotto’s interpellation of Ubial last week. The Cabinet official’s son, Karl, had joined some of her official trips abroad, but Ubial said they personally shouldered the expenses.

Mendoza accused Ubial of planning to fire 7,000 nurses and of meddling when several DOH officials from Tawi-Tawi were caught smuggling and eating turtle eggs.

Malvar, for his part, alleged that Ubial was pulling strings to lift the cease and desist order issued against Diliman Doctors Hospital Incorporated along Commonwealth Avenue in Quezon City, the same area of the hospital he manages.

Ubial had denied all her oppositors’ allegations, even daring Roque to file the appropriate cases against her.

Ubial was seen wiping tears at the end of the confirmation hearing. She said in an interview with reporters after the hearing that he would “accept” the CA’s decision as it was part of a constitutional process.

The Duterte administration holds the record, so far, for most number of presidential appointees rejected by the CA.

Prior to the Duterte administration, there were only two other presidential appointees rejected by the CA – former finance secretary Ramon del Rosario Jr who served the administration of Fidel Ramos, and Ricardo Saludo, Civil Service Commission chairman of the Arroyo administration – Rappler.com