Oct 10, 2017 11:17 AM PHT
Paterno Esmaquel II
Facebook Twitter Copy URL
Copied
(UPDATED) The former head of the Philippine Jesuits, Father Romeo Intengan, is 'dead on arrival' at the Quirino Hospital a week before his birthday 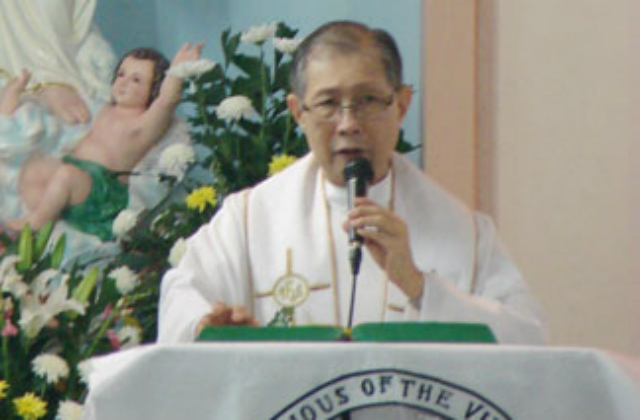 Father Antonio Moreno, head of the Society of Jesus, better known as the Jesuits, confirmed this in a text message to Rappler on Tuesday.

Moreno said Intengan was “DOA,” or dead on arrival, “when he arrived at Quirino Hospital at 6:30 am” on Tuesday.

“May he rest in peace,” Moreno said.

Intengan died 8 days before his 75th birthday on October 18.

In a memo, the Office of the Jesuit Provincial said that Intengan “died quite suddenly” on Tuesday morning, after he “suffered cardiac arrest while being brought to the hospital.”

Intengan’s wake begins on Tuesday evening at the Oratory of Saint Ignatius of the Loyola House of Studies in the Ateneo de Manila University.

Daily wake Masses will be held at 8 pm, until he is buried on Saturday, October 14.

The funeral Mass is tentatively set at 8 am on Saturday in the Oratory of Saint Ignatius. The schedule, however, “may need to be adjusted pending the arrival of the family from the US.”

Intengan will be buried at the Sacred Heart Novitiate Jesuit Cemetery in Novaliches, Quezon City, after his funeral Mass.

A priest for 40 years, Intengan was also a doctor of medicine, having finished this course at the University of the Philippines College of Medicine in 1965.

He also studied theology at the Comillas Pontifical University in Madrid.

He would later on specialize in Christian social ethics, as well as medical and sexual ethics.

Then, from 1998 to 2004, Intengan served as head of the Philippine Jesuits, the religious order that runs the Ateneo network of schools in the Philippines.

In the national scene, Intengan became prominent because of the Marcos dictatorship.

With Norberto Gonzales, Intengan co-founded the Philippine Democratic Socialist Party (PDSP) in 1973, according to the Philippine Center for Investigative Journalism (PCIJ).

Both Intengan and Gonzales “would be thrown in jail in 1978 for leading a march protesting the fraudulent elections held in April that year,” the PCIJ said.

Two years later, Intengan had to flee the country.

“Using false papers, Father Intengan had left the Philippines in 1980 shortly after then-president Marcos accused him of masterminding, for the PDSP, a wave of bombings in hotels, supermarkets and other public places,” reported the Union of Catholic Asian News (UCAN).

His profile on the Ateneo de Manila website said that Intengan “was active in the democratic opposition” during the Marcos regime.

Father Silvino Borres Jr, rector of the Loyola House of Studies, remembers Intengan as having an “iconic status” among young Jesuits because he was “a prominent figure in the fight against the dictatorship.”

“On some of his political positions, we Jesuits did not agree very much with him, but you cannot say of him that he did not love his country,” he added.

He pointed, too, that as for other leaders, “their commitment and their passion for their country kind of waned over the years.”

As for Intengan, Borres said, “the same passion and zeal had remained with him to his last dying day.” – Rappler.com