Mariano urges Duterte not to appoint ex-military officer to DAR 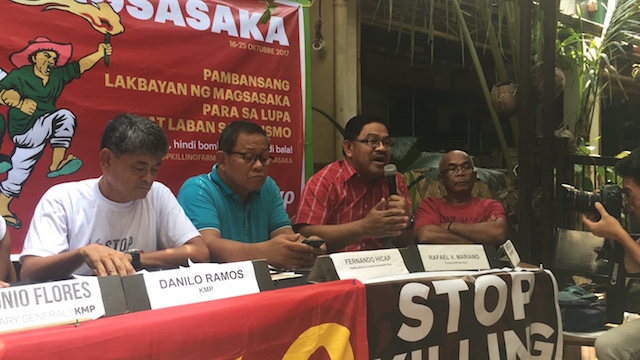 Mariano, who was rejected as agrarian reform secretary by the powerful Commission on Appointments last month,  told Rappler after a media forum held by farm leaders that this was his “unsolicited advice” to the President.

(The next DAR secretary should not be from the military because our farmers fear that the agrarian reform program will be implemented within the framework of the counterinsurgency program and not to solve the fundamental problem of landlessness, and not as an advocate of genuine agrarian reform.)

(What will happen there if there’s a dispute in a landholding? Will the military just come in? It’s still the DAR that should exercise its jurisdiction, and discharge its mandate, powers, and functions.)

The co-chairperson of Makabayan said he understands farmers who worry that the next DAR chief will be a former military officer, since there are already military men in the Cabinet and other government offices.

During the forum, Mariano discussed possible scenarios should Duterte appoint a military officer to DAR. One possibility, he said, is the reversal of “important” DAR administrative orders (AO) he issued during his year-long stint as secretary.

This includes an AO that issued guidelines on landed estates under agrarian reform, and another which gives way to the land acquisition and distribution process, and farmer installation despite applications for conversion involving agricultural lands or pending acquisition proceedings.

(The reversal should not happen. Whatever the DAR accomplished, and whatever our farmers gained should not be reversed. If they appoint someone from the military, the people – not just farmers – will really say that the militarization of civilian bureaucracy is evident.)

Mariano refused to recommend someone for the job he had to vacate in September.