Duterte: China ‘the only monkey wrench’ in North Korea plans 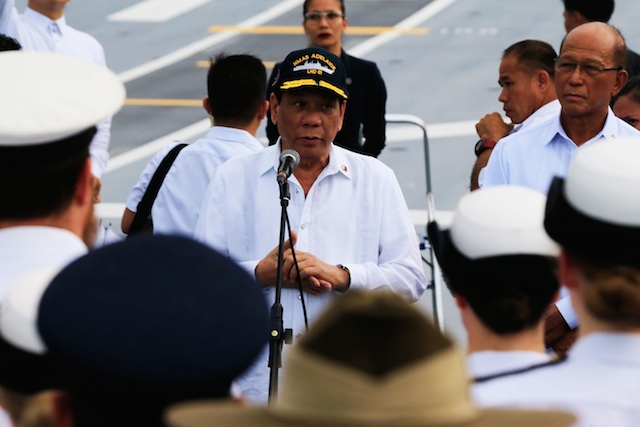 MANILA, Philippines – President Rodrigo Duterte said on Tuesday, October 10, that China is the “only monkey wrench” in the “violent plans” of North Korean leader Kim Jong-un.

In a VIP tour of an Australian ship, Duterte also told Australians to “keep watch” over Kim, whose “goddamn stupid name” he “can’t even pronounce.”

“China appears to be the only monkey wrench in the violent plans of Jung… Kim Un… Un… Un-jung… I can’t even pronounce the goddamn stupid name,” Duterte said aboard Her Majesty’s Australian Ship (HMAS) Adelaide on Tuesday afternoon.

“You have to keep watch over him. And it is always good to be prepared,” Duterte said.

In his speech aboard HMAS Adelaide, Duterte also pointed out that the Philippines is “also suffering from a severe case of terrorism.”

“We’re coping up. We also hope it will be finished in about one week,” Duterte said, referring to the Marawi City clashes that have raged for more than 140 days.

Australia is the Philippines’ number one foreign donor in line with the Marawi crisis, according to a breakdown provided by Defense Secretary Delfin Lorenzana on September 15.

Australia was one of the countries that first earned Duterte’s ire, even during the campaign period. This was after Australian Ambassador to the Philippines Amanda Gorely criticized candidate Duterte’s rape joke in a campaign sortie, involving an Australian missionary who was killed in a hostage-taking crisis in Davao in 1989.

Australia, however, worked to improve ties with the Duterte administration, with Australian Foreign Minister Julie Bishop even paying Duterte a courtesy call, and telling Rappler that the world can learn from Duterte’s victory. – Rappler.com