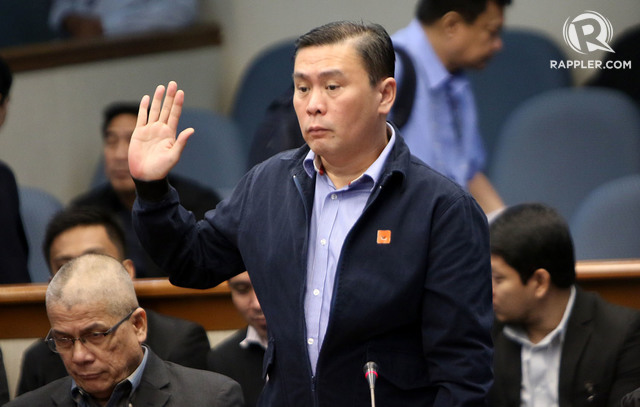 The amount, Taguba earlier said, served as his “enrollment fee” with the so-called Davao Group in exchange for speedy transactions at the Bureau of Customs.

Another option, Gordon said, is for Taguba to file an estafa case against Abellera.

“If, however, bribery is not availing in this situation – as Abellera might say that such act was not in the performance of duty because he is not a Customs officer; Mr Taguba who delivered the enrollment fee to him may just decide to sue him for estafa. This transaction creates the impression that Mr Abellera conducted a sting operation against Taguba, in order to fleece money from this greedy person,” the senator said.

Gordon said Abellera portrayed himself as a Davao Group “operative” by “name-dropping left and right” and called him a sting operator.

“If there is a supposed Davao Group, there might also be a Davao Sting, personified by Mr Abellera,” the draft report said.

In a previous hearing, Abellera admitted he is a close friend of Paolo Duterte. He also corroborated Taguba’s statement that they met at a restaurant in Davao City. Abellera, however, denied receiving the P5 million from Taguba.

“There is no logic for Abellera to meet with a stranger (Taguba) to discuss financial matters, or to plot out schemes in order to further illegal acts, smuggling, if not to conduct a sting,” Gordon said.

After Abellera testified in the Senate, the Davao city council stripped him of a committee chairmanship for supposedly being absent for two weeks.

While the senator recommended charges against the councilor, he has cleared Paolo Duterte and presidential son-in-law Manases Carpio from smuggling allegations. He instead is seeking a lifestyle check on the two.

In the same report, Gordon recommended the filing of criminal charges against former Customs chief Nicanor Faeldon and 4 others over the smuggling of P6.4-billion worth of smuggled shabu.

He also recommended the filing of charges against Taguba, whom he called the “central figure” in the BOC corruption scheme. – Rappler.com