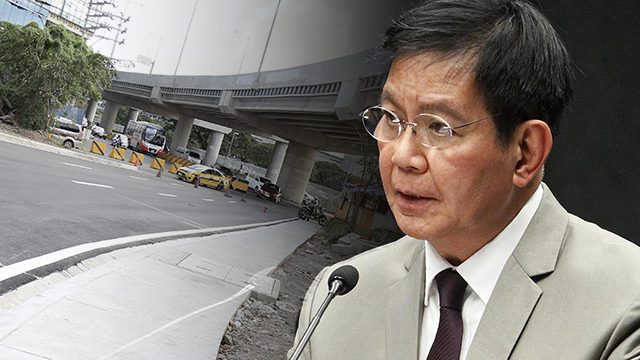 Facebook Twitter Copy URL
Copied
'Clearly the pattern shows that the bloated budget for [right-of-way acquisitions] is the biggest source of insertions and realignments being made by legislators,' says Senator Panfilo Lacson

Lacson said the DPWH has P86 billion for road projects, which includes the ROW acquisitions, and another P51 billion for ROW alone.

The senator said this is the biggest source of insertions by lawmakers, referring to pork barrel or discretionary lump sum funds earlier declared unconstitutional by the Supreme Court.

“Yes, clearly the pattern shows that the bloated budget for ROWs (P86 billion plus another P51 billion) is the biggest source of insertions and realignments being made by legislators. It is also one obvious culprit of the massive underspending committed by the department,” Lacson said in a text message on Tuesday, October 10.

He cited Senator Cynthia Villar’s earlier defense of the underspending in the DPWH, headed by her son, Secretary Mark Villar.

Senator Villar earlier said the DPWH has greater underspending because it seeks allocations for ROWs and construction projects simultaneously. ROWs should be settled first, the senator said, before construction can start.

“As pointed out by Senator Villar, it is nonsense to fund ROWs simultaneously with the road construction itself, since the former should be settled first as in the case of the P86-billion appropriations. Having said that, I intend to cut the P86 billion since the description is road projects including ROW, unlike the P51 billion which is appropriated solely for ROWs,” Lacson said.

He added that if the DPWH was able to identify the P51 billion for ROW acquisitions alone, then it should do the same for the P86 billion.

“Right now, I’m asking my staff to coordinate with the DPWH to identify and itemize the projects that involve ROW. Hindi puwede estimate or hula-hula (We can’t just estimate or make guesses). It’s time we put our foot down on this shenanigan which robs our taxpayers [of] their hard-earned money,” Lacson said.

Lacson earlier hit the DPWH for the alleged overpricing of a 100-meter stretch of national road along Daang Maharlika in Barangay Putlan, Carranglan, Nueva Ecija.

The project received P300 million yearly in 2016 and 2017 and is set to get the same amount next year. (READ: P900M for 100-meter road? Lacson hits DPWH for alleged overpricing)

“While DPWH officials tried to justify the P900-million budget for 3 consecutive years, our ocular inspection of the site tells us that [Secretary Villar] should look more closely and find out if that project is not grossly overpriced,” Lacson said. – Rappler.com