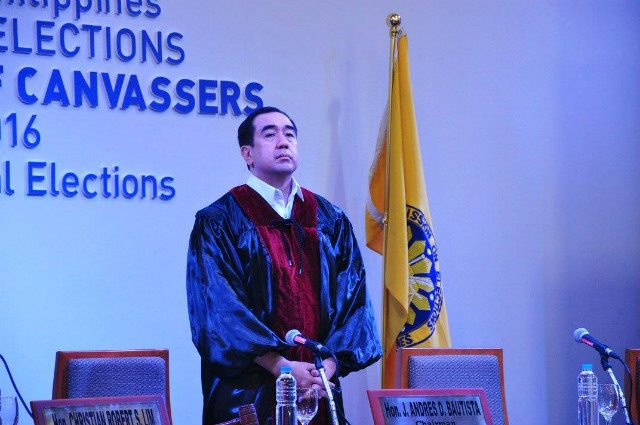 Voting 137-75-2, the House reversed the justice committee resolution junking the complaint against the Comelec chief, hours after announcing his resignation effective by yearend.

Senate President Aquilino Pimentel III said the Senate is “ready” for any impeachment complaint that will be transmitted to them.

He said this would “affect” the chamber’s schedule but they would “find a way.” The Senate is bent on passing the 2018 national budget and the first package of the tax reform bill by December.

Pimentel also said that there is no point in holding an impeachment trial if the respondent is no longer in government, or in the case of Bautista, if he resigns immediately.

“If during the trial, the person is separated from the government, that would be one good reason to terminate [it],” he said.

Senator Francis Pangilinan shared a similar view, saying the issue is “moot” because Bautista is set to step down by end of December.

“Well the penalty for a conviction in an impeachment trial is removal from office. Since he has resigned effective end of the year, I don’t see any reason why the Senate should convene as an impeachment court. It would be a waste of our time. For all intents and purposes the matter is moot,” Pangilinan said in a text message.

Earlier, senators welcomed Bautista’s resignation and said it is the “right” and “decent” move to do, following his personal feud with his wife Patricia over money matters.

But Senator Panfilo Lacson said the impeachment trial would go on because Bautista’s resignation was still not in effect.

“His resignation as announced is prospective so once the impeachment complaint is transmitted to the Senate and his resignation is still not in effect, then we will proceed with the trial,” Lacson said,

Senator Francis Escudero, who is leading the probe into Bautista’s bank accounts, shared the same view.

“He announced his plan or intention to resign but he has not yet actually resigned so impeachment is still an available remedy or procedure,” Escudero said. – Rappler.com