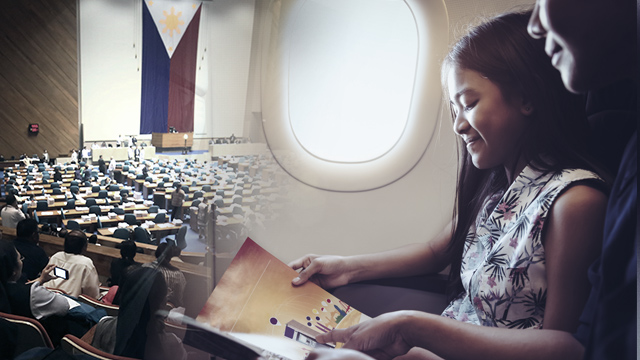 House Bill 6138 seeks to amend provisions in both the Migrant Workers and Overseas Filipino Act of 1995 to exempt dependents of both married and solo OFW parents from having to pay travel taxes. It was approved by the committee chaired by ANGKLA Representative Jesulito Manalo, according to a press release sent Wednesday, October 10.

In its current form, the Migrant Workers and Overseas Filipinos Act of 1995 provides travel tax exemption for OFWs, excluding their dependents.

But House Speaker Pantaleon Alvarez, a principal author of the new bill, said that this is “contrary to the provisions of the Republic Act 6568” or the the Act Instituting a Balikbayan Program which gave exemption to their dependents.

Alvarez added that children of solo OFW parents are not given the travel exemption provided by RA 6568.

“As they have always been acknowledged, the OFWs are Philippine society’s modern-day heroes,” Alvarez said. “This notwithstanding, there is still some void to fill as the so-called solo parent OFWs face some sort of inequity in the field of taxation.”

If passed into law, the bill will amend section 3 of the Migrant Workers Acts to include a definition of ‘solo parents,’ as defined by the Solo Parents’ Welfare Act of 2000, and ‘dependents,’ which will include children of both married and solo OFW parents. Section 35 will also be amended to include migrant workers’ dependents from the travel tax exemption.

Section 35 will be read as follows:

Sec. 35. Exemption from Travel Tax, Documentary Stamp Tax as Airport Fee. – All laws to the contrary notwithstanding, the migrant worker AND HIS OR HER DEPENDENTS shall be exempt from the payment of travel tax and airport fee upon showing of entitlement by the POEA.

“Considering that solo parent OFWs are as equally worthy of government recognition as those of married Filipino migrant workers, this unfortunate circumstance must be remedied,” Alvarez said.

The bill will be referred to the committee on ways and means for approval of tax provisions. – Rappler.com