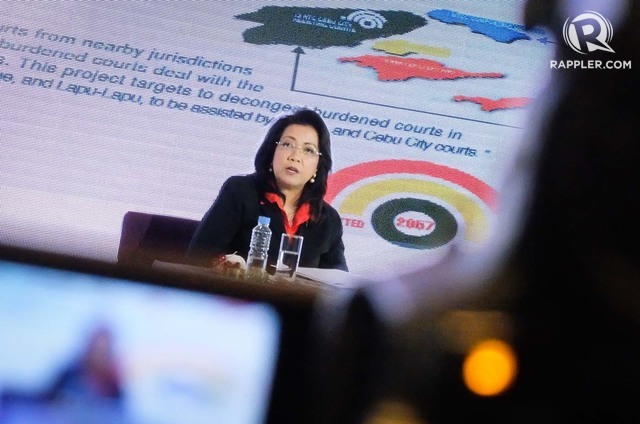 MANILA, Philippines – Another survey showed double-digit drops in the approval and trust ratings of Chief Justice Maria Lourdes Sereno as the House of Representatives continues to assess an impeachment complaint filed against her.

According to the results of a Pulse Asia Research, Incorporated survey released on Friday, October 13, Sereno’s approval rating dropped by 13 percentage points to 35% in June, from 48% in September. 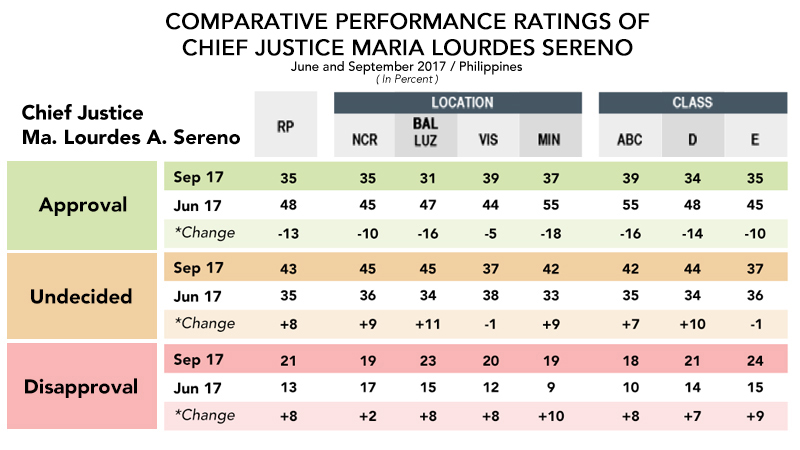 The Chief Justice’s trust rating also fell by 12 percentage points to 31% in September from 43% in June.

Sereno’s disapproval and distrust ratings in September both rose by 8 percentage  points to 21% and 23%, respectively. 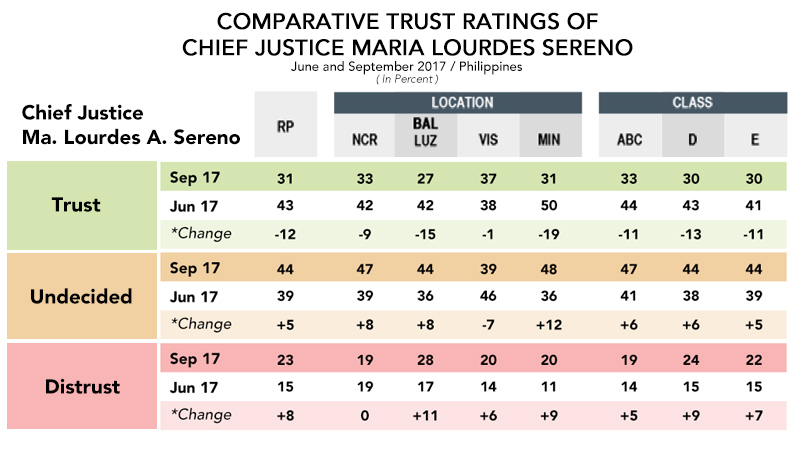 Pulse Asia conducted the survey between September 24 to 30, among 1,200 respondents nationwide. The survey has a ±3% margin of error with 95% confidence level at the national level.

Sereno, observed Pulse Asia, posted “plurality indecision scores” on her trustworthiness in nearly all geographic areas and socio-economic classes. But she recorded the same trust and indecision figures in the Visayas and classes ABC.

Geographically, Sereno had the biggest drop in her approval in Mindanao where she got 37%, a drop of 18 percentage points. Her trust rating in the region fell  by 19 percentage points to 31%.

In Luzon, Sereno’s approval rating decreased to 31% in September from 47% in June, while her trust rating fell to 27% from 42%.

The Chief Justice’s ratings in Metro Manila also decreased. Her approval rating in the capital region fell by 10 percentage points, or to 45% from  35%, while her trust rating for September is at 33% from 42% in June.

In the Visayas, Sereno got an approval rating of 39% from 44% in June. Her trust rating only decreased by one point in September to 37%.

Among the pressing issues during the survey period include the Senate blue ribbon committee’s investigation into the smuggling of P6.4 billion worth of shabu into the country, the replacement of Caloocan City’s police force after the deaths of 3 teenagers, the alleged ill-gotten wealth of President Rodrigo Duterte and his family, and the 45th anniversary of Martial Law.

A day before, the Social Weather Stations released its latest survey showing a 12-point drop in Sereno’s net satisfaction rating. The SWS survey was conducted around the same period of the Pulse Asia survey.

The panel already deemed the complaint sufficient in form, substance, and grounds. It will next vote on whether there is probable cause to pursue the complaint. – Rappler.com