Pimentel open to run with Arroyo in 2019: ‘People change’ 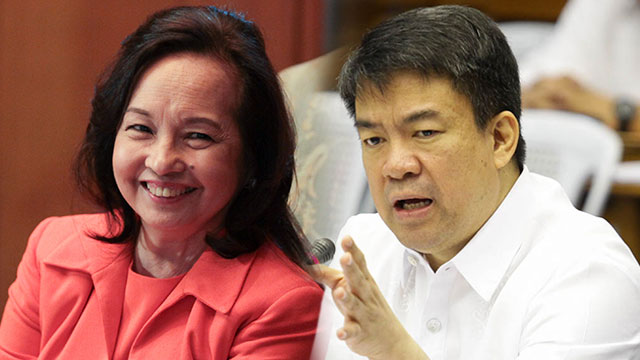 MANILA, Philippines – He once accused her of electoral fraud, but today, Senate President Aquilino Pimentel III said he is open to the possibility of running with former president and now Pampanga Representative Gloria Macapagal-Arroyo under the PDP-Laban senatorial ticket in 2019.

Arroyo, a known ally of President Rodrigo Duterte, recently took her oath as member of the ruling party, headed by Pimentel.

Asked what he thought about Arroyo’s move to PDP-Laban, given their history, and whether there was a chance that Arroyo would be part of the party’s Senate slate in 2019, Pimentel said there were no “awkward” feelings.

“Hindi naman (Not really), because people change and circumstances change, especially in politics. We should not close doors or burn bridges unless absolutely called for or warranted,” Pimentel said in a text message on Friday, October 13.

Pimentel earlier bared his initial list of senatorial candidates for the administration slate, saying he will limit it to party members. At the time, Arroyo had not yet joined PDP-Laban.

Arroyo is on her third term as Pampanga 2nd District Representative, which ends in 2019, giving rise to speculation that she may run for the Senate again. She was a senator from 1992 to 1998.

“If someone wants to help the cause of federalism, then why not accept him her with open arms?” Pimentel said.

“But she must be the one to change by embracing the PDP-Laban’s core principles of belief in God, human dignity, love of country, equal opportunities for all, consultative and participatory democracy, and federalism,” he said in a separate message.

Pimentel said there were no talks yet on Arroyo’s possible return to the Senate but he has, so far, not opposed to it.

“No idea yet. Saka na ‘yan (Let’s reserve it for a later time). Senate slate will be finalized maybe in February 2018 but target date is adjustable. Alam mo naman sa politics (You know in politics), things can change abruptly,” the senator said.

“Party slate will be done objectively. My feelings or opinion should not matter. We will have surveys and analyze data extensively. [It] also depends on their belief in federalism,” the party president said.

Pimentel earlier filed an electoral protest against Senator Juan Miguel Zubiri over allegations of election fraud in the 2007 polls. Zubiri, an ally of Arroyo, was declared the 12th winning senator then. Pimentel replaced Zubiri in 2011 after winning the case.

Pimentel also filed an electoral sabotage case against the former president and her husband, Jose Miguel Arroyo, in 2011, in connection with the 2007 elections.

In 2013, Pimentel left the United Nationalist Alliance slate after Zubiri was also included in the lineup. It sparked the rift between the Pimentels and Vice President Jejomar Binay, who are friends.