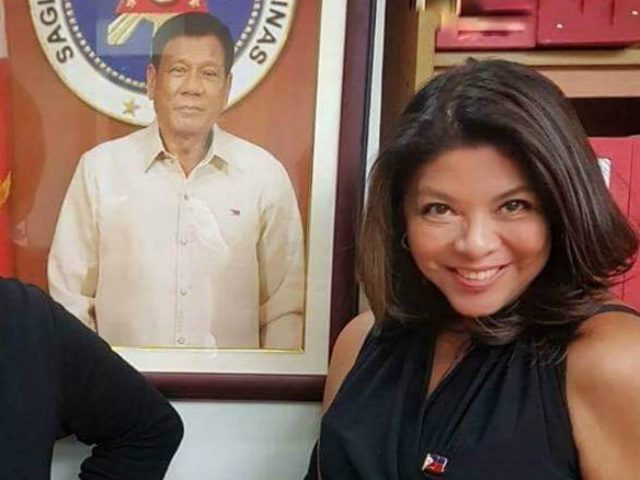 Malacañang released her appointment papers on Monday, October 23, 5 days after the post was reportedly offered to Badoy, who was previously appointed Social Welfare assistant secretary.

Duterte signed her appointment papers on October 19, a day after the offer was made public.

“We look forward to working together as we bring the government closer to the people by keeping them informed of the progress this administration is making towards changing the country for the better,” said Andanar on Monday.

Social Welfare Undersecretary Emmanuel Leyco, officer-in-charge of the Department of Social Welfare and Development (DSWD), said in a text message that Badoy is expected to begin her new job by next month.

“Asec Badoy has informed me as OIC-Secretary at DSWD of this development earlier and is now in the process of completing and turning over her responsibilities which is expected to last until the end of the month,” Leyco said.

“I thank Asec Badoy for her contributions to DSWD and I am confident that she will be able to bring her effectiveness as a communicator to her new assignment as Usec at PCOO,” he added.

Badoy, a rabid supporter of the President, has been criticized for her off-color social media posts seen as inappropriate for someone who is a DSWD official.

In March, she posted unsolicited advice to the European Union (EU) on Facebook that its members should just engage in online pornography instead of criticizing the Duterte administration.

Badoy was also criticized after she ridiculed Jover Laurio – the woman behind Pinoy Ako Blog, a blog critical of the administration – for her physicial appearance.

“If there is anything at all that the unmasking of the hideous creatures behind the poison anonymous blogs teaches us, it is this: YOU GET THE FACE YOU DESERVE,” Badoy said in a Facebook post on October 13.

As PCOO spokesperson, Badoy will be in charge of answering questions from the media about PCOO issues as well as concerns about the office and its attached agencies.

Badoy was offered to be PCOO spokesperson as Andanar repeatedly defended his office from accusations of incompetence following a series of highly publicized mistakes – including the Philippine News Agency’s use of the Dole pineapple company’s logo as the logo of the Department of Labor and Employment (DOLE), and the publishing of PNA articles that included editors’ notes in headlines.

Badoy is the second online personality tapped by the PCOO to be one of its top officials. Controversial blogger Mocha Uson was appointed assistant secretary for social media in May.

The PCOO has depended on bloggers and online personalities to spread its content online and bolster support for it among Duterte supporters, but not without stirring controversy.

For instance, Uson, as PCOO executive, has had to constantly defend herself against accusations of spreading fake news.

She was criticized for several mistakes, beginning with her sharing a photo of Honduran police in a Facebook post about soldiers in Marawi City. Uson defended her post, calling it symbolism.

In August, she drew the ire of netizens after she mistakenly posted a year-old story on a slain cop and used it to hit members of the opposition who attended the wake of 17-year-old Kian Loyd delos Santos. She wondered aloud in her post when the politicians would pay their respects to the slain cop, who died a year ago.

She was also caught performing at a casino despite a Malacañang order prohibiting government officials from visiting such establishments.

Such actions prompted Trillanes to file administrative and criminal complaints against Uson. – with a report from Patty Pasion / Rappler.com