A tale of 2 mothers in the Atio Castillo hazing ‘coverup’

Oct 21, 2017 3:03 PM PHT
Camille Elemia
Facebook Twitter Copy URL
Copied
After the 2nd Senate hearing, senators and authorities are convinced there was intention to conceal the facts surrounding the death of 22-year-old Horacio Castillo III due to hazing 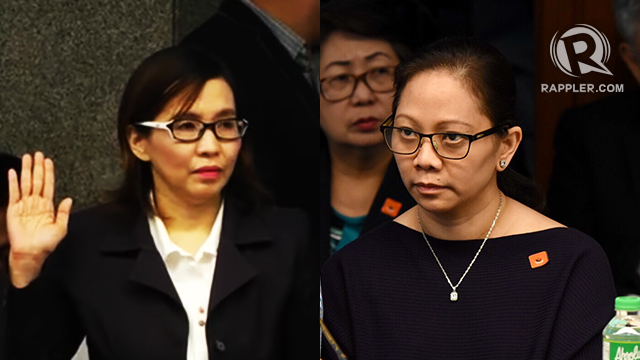 MANILA, Philippines – Two mothers from opposite sides of the story faced each other on Wednesday, October 18, during the second Senate hearing on the fatal hazing of 22-year-old University of Santo Tomas law student Horacio “Atio” Castillo III.

Both were mothers to young would-be lawyers: one intent on protecting her child, while the other forever lost her chance to do that.

Carmina Castillo, together with husband Horacio Jr, attended the probe in search of answers and justice for her son killed by members of the Aegis Juris fraternity. Instead, what she found out was how the organization plotted a coverup for Atio’s death.

Rosemarie and Antonio Trangia, meanwhile, gave no answers and repeatedly invoked their right against self-incrimination, which senators said was an attempt to conceal the truth. Their son Ralph is among the suspects in Castillo’s death.

Rosemarie and Ralph earlier left the country for Chicago. The Department of Justice then placed them on the immigration lookout bulletin. The two returned to the country on October 10.

The mother in search of answers

Members of the Aegis Juris fraternity attended the second Senate hearing after being summoned. It was the first time for the Castillo couple to face the 6 men who were around with Atio the morning he died.

Carmina asked the frat men to tell them what happened on the days they were looking for their son Atio.

The family only found out about Atio’s death past midnight on Monday, September 18, through an anonymous text message. The next thing they knew, they saw Atio in a morgue.

“Nobody helped. We found out [Monday] at 1 in the morning. Whoever texted me, I found him, sa funeraria (in the funeral parlor), unidentified. So tell me what happened during those times, those days, because you have to answer for all of that,” Carmina said, looking at the fraternity members seated from across her.

The Castillo couple also asked the members to return the phone, watch, and other belongings of their son.

But instead of getting answers on the details of their son’s death, the Castillos found out about the fraternity’s scheme.

The grieving mother could not help but cry when senators read the Facebook chat conversation between fraternity members, especially that of frat member Jose Miguel Salamat. (READ: What’s inside the Aegis Juris alumni chat box when Atio was killed)

Salamat, in the FB group chat, said Atio’s phone was with him and that the latter’s parents kept on calling.

The senators also took note of Ronald Cheng, who supposedly works in the second division of the Supreme Court.

Cheng, in the group chat, said he saw where the CCTV is installed near the fraternity library, and that it doesn’t cover the area.

It seemed that not only the fraternity members were intent on concealing the truth.

For Senator Grace Poe, vice chair of the Senate committee on public order conducting the hearing, the Trangia couple could be guilty of it, too.

Poe asked Rosemarie and Antonio several questions, but the couple only invoked their right against self-incrimination.

Antonio refuted the claim of John Paul Solano that the Trangia’s family driver Romeo Laboga was with him when they brought Atio to the Chinese General Hospital on the morning of September 17.

Antonio said Laboga was with him on that day: “Driver ko po kasama ko po noong allegedly nasasangkot ang sasakyan namin.” (I was with my driver at the time when our car was allegedly used.)

Senator Juan Miguel Zubiri, a family friend of the Castillos, warned Antonio that many witnesses already attested to the presence of Laboga.

Poe then asked Rosemarie why she suddenly brought her son to the US in the middle of an ongoing semester in school. The latter, however, refused to answer questions just like her son.

“Pasensya na po, parang may pinagmahan ang anak ninyo,” Poe said. (Pardon me but it seems your son got it from you.)

Rosemarie said there is already a pending case against her and that she would rather keep quiet first.

Poe told the Trangia parents that if they know Ralph is not involved in the killing, they should speak up and say if they are being threatened.

(Mr Chair, we’re seeing parents wanting to protect their children. But if you know your child has no direct involvement in the killing of a person or was forced by companions [cover up for what they did], the best thing to do is to say it.)

Poe then asked the father for the plate number of his red pick-up truck, but the latter again refused to answer.

Poe said their repeated invocation of the right against self-incrimination only means they are hiding something.

“Alam naman natin may ‘tinatago na talaga rito. Mas pinapalala ninyo ang inyong sitwasyon. Sa umpisa, naintindihan ko ang unang kilos, pero kung patuloy ‘nyong pagtatakpan ang isang bagay na mali ay di na kayo matutulungan,” Poe said. (We know you are hiding something here. You are making your situation worse. At first, I understood your actions for your child, but if you keep on concealing a wrongdoing, it will not help you.)

Fraternities have their code of silence, which bars members from speaking the truth to other non-members to protect themselves and the organization.

It was also the internal code that Solano likely broke when he revealed details of Atio’s death to senators in an executive session, which was later revealed to the public.

Solano lamented that he was made the fall guy after he was left alone with Atio at the hospital. He maintained he was not present during the initiation rites and was at home preparing for work.

Most fraternity members present during the hearing kept invoking their right against self-incrimination, including the head or the Grand Praefectus of the fraternity, Arvin Balag.

Balag, Solano said, was the one who asked him to lie to authorities by saying he saw Atio’s body on a pavement in Tondo, Manila.

Balag’s evasion of questions prompted senators to cite him in contempt and order his detention. He repeatedly refused to answer if he is the leader of the fraternity even after senators presented documents showing it.

Balag also declined to give his DNA samples to check if it would match with those found in the paddle in the frat library. Mark Ventura, Joshua Macapili, Bongget Rogelio, and Axel Hipe also refused to do so.

Oliver John Onofre, Ralph Trangia, and Mhin Wei Chan said they would give samples only if there is a court order.

According to Solano, the 6 members present the morning Atio died were Onofre, Hipe, Balag, Ventura, Zack Abulencia, and Dan Ragos.

Jason Robiños, for his part, agreed to do the DNA test, as he earlier cited a CCTV footage that shows he was in his boarding house during the hazing.

Salamat, Zimon Padro, and Aaron Salientes also said they are willing to take the test.

Horacio Jr said they still have to consult lawyers regarding the filing of charges against the members in the group chat. While Horacio Jr believes they have a strong case, he admitted feeling pity for the members involved in the killing of his son.

He also said the members are only buying time in consistently invoking their right against self-incrimination.

As for the Castillo family, the search for the truth and justice continues.

Senator Panfilo Lacson, chair of the committee on public order and dangerous drugs, said there will be another hearing to tie loose ends in the story. Lacson said the revelations in the hearing will be useful in the investigation. – Rappler.com