MANILA, Philippines – A lawyer on Wednesday, October 25, again raised questions on the ownership of the subsidiaries of Venezuela-based company Smartmatic, which provided the automated election system (AES) in the Philippines’ last 3 polls.

In a media forum in San Juan City, Manuelito Luna presented documents showing that two subsidiaries of Smartmatic in the Philippines were “100% owned,” supposedly in violation of the Anti-Dummy Law. Luna said the files were by London-based audit firm KPMG.

One document is titled “Annual Report and Consolidated Financial Statements” as of December 31, 2016 for holding company SGO Corporation Limited, of which Smartmatic is a part of.

In the table for “Investments in subsidiaries controlled entities,” Smartmatic Philippines Incorporated and Smartmatic TIM Corporation are indicated to be “100% owned” in 2015 and 2016 by SGO Corporation.

A third subsidiary, Smartmatic TIM Corporation 2016, is reflected to be “47% owned.” He presented a second document with the same title, but for Smartmatic Limited, as of December 31, 2013. It also reflected Smartmatic Philippines Incorporated and Smartmatic TIM Corporation being “100% owned” in 2012 and 2013.

Under Philippine laws, at least 60% of a corporation should be Filipino-owned. 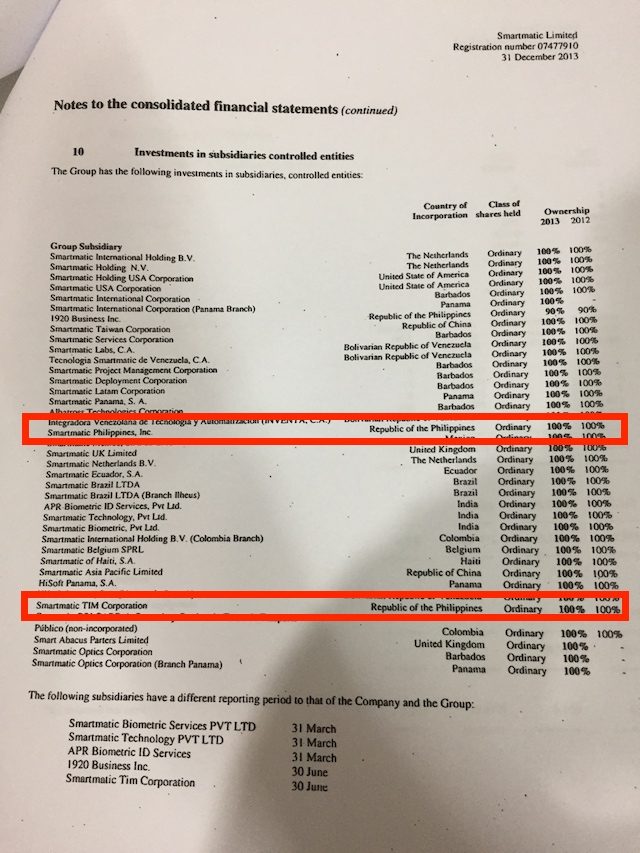 “They always say that whenever they participate in the procurement of AES-related technology for the elections, they always claim 60-40. But where is the 60-40 there?” asked Luna.

Their registration with the Securities and Exchange Commission (SEC) might seem to comply with the law, argued Luna. “But as far as the document in London [goes], it’s not 60-40. So something’s wrong. Which is which?”

“What we have been saying all these years that it may be violating or in violation of our Anti-Dummy Law is really proven not by rumors… but by documentation,” he added.

Luna was the legal counsel for ex-congressman Jacinto Paras and lawyer Ferdinand Topacio who filed an impeachment complaint against now-former Commission on Elections (Comelec) Chairman Andres Bautista. Bautista’s resignation was made “effective immediately” by President Rodrigo Duterte on October 23.

He is also the lawyer for former representative Glenn Chong, who filed a graft case before the Ombudsman against now Acting Comelec Chairman Christian Robert Lim over a nullified 2015 contract between Smartmatic and Comelec concerning the upkeep of vote-counting machines.

“My challenge now to Smartmatic Philippines is to disprove us, by coming up with a more acceptable explanation,” said Luna. “Because these documents are unimpeachable. This did not come from here, you cannot say this is fabricated, co-opted, or this is tampered.”

Smartmatic has been hounded by criticism due to its involvement in the conduct of the 2010, 2013, and 2016 automated elections. It provided vote-counting machines and the consolidated canvassing system, among other services. (READ: How does the PH automated election system work?)

“This boils down to credibility. And elections are about credibility,” Luna said.

“No foolishness, no hocus pocus, no hanky panky. There should be full transparency. And we demand that from the Comelec and from Smartmatic,” he said in a mix of English and Filipino.

Luna also suggested that in light of the accusations against Bautista and on the 2016 elections, Smartmatic should “voluntarily not participate anymore” in future polls.

Rappler has been trying to reach Smartmatic for its side as of posting. – Rappler.com