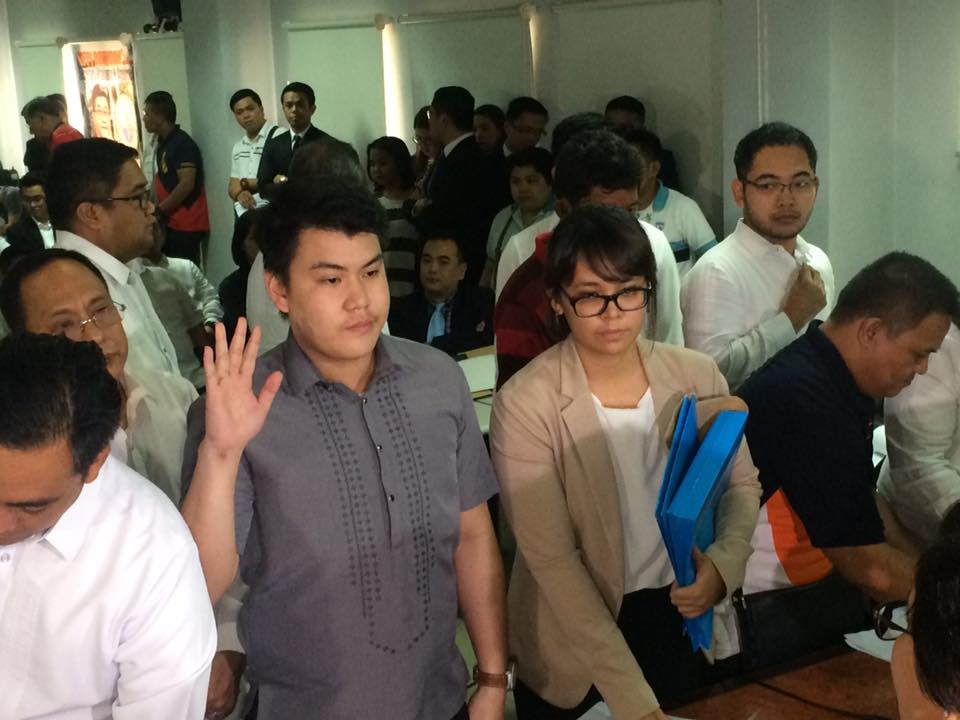 Aguirre was narrating some of the details in the testimony of Aegis Juris fratman Mark Ventura, who turned state witness on Wednesday.

On Sunday, September 17, it was only Castillo who underwent initiation rites, said Ventura as quoted by Aguirre. The rites started around 1am and ended by  5 am when Castillo fell unconscious. Aguirre said it was Hipe who led the entire thing.

The first part was the punching of Castillo, which Aguirre said lasted 1 hour.

“It was the decision of the initiator, kung okay na, puputok na, tama na, it was the call of the master initiator,” Justice Undersecretary Erickson Balmes said, referring to Hipe.

Hipe, in his counter-affidavit, said there is no probable cause to charge him of murder and violation of the Anti-Hazing law.

The 2nd part was hitting Castillo’s arms with a spatula-like object to “calm the muscles down.” The last part was paddling, and Aguirre said Castillo was to take 11 paddles because it’s the rules for neophytes going through the rites on his own.

Aguirre said that according to Ventura, some of the fratmen suggested dropping melted candle wax on Castillo to force a response.

This happened before 5 am on September 17. Then they called John Paul Solano, trusting him to apply first aid on Castillo because of his background as a medical technologist. Solano told a Senate panel it was Oliver John Onofre who called him.

According to Aguirre, still quoting Ventura, Castillo has already been boarded on a vehicle to be taken to the hospital but when Solano arrived, they brought him inside the fraternity library again.

“May pulse pa that time, may heartbeat pa, kaya they tried to revive him, kaya binaba ulit nila, pinasok nila ulit sa library, nung hindi sila nag succeed, saka lang nila sinakay sa pickup,” Aguirre said. (Castillo still had pulse that time, he still had heartbeat that’s why they tried to revive him, that’s why they brought him down again and took him inside the library. When they didn’t succeed, that’s when they boarded him onto the pickup.)

The plan was supposedly to bring Castillo to the Jose Reyes Memorial Medical Center (JRMMC), which is beside the Department of Health (DOH) and a few minutes drive from the fraternity library on Laong Laan Street.

The Solano convoy eventually brought Castillo to the Chinese General Hospital, which is roughly the same distance as JRMMC from the library.

The nearest hospital would have been the University of Santo Tomas (UST) hospital which was just across the road, inside their own school campus.

GP stands for Grand Perfectus, who was identified to be Arvin Balag. Balag is detained in the Senate where he was held in contempt for not answering questions from Senators.

Solano said he drove his motorcycle, while Hipe and Balag rode a black Toyota Fortuner. The unconscious Castillo was on the red Mitsubishi Strada pickup supposedly owned by the family of Ralph Trangia. Solano said he didn’t see Trangia on that morning.

A report by the Manila Police District said Castillo was declared dead on arrival by the attending doctors at the emergency room of the Chinese General Hospital around 9:20 am of September 17.

Aguirre said that even though the Witness Protection Program (WPP) is open to everyone, except the most guilty, Ventura’s testimony might already suffice.

Ventura named all the individuals who participated in the initiation rites, including a group of 7 who held karaoke sessions to cover up the noise from the hazing. Aguirre said Ventura’s list included the individuals who were put on the lookout bulletin, and then some more. – Rappler.com