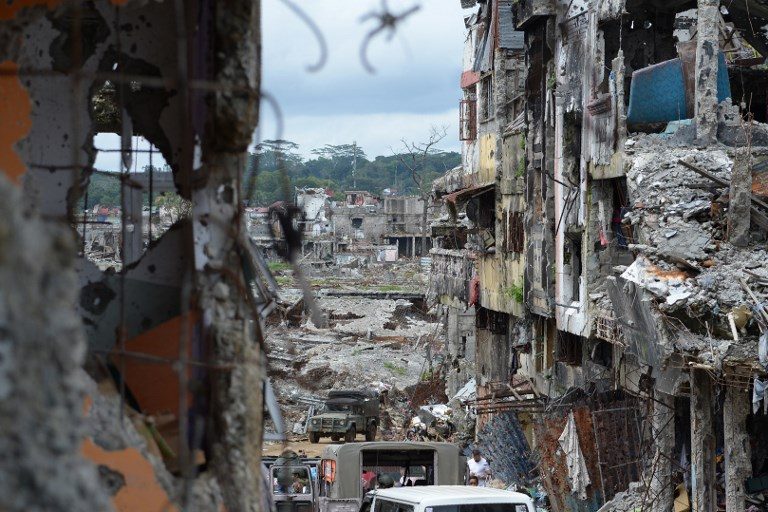 MARAWI CITY, Philippines – With this city won back from pro-ISIS fighters, military troops have begun their gradual exit, allowing civilian officials and journalists to enter the blockaded central district where most of the fighting took place.

The view that unfolded was staggering: 5 months of heavy shelling has left Marawi’s center of life and commerce an apocalyptic wasteland. Pockmarked chunks of steel and concrete that used to be homes, shops, schools and mosques covered the streets, except where bombs had left craters.

Although thankful that the fighters of the Maute armed group have been flushed out of their city, some local leaders wondered if its physical destruction – mostly from military aerial bombings – could have been avoided.

“We were against the air strikes from the very beginning,” said Zia Alonto Adiong, a regional legislator and spokesman of the civilian committee that manages the Marawi crisis. “We were hoping for a different strategy.”

“It was overkill,” said Agakhan Sharief, spokesman of a local council of ulama or Islamic authorities. “Why? Because there was an opportunity for negotiations with the Maute. They were considering surrender.”

Government troops were caught off-guard when the Maute fighters attacked Marawi on May 23, aiming to set up a “caliphate”, inspired by the Islamic State of Iraq and the Levant (ISIS) group.

The Maute group’s leaders and many of its fighters knew the city well. They built rat holes and mazes through adjoining buildings and moved around in the sewers, while their snipers nested on tall structures.

Military leaders were quick to admit weaknesses: their troops were not used to urban warfare; they had underestimated the attackers’ numbers and firepower.

As scores of military and police officers died early in the battle, many from sniper fire, the government launched air raids to prevent further losses.

The move sparked opposition and criticism from local civic and religious leaders but the military justified it. Army Lieutenant Colonel Emmanuel Garcia said they were using “appropriate and commensurate force because [the Maute fighters] have the advantage of knowing the different nooks and crannies of the city”.

“We are not being irresponsible in the use of air strikes,” he added. “These are deliberate. These are planned.”

However, misdirected air raids ended up killing 13 of the government’s own soldiers. A hostage who escaped from the Maute told Al Jazeera that he witnessed a government bombing that killed at least 10 civilian captives.

About a month into the siege, the military started gaining the upper hand and some Maute fighters signified their intention to surrender.

During a brief ceasefire on the Muslim feast of Eid al-Fitr, Sharief and 7 other ulama entered the war zone to speak with Abdullah Maute, a leader of the fighters, to negotiate for hostages.

Duterte, in whose hands rested the fate of the peace deal, was unequivocal on the matter: “We do not negotiate with terrorists,” he said in a public address.

Even without formal talks, Adiong said the Maute made tall demands, including their safe exit from Marawi in exchange for hostages. “That was unacceptable. Even the civilians would not have agreed to that,” he said.

With the government intent on military action, its forces had little choice but to attack from the air, said Jose Antonio Custodio, a security analyst and former consultant of the Philippines’ National Security Council.

“The Maute group had complex fortifications and defence positions while the military was hamstrung by the urban setting,” he said.

“So it would be unfair to say the Marawi war was overkill,” he added. “But I understand why the locals feel that way.”

With roughly 400,000 people displaced from their homes or jobs, the Philippine government is under pressure to rehabilitate Marawi quickly and effectively.

“Or else, the people will be ripe for rebel influence,” Custodio warned. Pro-ISIS groups at large may pounce on people’s resentment to recruit fighters.

“We must remind the people who the real enemy was,” said Adiong, who now helps coordinate efforts to rebuild the city. “None of this would have happened if the Maute did not attack us. It was really their fault.” – JC Gotinga, Al Jazeera | Rappler.com