Oct 31, 2017 6:45 PM PHT
Eloisa Lopez
Facebook Twitter Copy URL
Copied
'There are thousands more like me. I don't want other mothers to experience what I went through,' says Marielyn Segovia, whose 15-year-old son was killed in December 2016 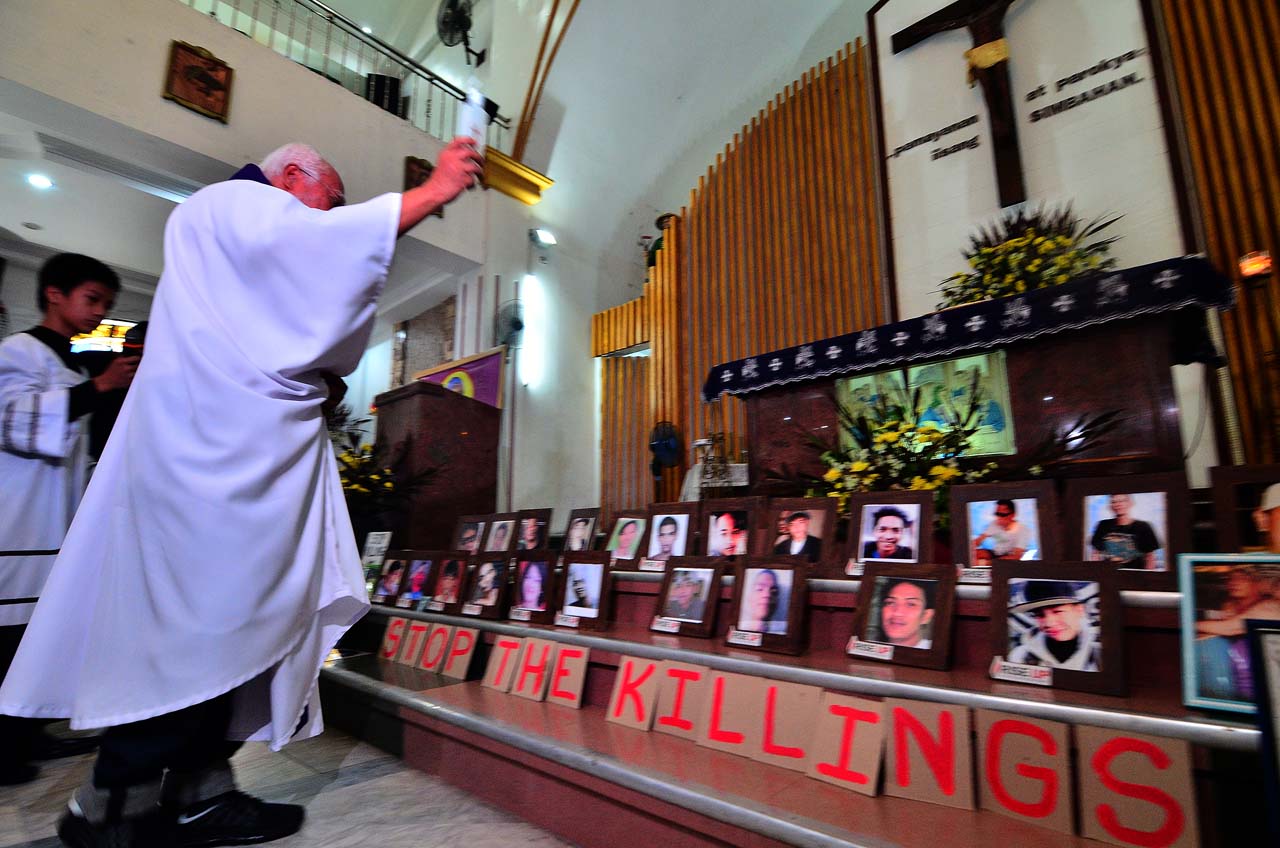 MANILA, Philippines – As if burying their sons is not painful enough, mothers of teenagers who were killed in the war on drugs also have to bear the burden of seeking justice for their children.

Feli Escudero, mother of 18-year-old victim Ephraim Escudero, said the police have been of no help to them since her son went missing near their house in San Pedro, Laguna, on September 19.

“When we reported him missing, the police just asked us to update them if we hear any reports about him,” Feli told Rappler in an interview.

“We felt no action from them,” Ephraim’s sister, Sheerah added. “It was as if they were just waiting for anything to come up.”

Ephraim was last seen with two men who forcibly hitchhiked on his motorcycle. Two days later, he was found dead in Angeles, Pampanga, his head wrapped in packaging tape, and his arms and leges bound together.

Not far from where Ephrain was found, Ronnie Pionilla, 52 was also found dead and summarily executed. He is believed to be one of the two men who rode with Ephraim.

It has been over a month since the teenager’s death, but the police have yet to give any updates on his case.

Feeling helpless, Feli and Sheerah joined the gathering of families to speak and seek justice for victims of drug-related killings at the San Labrador Parish Church in Bagong Silang, Quezon City, on Tuesday, October 31, the eve of All Saints’ Day or Undas. 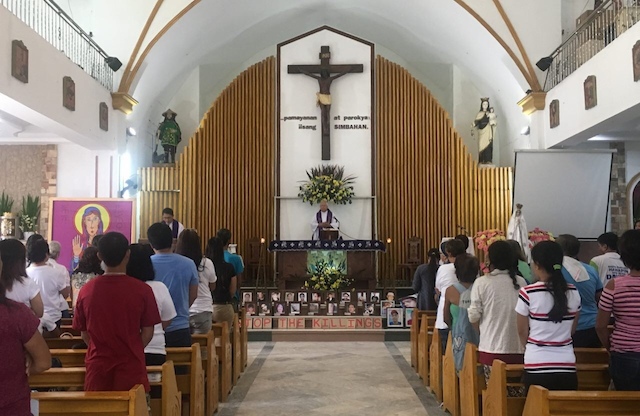 “If we do not speak, his death will go to waste, to never be remembered again. If we do not say what really happened, nothing would happen,” Sheera said.

“Our justice system is failing. We don’t even know if we are being heard when we speak. We don’t know if they are even listening,” she added.

In his homily, parish priest Fr Gilbert Billena said while the country has a government that is “heartless to the poor” bereaved mothers, orphaned daughters, and widows should never to give up on seeking justice for their loved ones.

“There is no other source of strength than the support we give each other, so let us not stop,” he added.

Despite the need to make ends meet on a daily basis, 33-year old Marielyn Segovia makes time for gatherings and protests for victims of extrajudicial killings.

A pregnant woman and two other teenagers were killed on the same night. Police claimed in an Inquirer report the killings were the “result of a gang war.” 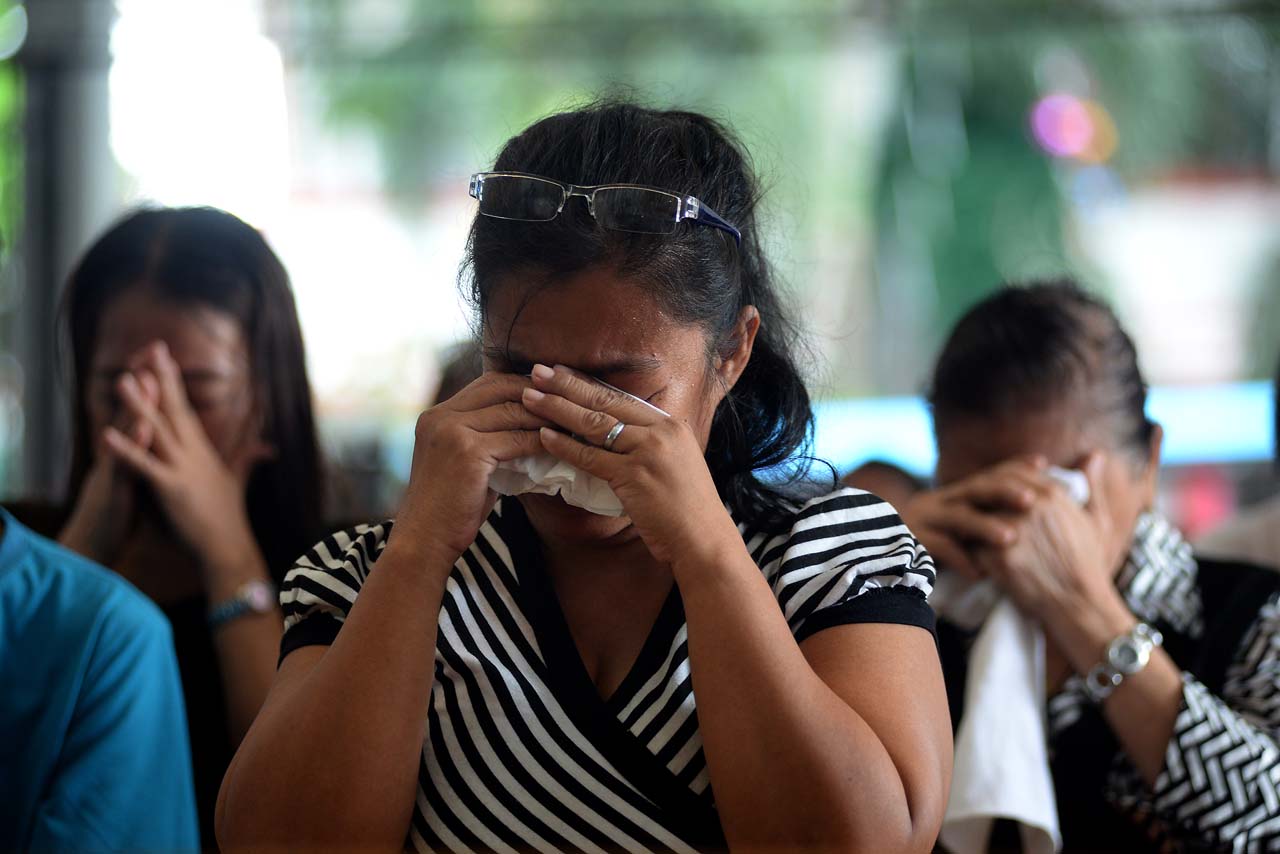 The community, however, is convinced that the gunmen were after a drug suspect whose parents owned the house where the teenagers were partying, especially since none of the slain teens had any history of drug use.

While her son may be “collateral damage” in the drug war, Marielyn remains relentless in rallying against drug-related killings.

Like a mother to all, Marielyn joins all gatherings and protests she is invited to, in support of other mothers who lost their children in the drug war.

“It was not just me who lost a son, there are thousands more like me. It happened to me, and I don’t want other mothers to experience what I went through,” she  told Rappler.

‘Ready to serve and protect’

Even as the rain poured after the Mass, the mothers proceeded to the Batasan Police Station in Quezon City to send a message to the Philippine National Police (PNP) and the government. 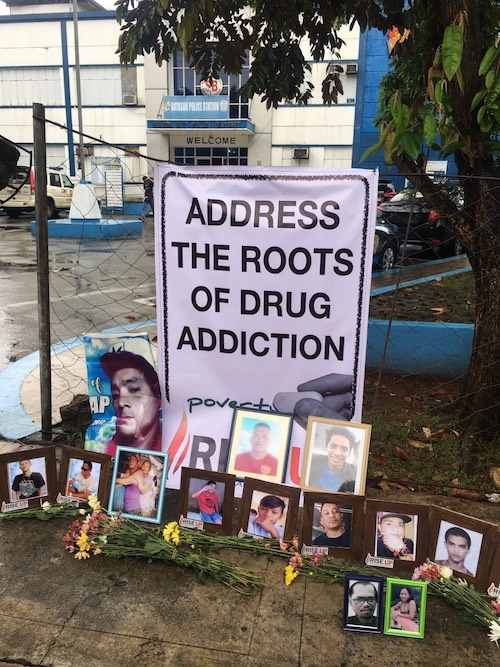 Holding up protest banners, they chanted, “Stop the killings,” in front of the station. A banner was also pinned to the police station’s fence, which read, “Address the roots of drug addiction.”

Quezon City Police District Station 6 Commander Superintendent Rossel Cejas said that while they respect the families’ right to protest, the police no longer have the power over drug-related cases.

“Since two weeks ago, we have turned over the cases to PDEA (Philippine Drug Enforcement Agency),” Cejas said in an interview.

On October 11, President Rodrigo Duterte named the PDEA as the sole agency in charge of the drug war, amid criticism of the death toll in the key administration campaign which was led until then by the PNP.

Cejas also claimed that some barangay officials have “complained” to them that the drug problem has been getting worse since the PNP were suspended from leading the drug war operations.

He  asked the families not to be afraid of the PNP. “I hope they stop fearing the police because we are still here to do our job, to serve and protect,” Cejas said. – Rappler.com