For parents of Atio, Guillo, ‘the pain doesn’t go away’ 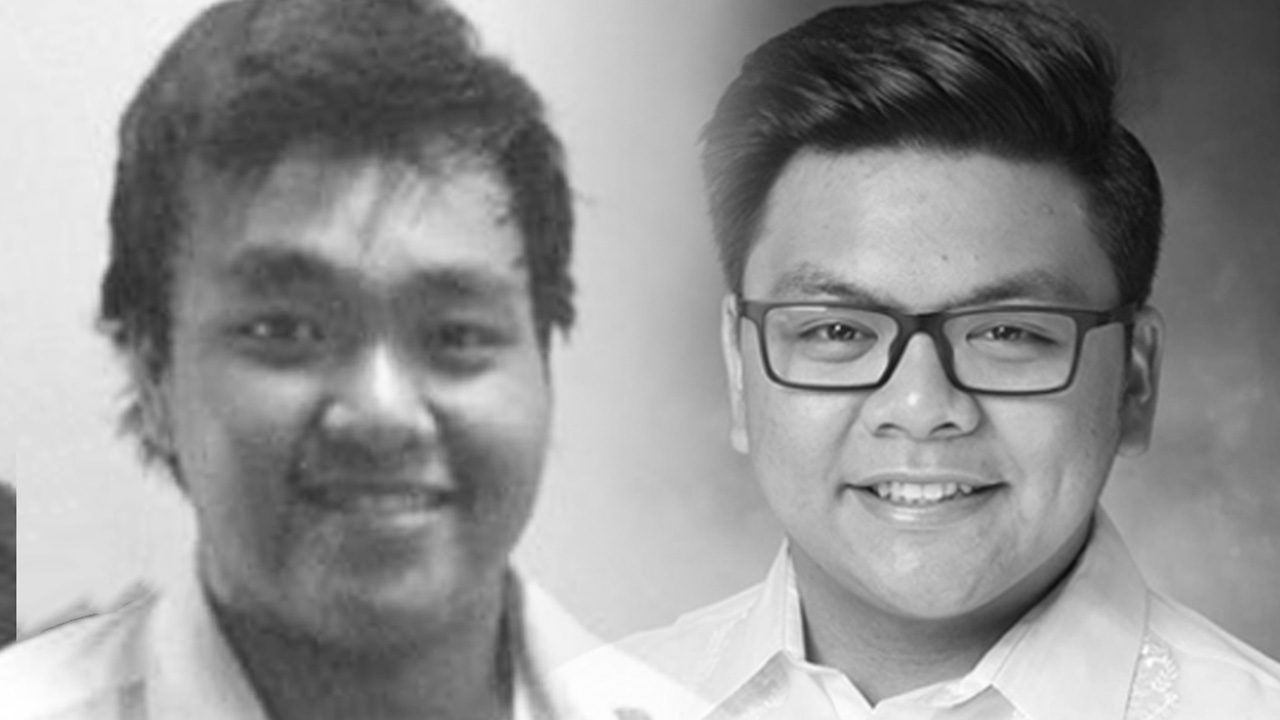 Facebook Twitter Copy URL
Copied
'Who would imagine that come November 1 we would be here at wala na ang anak namin?' says a tearful Horacio Castillo II of his son Atio

MANILA, Philippines – November 1, the day for the dead, is when most Filipino families gather to remember their beloved who have passed away.

For the Castillo and Servando families this is a day of tears.

Both families recall Horacio “Atio” Castillo III and Guillo Cesar Servando, who both died in the hands of young men they wanted to call their brothers.

“It’s unimaginable, two months ago magkakasama pa kami, we were living normally, who would imagine November 1 we would be here wala na ang anak namin,” said a tearful Horacio II when they visited Atio at the Manila Memorial Park in Parañaque afternoon of Tuesday, October 31.

(It’s unimaginable, two months ago we were stil together, we were living normally, who would imagine that come November 1, we would be here without our son.)

‘Those are just remains’

Atio was never a fan of All Saints’ Day.

“He’s not superstitious, he said those are just remains, what’s important is the spirit,” Carmina Castillo said of her firstborn.

In fact, Carmina said, Atio would not have wanted them to visit his grave. In the past occasions that they did, it rained, prompting Atio’s younger sister Nicole to remind her parents: “Sabi ko sa ’yo ayaw niyang pumupunta tayo eh, nafi-feel mo na ba Ma, na ayaw niya?” (I told you he doesn’t want us to visit, do you feel now Ma, that he doesn’t want us to?)

It is “indescribable pain,” Horacio II said, to visit Atio in his grave. No parent should ever have to bury his child, he said, tearful.

When he was alive, Carmina would convince Atio to follow the Undas tradition by saying it’s a time for the family to be together. Atio would argue: “But we always have time.”

Now, they no longer have time.

Perhaps the reason why Atio did not want to be visited was to spare his family the pain of being reminded he was gone. But a month since his death, Atio’s parents are still emotional when they talk about their son.

‘It doesn’t go away’

Aurelio Servando, Gullio’s father, knows that there will be no end to tears.

Guillo’s cremated remains are in an urn sitting inside the adjoining room of the Servando home in Makati. Aurelio and his wife live in Iloilo now.

Guillo, a culinary arts student of the De La Salle-College of St Benilde, was killed in July 2014 during the initiation rites of the Tau Gamma Phi fraternity.

When he learned of Atio’s killing, Aurelio went to the wake to pay his respects to the young man. He said Atio shared a lot of similarities with his son Guillo.

In front of Atio’s coffin, Aurelio recalled Carmina Castillo asking him: “How long does the pain last?”

“I’m sorry, but it doesn’t go away,” was Aurelio’s honest answer.

He knew this all too well. (READ: To the murderers of Guillo: Live a meaningful life)

“It’s an abnormality for us to visit Guillo on All Saint’s Day, it’s very much difficult for a parent to be going through that routine,” Aurelio said.

The most difficult occasion for them is Christmas. “It’s not as happy anymore,” Aurelio said in between tears, barely getting the words out.

According to the sensational testimony of suspect-turned-witness Mark Anthony Ventura, identified as the Secretary of Aegis Juris fraternity, Atio still had a pulse and heartbeat early morning of September 17. That was when they put his unconscious body in a vehicle that was supposed to make its way to a hospital.

But the fratmen desperately wanted to keep it under wraps, calling the help of their brother, medical technologist John Paul Solano to try and revive him. Atio was already inside the vehicle, but they took him out again and brought him inside the fraternity library. They waited for Solano to arrive, further delaying the medical response, according to Ventura.

“They are monsters,” Carmina said on October 30 after another hearing at the Department of Justice (DOJ).

Carmina does not believe that her son’s killers would visit Atio’s grave, now or ever.

“Forgiveness is not an easy thing to do,” she said, “forgetting is also not easy, I cannot forget.”

Carmina describes Atio as being full of love; a young boy full of energy, full of life. It’s a difficult balancing act for her, to keep the love in their hearts – if only to try to give their son peace – and to fuel the anger that pushes them to continue fighting for justice.

Aurelio Sevando has forgiven some of the young men involved in Guillo’s killing. Mostly because he feels for the parents who have also suffered through the years.

But Aurelio would never dare advise the Castillos how to deal with anger, and especially how to forgive.

“I just told them that the best way to ease the pain is try to help others, to commiserate with all those who lost their children. To me, there’s not much of a difference between hazing and extrajudicial killing,” Aurelio said, referring to the thousands of killings that have marred the government’s war on drugs.

In May 2016, the Makati Regional Trial Court (RTC) Branch 53 cleared the suspects in Guillo’s case even before going to trial.

Judge Honorio Guanlao ruled that the “prosecution failed to allege that the final initiation rites was a prerequisite to the entry/admission of the victim to the Tau Gamma Phi fraternity.”

This frustrates Aurelio, that he said, he doesn’t like to “pin [his] hope” on the case pending before the Court of Appeals (CA) seeking a reversal of Guanlao’s decision. “Because I might just be disappointed,” he said.

“I’ve begun to see the justice system as a bamboo grove, a bamboo tree that can be made to sway whichever direction that suits the parties that have money. Our legal system is very flexible, very maneuverable,” Aurelio said.

He joins the chorus of criticism of the loopholes of Republic Act 8049 or the Anti-Hazing Law. Aurelio observed that the law students in Atio’s case seem to be using the strategy of flat-out denials and “seem to be having some success.” (READ: What’s happening to hazing cases in the Philippines?)

“I think it’s because it’s still a new law, there’s still a lot of uncharted avenues where an enterprising lawyer can get his client off the hook,” Aurelio said.

Some of the defenses used so far:

When the Senate resumes its investigation on November 6, Ventura’s gory narration of what happened to Atio is expected to be detailed: that Atio was subjected to hazing for 4 hours, beaten black and blue by more than 10 men, and hit with a paddle 5 times even though he had already collapsed at the strike.

“I’m ready to listen again, and I want everybody to listen kung paano nila pinahirapan and anak ko (how they tortured my son). I want everybody to know the secret procedures that come with the initiation rite, it has to be exposed,” Carmina said, hoping that it would provide senators what they need to strengthen the Anti-Hazing law.

Aurelio is not inclined to tune in to the coverage. “It is such an ordeal to go through everything again,” he said.

Guillo would have earned his degree by now. He had dreams of putting up a healthy restaurant and a gym to combine his interests of working out and eating.

“He would always prefer that our employees would be given merienda, he would always treat them during his birthday,” Aurelio said. The Servando family owns a restaurant in Makati and Iloilo.

Atio, no doubt, would have been the lawyer he always wanted to be, if not a Supreme Court chief justice or even a senator.

Both young men are described by their parents as kind, selfless, and always for justice and fairness.

“He once wanted to be a soldier to fight the world’s inequities,” Aurelio said of Guillo.

Their sons are on the minds of the Castillo and Servando families today. They will be too on the succeeding All Saints’ Days, and perhaps every day for the rest of their lives.

Atio said he didn’t want to be visited, that’s why it always rained when his family came. But on October 31 when they were at his grave, Carmina said the rain stopped.

Perhaps it is Atio reminding them and us to never forget him or Guillo, to never forget that justice for the dead is the eternal responsibility of the living. – Rappler.com