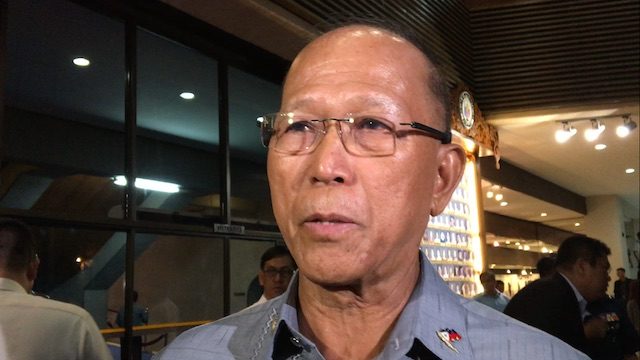 DAVAO CITY, Philippines – Defense Secretary Delfin Lorenzana said the government will punish soldiers who will be found guilty of looting in Marawi City.

The defense chief made the statement in an interview with reporters here late Tuesday night, October 31, when asked about alleged incidents of looting involving soldiers in Marawi during the 5-month siege.

He said he had always vowed to investigate the allegations against the military.

“At sinabi ko naman sa mga nag-a-accuse (I have always told those who have made accusations that) we will look into this. Ito na nga (So here it is). We are going to apply on them the full force of the law,” Lorenzana said.

A Philippine Army officer and 5 soldiers were charged for looting in Marawi, according to Task Group Ranao deputy commander Colonel Romeo Brawner.

Many Marawi residents returned to their war-torn city after finally getting the green light from the government, to find their homes and businesses looted.

The military earlier said that the Maute Group amassed about P1 billion in loot from Marawi City, reportedly buried somewhere in the main battle area.

The military had earlier denied allegations of looting against soldiers. Lorenzana explained that at the time, authorities were still focused on ending the war in Marawi and could not yet look into the claims.

He also said that the government is prepared to pay “reparation” to victims of looting in Marawi City if proven that soldiers committed the crime.

“Kung talagang ginawa ng sundalo at hindi natin ma-pinpoint (If it’s really committed by soldiers and we cannot pinpoint them), we have to make reparation to the owners of the [looted] houses,” Lorenzana said in a chance interview with reporters late Tuesday night, October 31.

Asked whether residents can file cases against the government in connection with the war in Marawi, Lorenzana said, “Well, they are entitled to.”

Some Marawi residents had said that they will file a class suit against the government for the destruction and deaths caused by the 5-month war between the government and local terrorists.

Lorenzana, responding to questions, said the military is prepared to be investigated in any possible congressional inquiry into the war in Marawi. “Of course, if that’s within the bounds of the law,” he said. – Rappler.com