MANILA, Philippines – The University of Santo Tomas on Sunday, November 5, will open its doors to a total of 7,227 admitted candidates who will take the 2017 Bar examinations – the 116th to be held in the Philippines, according to the Supreme Court (SC).

According to the SC’s Public Information Office, this year’s examinations will be conducted on all Sundays of November, and examinees will take up two subjects for each Sunday, for a total of 8 subjects:

The SC, which administers the annual examinations through a Committee on Bar Examinations, received a total of 7,270 applications for the 2017 Bar examinations.

It denied admission to 13 candidates for various reasons, while another 30 candidates withdrew their applications, which means only a total of 7,227 candidates will take the exam beginning Sunday.

Manila Police District Spokesperson Police Superintendent Erwin Margarejo said they will deploy policemen to the area as early as 4 am Sunday.

Their deployment will include explosive ordinance disposal (EOD) paneling, while “all 4 corners of UST” will have closed-circuit television (CCTV) monitoring.

“Health service is also tasked to provide medical personnel for emergency cases. Covert security will also be deployed in the school premises. All tasked personnel shall strictly implement no tents and tarpaulins, prohibitions and drinking of intoxicated beverages and no loud music at the vicinity of UST during the duration of the Bar examination,” he added.

The Committee on Bar Examinations consists of 8 examiners – one for each Bar subject – who are considered experts in their particular fields. The committee chair has the discretion to choose these examiners, and they are bound by strict confidentiality during the Bar examinations.

According to the SC, this year’s number of applications and number of admitted candidates are much higher than during the last 3 Bar examinations: 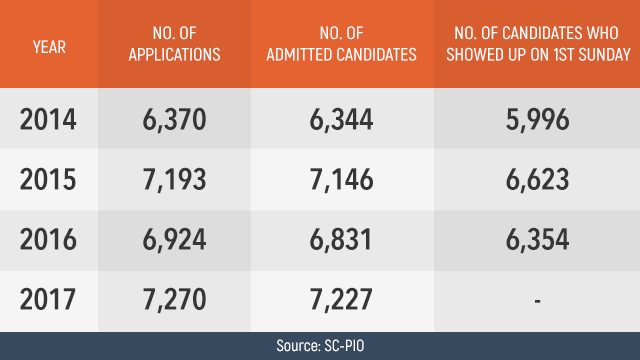 Rappler learned that the 2016 passing rate is the highest in decades because the Bar chairman, Associate Justice Presbitero Velasco Jr, was more “reasonable.”

Velasco even declared from the get-go that he wanted a high passing rate for 2016.

Karen Mae Calam of the University of San Carlos in Cebu topped that year’s examinations with a grade of 89.05%. – Rappler.com