Nov 4, 2017 10:30 PM PHT
Jee Y. Geronimo
Facebook Twitter Copy URL
Copied
'Shibby has shown us that we don’t have to have hundreds of thousands of followers...to be recognized in the world – distinction follows where we choose to be decent and conscientious human beings,' says Senator Leila de Lima 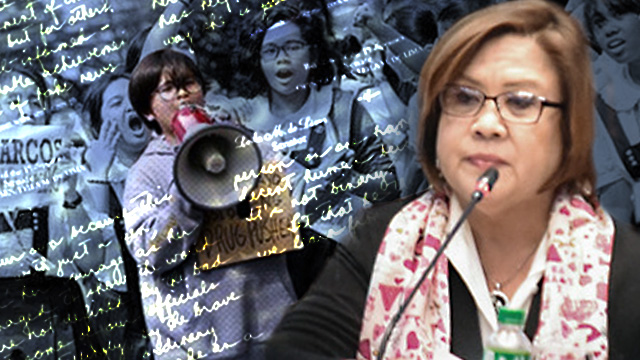 MANILA, Philippines – Senator Leila de Lima on Saturday, November 4, congratulated 14-year-old Shibby de Guzman for her “extraordinary achievement” of landing a spot in TIME’s list of “30 Most Influential Teens of 2017.”

De Lima said Filipinos should be inspired by De Guzman’s feat –  she is an “ordinary school girl” who became influential “because of her desire to be an instrument of change.”

TIME recognized De Guzman for speaking out against President Rodrigo Duterte during a protest of St Scholastica’s College students, where she and her fellow students opposed the hero’s burial for the late dictator Ferdinand Marcos and the spate of killings in the government’s war on drugs.

“She isn’t just well-informed – which is a commendable achievement in itself in this age of fake news and click bait mentality geared at garnering fame, power and influence through imaginary internet points – she also chooses to do something to change the unfortunate status quo for the better,” the senator said in her handwritten statement.

De Lima commended De Guzman, saying the teenager “distinguished herself for a good and unselfish cause, despite the peril that becoming a ‘dissenter’ presented.”

“That is a level of maturity, patriotism and humanity that not even some geriatric members of the Philippine government have been able to demonstrate,” De Lima pointed out.

She also hailed how De Guzman managed to “show the world” that Filipinos are defined “by the brave choices that seemingly ordinary and powerless people make on a daily basis.”

“Shibby has shown us that we don’t have to have hundreds of thousands of followers, or the most expensive and high tech gadgets and worldly possessions to be recognized in the world – distinction follows where we choose to be decent and conscientious human beings,” De Lima added.

There’s a lesson to learn from De Guzman’s feat, according to De Lima: “You can simultaneously be both a famous and influential person on one hand, and a decent human being on the other. It’s not binary. Let that be the lesson that we learn from this 14-year-old.”

De Lima,  who is currently detained at the Philippine National Police Custodial Center over drug charges she claimed to be administration harassment,  herself made it to this year’s TIME list of “The 100 Most Influential People” in the world, together with President Duterte.

Even in detention, De Lima has continued to be one of Duterte’s fiercest critics. She has also remained vocal against the administration’s ongoing campaign against illegal drugs.

The senator was recently awarded the highest human rights award from Liberal International for being a “flag-bearer” for human rights in the Philippines. – Rappler.com