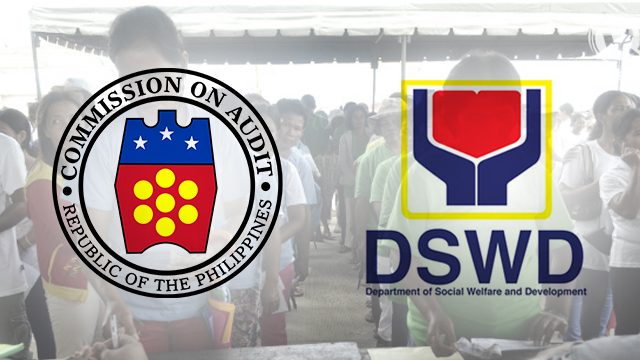 Facebook Twitter Copy URL
Copied
4Ps director Leonardo Reynoso says that despite the COA findings, they still need to validate the real conditions of the 1.3 million beneficiaries that have already crossed the poverty line

MANILA, Philippines – The Department of Social Welfare and Development (DSWD) said they can’t immediately delist the 1.3 million beneficiaries of its Pantawid Pamilyang Pilipino Program (4Ps) the Commission on Audit (COA) found to be ineligible.

In its latest performance audit of the government’s primary anti-poverty program, the state auditor found that 30% of the 4.4 million 4Ps memberships are already ineligible to receive cash grants because they have crossed the poverty line.

The 4Ps is Philippines’ version of the Conditional Cash Transfer program that releases cash benefits to extremely poor families, in exchange for ensuring their children go to school, or expectant mothers going to regular check-ups.

4Ps national director Leonardo Reynoso told Rappler that despite the COA findings, they first have to finish the validation of the 1.3 million beneficiaries before they can delist them.

“We want to be sure that this 1.3 million are really out of poverty for us to remove them from the program. When you say they are not poor anymore, that doesn’t mean that they are rich. They can still be vulnerable when a crisis hits their family or the society,” explained Reynoso.

“Once we confirm that, that’s when we will recommend to remove them from the program. What we are avoiding is the influx of complaints [from beneficiaries asking] why they were delisted from 4Ps,” he added.

The DSWD is currently conducting its “Kamustahan” sessions where they go on the ground to speak with the beneficiaries regarding their conditions. This is done by another office in the DSWD that hired community welfare assistants that conducts the assessment.

Reynoso’s unit is also conducting its own internal review through re-certification of existing members.

Former social welfare secretary Judy Taguiwalo earlier said that they are eyeing the completion of the Kamustahan by year-end. But Reynoso said that it is unlikely to finish this year due to problems in the procurement of assessment forms.

COA recommended that the DSWD should continue its ban on accepting new members until their data collection is fixed. This comes amid a proposal from Senate Finance Committee Chairperson Loren Legarda during last month’s budget hearing that 4Ps should be open to more beneficiaries by 2017.

Should the additional budget be granted, Reynoso said that they would have to implement it while taking note of the COA recommendations, which includes proper data validation.

He said that they currently have a system to independently check the data that comes from the DSWD’s National Household Targeting office, which is the basis on who gets to enter the program or not.

In 2016, the 4Ps unit issued laptops to their municipal and city offices so that data can be validated and updated from the ground and by the beneficiaries themselves.

The COA report also noted that the program has given 88% of its members access to public health services and education to 9 million children. However, data still do not automatically link these to the reduction of the country’s poverty incidence.

Reynoso explained that since 4Ps aims to end inter-generational poverty, it will still take some time before this could directly reduce the number of poor families.

“Children would still have to finish high school, enter college or a vocational course and get a job before the effects of the program will be felt,” he explained in Filipino. – Rappler.com