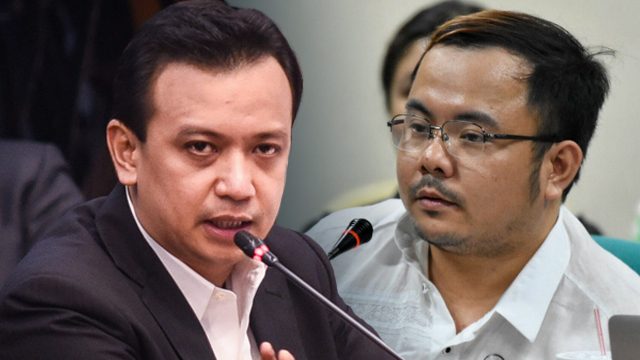 MANILA, Philippines (UPDATED) – Senator Antonio Trillanes IV said on Tuesday, November 7, that he will file a libel case against Thinking Pinoy blogger RJ Nieto for allegedly peddling “fake news” that he is a drug lord.

Trillanes said in a news briefing on Tuesday that the complaint will be on Nieto’s post on a column on the supposed exchange between a journalist and US President Donald Trump, wherein the US chief allegedly tagged the senator as a “little narco.”

Pedroche has since apologized to the senator, and Trillanes accepted his apology. On Saturday, Trillanes said he was also waiting for an apology from Nieto and Reyes.

Trillanes maintained on Tuesday that there was nothing irregular about his trip to the US, where he met with lawmakers, including Republican Senator Marco Rubio, one of the critics of the Duterte administration’s bloody drug war.

When asked at the Tuesday briefing, the senator said he would still pursue a libel case against Nieto even if he apologized.

(Well, it’s already done. There’s a deadline for this. So I’ll be filing that in the days to come…. He will fall under the cybercrime offense of libel. Because, that narco label… Narco? I’m like a drug lord? That’s derogatory; that’s libelous. Nothing. It’s bogus. They know that they just made it up.)

He said Nieto and other online defenders of Duterte seem to find it so difficult to admit their mistake.

(He shared the article then commented on it…the columnist [who wrote it] already apologized…. But he, who was the one who shared it, is really determined. This person, like his master, Mr Duterte, feel uneasy at the prospect of apologizing. Admitting a mistake seems so hard for them to do.)

As for his US trip, Trillanes said he was puzzled as to why it became a “big deal” when other Philippine senators have also gone on foreign trips.  (READ: Trillanes says he only presented ‘facts’ in meeting with US senator)

In September, the senator filed criminal charges – including cyberlibel – against another pro-administration blogger, Palace Communications Assistant Secretary Mocha Uson, for spreading “fake news” that he owned offshore bank accounts and for other alleged unlawful acts committed by the official. – Rappler.com