Senate moves resumption of session due to ASEAN 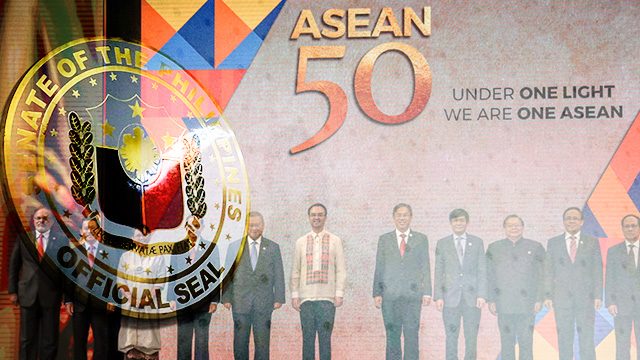 MANILA, Philippines – The Senate has rescheduled its resumption of session from November 13 to November 16 due to the 31st Association of Southeast Asian Nations (ASEAN) Summit that will be hosted by the Philippines.

In a statement on Wednesday, November 8, Senate Secretary Lutgardo Barbo said session was rescheduled in compliance “with the security measures to be enforced during the conduct of the 31st ASEAN Summit.”

“I am concerned about the workload of the Senate as a legislative body. Its functions on investigations and public hearings are necessary in the law making process. May importanteng proposals pa na dapat tapusin (There are important proposals that should be finished),” Barbo added.

The Senate will resume plenary deliberations on the proposed 2018 General Appropriations Act on November 16 and 17.

The proposed budget includes a P10-billion allocation for the rehabilitation of Marawi City in 2018 – a fund sourced from the National Disaster Risk Reduction and Management’s 2018 budget.

This amount is on top of the P5 billion given for 2017 from the Contingent Fund and funds of different government agencies.

Aside from the proposed 2018 budget, senators will also tackle other priority bills such as the Tax Reform for Acceleration and Inclusion bill once session resumes. – Rappler.com