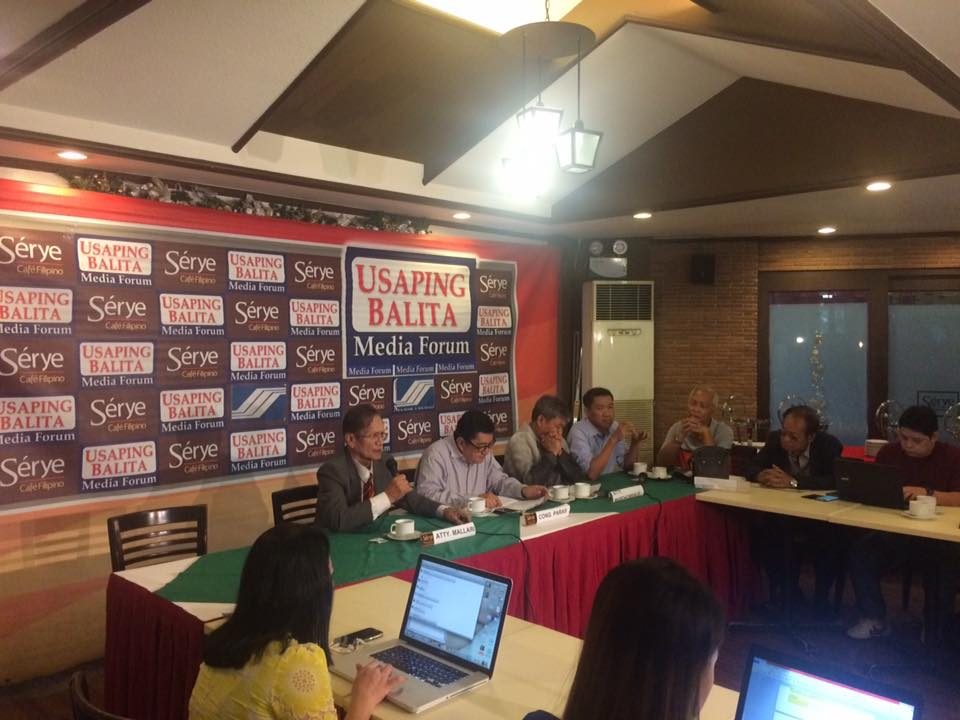 MANILA, Philippines (UPDATED) – Lawyers allied with the Volunteers Against Crime and Corruption (VACC) said on Thursday, November 9, that they are preparing to file several cases against Senator Antonio Trillanes IV, including inciting to sedition.

The lawyers, including former Negros Oriental representative Jacinto Paras and Manny Luna, cited Trillanes’ privilege speech at the Senate on October 3, as the basis of the complaint they will file next week.

In his speech, Trillanes accused President Rodrigo Duterte of having millions worth of transactions in his bank accounts.

“Kung makikita ito ng mga sundalo, M-60 and gagamitin say’o kasi marami-rami ito. Mauubos ‘yung magasin, kung P40 million ‘yung hinahanap mo (If soldiers can see this, they would use their M-60s on you, because there’s so many of this. You will run out of magazine if you’re looking for P40 million),” the opposition senator had said.

The context of Trillanes’ statement is that Duterte had claimed he didn’t have more than P40 million in his bank accounts, and said that if anyone can disprove him, “You can shoot me or overthrow me.”

Paras and Luna see Trillanes’ response as directly encouraging the military to kill the President, which they said is tantamount to the crime of inciting to sedition.

“Trillanes has the tendency to do extralegal acts, kaya siya naging senator, kaya hindi malayo na gawin nya ulit ito na tinatawagan niya ang militar na patayin and Pangulo (that’s why he became a senator, that’s why it’s not unlikely for him to do this, to call on the military to call the President),” Paras said.

Under Article 139 of the Revised Penal Code sedition is defined as:

Asked what particular definition will be cited, Paras cannot name the specific provision and said it will be included in their case buildup.

Luna said they will also file other complaints against Trillanes, one for alleged proposal to commit coup d’etat which is punishable under Article 136 of the Revised Penal Code.

The other is a complaint for alleged violation of Section 14(c) of Republic Act 9160 or the Anti-Money Laundering Act.

The provision penalizes “any person who, with malice, or in bad faith, reports or files a completely unwarranted or false information relative to money laundering transaction against any person.” It is equivalent to jailtime of 6 months to 4 years.

The planned complaint stems from Trillanes’ statements pertaining to Duterte’s bank accounts. The lawyers claimed that the bank accounts are false, even though Overall Deputy Ombudsman Arthur Carandang had said that he was in possession of Duterte bank records that show a flow of almost P1 billion. (READ: Calida threatens Ombudsman with lawsuit, impeachment)

Luna and Paras had earlier filed a complaint against Carandang before the Office of the Executive Secretary.

Luna said they are also preparing a graft complaint against Trillanes for allegedly causing undue injury to the government, but did not say where they will file it.

Graft is under the jurisdiction of the Office of the Ombudsman. So are officials with the salary grade of Trillanes, but that rule has been in the grey area lately because of the recent Supreme Court ruling that allowed the Department of Justice, and the Regional Trial Court, to exercise jurisdiction over Senator Leila de Lima’s drug trade case.

“It is our civic duty to protect the government if there are forces moving to bring it down,” Luna said.

Trillanes on Thursday welcomed VACC’s cases against him “no matter how absurd [they] may seem.”

“I actually welcome them because, as part of my legal defense, I would be able to prove my claim on Duterte’s ill-gotten wealth. Specifically, I would be able to ask the court to subpoena his bank documents as an exemption to the Bank Secrecy Law,” he said in a statement. – with a report from Jee Geronimo/Rappler.com