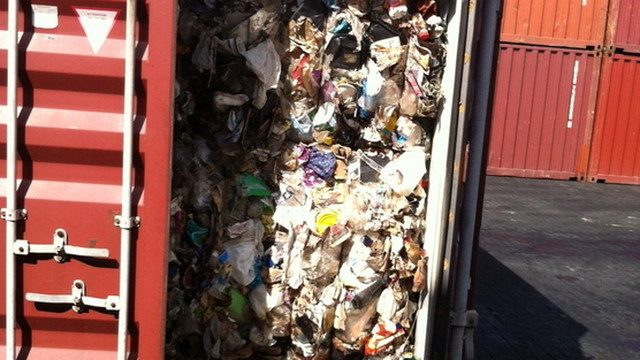 Facebook Twitter Copy URL
Copied
'We are waiting on the President to make good on his campaign promise to hold Canada and Trudeau accountable for their trash,' says environmental group BAN Toxics, as both leaders attend the APEC Summit in Vietnam

MANILA, Philippines – An environmental group on Thursday, November 9, renewed its call for President Rodrigo Duterte to make sure that Canada’s garbage that was illegally dumped in the Philippines in 2013 will be returned to its source.

“We are waiting on the President to make good on his campaign promise to hold Canada and Trudeau accountable for their trash,” BAN Toxics’ Anna Kapunan said in a statement on Thursday, a day after Duterte arrived in Vietnam for the Asia-Pacific Economic Cooperation (APEC) Leaders’ Summit.

Duterte and Canadian Prime Minister Justin Trudeau are attending this year’s APEC Summit. There is no scheduled bilateral meeting between the two leaders, so far, but there’s a chance for them to meet casually on the sidelines of the annual event.

Trudeau also confirmed his attendance to the Canada-ASEAN Commemmorative Summit in Manila. Malacañang has not announced any scheduled bilateral meeting between the Canadian leader and Duterte in Manila.

In its statement, BAN Toxics reminded Duterte that during the 2016 presidential elections, he himself expressed outrage over Canada’s failure to “re-import” its own garbage

In 2015 – a year before he was elected – Duterte even urged his predecessor’s administration to lodge a diplomatic protest against the Canadian government for its 1,300-ton trash which was misdeclared in 2013 as assorted scrap plastic materials for recycling.

Instead, what the Bureau of Customs seized were 50 container vans carrying various waste materials, including non-recyclable plastics and adult diapers, imported from Canada.

“Canadian trash has been rotting in the Port of Manila for several years. Trudeau should take it back with him home to Canada,” Kapunan said on Thursday.

BAN Toxics slammed what it called “the Canadian solution,” which is “to wait and hope Filipinos forget” – a reference to Trudeau’s answer when he was confronted with the issue in 2015 when he had a press conference on the sidelines of the APEC Summit in Manila.

Trudeau said then that he was aware of the issue, and that “there is a Canadian solution in the process of being developed.” (READ: Canada PM Trudeau on trash: We’re working on laws for future)

The environmental group also urged the Department of Foreign Affairs and Foreign Affairs Secretary Alan Peter Cayetano to lodge a diplomatic protest against Canada, and to re-open the issue in the Basel Convention.